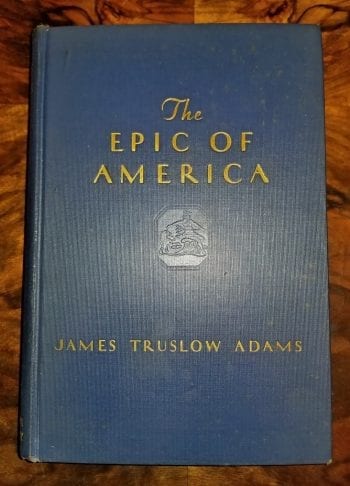 PRESENTING A RARE EARLY EDITION hardback copy of The Epic of America by James Truslow Adams, Illustrated by M.J. Gallagher, Published by Little, Brown and Company of Boston in 1932.

This RARE book is in good condition for its age….. some very minor ‘knicks’ on the edges of the hardcover….some minor spotting on the cover and spine.

The book is a VERY EARLY EDITION with the First Edition only been published in 1931!!

This is a RARE Early Edition!! James Truslow Adams (October 18, 1878 – May 18, 1949)[1] was an American writer and historian. He was a freelance author who helped to popularize the latest scholarship about American history and his three-volume history of New England is well regarded by scholars.

Adams was born in Brooklyn, New York, to a wealthy family, the son of Elizabeth Harper (née Truslow) and William Newton Adams, Jr.[3]

His father had been born in Caracas, Venezuela. His paternal grandfather William Newton Adams Sr. was American with roots in Virginia and his paternal grandmother Carmen Michelena de Salias was a Venezuelan of Spanish(Basque) descent.[4][5][6][7]

Adams took his bachelor’s degree from the New York University Tandon School of Engineering (then Polytechnic Institute of Brooklyn) in 1898, and a MA degree from Yale University in 1900. He entered investment banking, rising to partner in a New York Stock Exchange member firm.[3] In 1912, he considered his savings ample enough to switch to a career as a writer.

In 1917, he served with Colonel House on President Wilson’s commission, “The Inquiry“, to prepare data for the Paris Peace Conference.[3] By 1918, he was a captain in the Military Intelligence Division of the General Staff of the U.S. Army.[3] By late 1918, he was selected for the U.S. delegation to the Paris Peace Conference.[3] His main task consisted in the provision of maps and the selection of plans and atlases that should be acquired by the War College, the American Geographical Society, and the Library of Congress.

Adams gained national attention with his trilogy on the history of New England (1921–26), winning the Pulitzer Prize for the first volume. Scholars welcomed his social history of the colonial era, Provincial Society, 1690-1763 (1927). He wrote popular books and magazine articles in a steady stream. His Epic of America was an international bestseller, and was included in Life Magazine’s list of the 100 outstanding books of 1924-1944.[8] He was also the editor of a scholarly multi-volume Dictionary of American History.[9] Adams was the editor, with Roy V. Coleman as managing editor, of The Atlas of American History (New York: Charles Scribner’s Sons, 1943), and The Album of American History, 4 vols. (New York: Charles Scribner’s Sons, 1944).

Adams coined the term “American Dream” in his 1931 book The Epic of America.[11] His American Dream is “that dream of a land in which life should be better and richer and fuller for everyone, with opportunity for each according to ability or achievement. It is a difficult dream for the European upper classes to interpret adequately, and too many of us ourselves have grown weary and mistrustful of it. It is not a dream of motor cars and high wages merely, but a dream of social order in which each man and each woman shall be able to attain to the fullest stature of which they are innately capable, and be recognized by others for what they are, regardless of the fortuitous circumstances of birth or position.”[12]

However, Adams felt the American Dream was in peril during the 1920s and 30s. He complained that “money making and material improvements . . . mere extensions of the material basis of existence,” had gained ascendancy, becoming “goods in themselves . . . [mimicking] the aspects of moral virtues.” The original American Dream had always been about “quality and spiritual values”: “The American dream that has lured tens of millions of all nations to our shores in the past century has not been a dream of merely material plenty, although that has doubtless counted heavily. It has been much more than that.” He warned that “in our struggle to ‘make a living’” we were neglecting “to live.” The Epic of America was his attempt save a “priceless heritage,” and sustain the distinctly American understanding of progress in humane and moral terms. The true American Dream was of “a genuine individual search and striving for the abiding values of life,” and for the “common man to rise to full stature” in the free realms of “communal spiritual and intellectual life.”

Adams lived in Southport, Connecticut, where he died of a heart attack. ← Poetic Works of Coleridge Edited by William B. Scott
Genealogies and Sketches of Some Old Families of VA and KY by BF Van Meter →