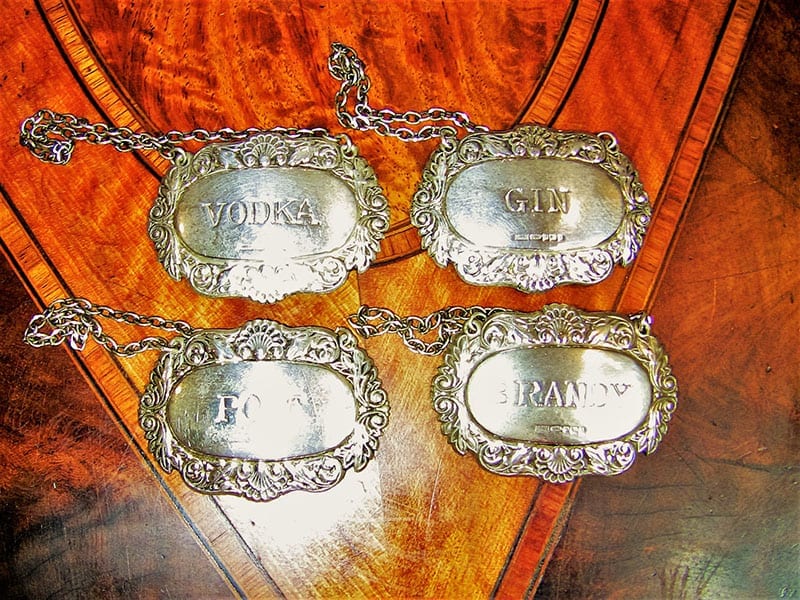 ONE DEFINITELY FOR THE LIQUOR LOVER !!!!!

BRITISH SILVER: A silver object that is to be sold commercially is, in most countries, stamped with one or more silver hallmarks indicating the purity of the silver, the mark of the manufacturer or silversmith, and other (optional) markings to indicate date of manufacture and additional information about the piece. In some countries, the testing of silver objects and marking of purity is controlled by a national assayer’s office.

Hallmarks are applied with a hammer and punch, a process that leaves sharp edges and spurs of metal. Therefore, hallmarking is generally done before the piece goes for its final polishing.
Hallmarks on British sterling (L-R): Crown signifying city of Sheffield, lion passant, Letter n of a style dating piece to 1905, maker’s insignia for Walker & Hall.
1680 maker’s mark on base of a candlestick, for Robert Cooper, London

The hallmark for sterling silver varies from nation to nation.
One of the most highly structured hallmarking systems in the world is that of the United Kingdom, (Scotland, England, Wales and Northern Ireland), and Ireland. These five nations have, historically, provided a wealth of information about a piece through their series of applied punches:
London assay office hallmarks on the back of a waiter, or small square salver. Marks indicate it is Britannia gauge silver made by (or for) Paul de Lamerie (taken to or) in London and dated 1732 (it could have been made a year or two earlier than 1732).

A stamp indicating the purity of the silver is called the assayer’s mark. The mark for silver meeting the sterling standard of purity is the Lion Passant, but there have been other variations over the years, most notably the mark indicating Britannia purity. The Britannia standard was obligatory in Britain between 1697 and 1720 to try to help prevent British sterling silver coins from being melted to make silver plate. It became an optional standard thereafter, and in the United Kingdom and Ireland is now denoted by the millesimal fineness hallmark “958”, with the symbol of Britannia being applied optionally. The purity mark for Irish silver is the harp crowned.
The date mark is a letter indicating the exact year in which the piece was made. The typeface, whether the letter is uppercase or lowercase, and even the shape inside which the letter is stamped, must all be taken together to determine the year.
The city mark is used to indicate the city in which the piece was assayed. For example, a crown of a certain style indicated the city of Sheffield, while an anchor indicated the city of Birmingham.
Each silver maker has his or her own, unique maker’s mark. This hallmark is usually a set of initials inside an escutcheon.
Irish silver also contains the image of Hibernia. This mark was introduced in 1730, and is still in use today.

The series of hallmarks described above are still in use in today.

However, there are two silver hallmarks that have been discontinued:

Beginning on 1 December 1784, British law mandated that a duty mark be applied to silver pieces. This showed that the requisite tax had been paid to the Crown. The duty mark was a profile of the head of the current reigning monarch. The mark was discontinued in 1890.
An additional British hallmark that is no longer used is the tally mark, which was the unique mark of a journeyman finishing his apprenticeship. These marks were used as a record of the pieces made by each journeyman so that each could be given proper payment.