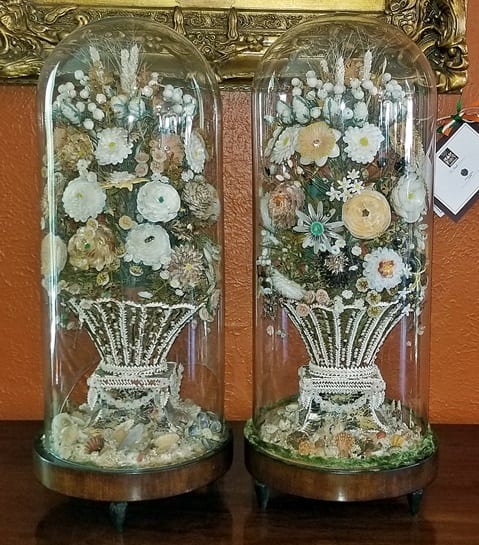 These are a MATCHING PAIR of EXTREMELY HIGH QUALITY and EXTREMELY RARE Shell Art Floral Bouquets, under Glass Domes and on mahogany stands.

YOU WILL ONLY FIND A PAIR LIKE THIS IN THE VICTORIA & ALBERT MUSEUM IN LONDON, UK  !!!

THESE ARE HIGHLY DESIRABLE AND HUGELY IMPORTANT 19th CENTURY PIECES !!

We have only been able to find a pair like this in the V. & A. in London and a single one at the Brooklyn Museum.

CHECK OUT THIS PAIR THAT SOLD AT SOTHEBY’S IN 2010:

The Victoria and Albert Museum (often abbreviated as the V&A), London, is the world’s largest museum of decorative arts and design, housing a permanent collection of over 4.5 million objects. It was founded in 1852 and named after Queen Victoria and Prince Albert. The V&A is located in the Brompton district of the Royal Borough of Kensington and Chelsea, in an area that has become known as “Albertopolis” because of its association with Prince Albert, the Albert Memorial and the major cultural institutions with which he was associated. These include the Natural History Museum, the Science Museum and the Royal Albert Hall. The museum is a non-departmental public body sponsored by the Department for Culture, Media and Sport. Like other national British museums, entrance to the museum has been free since 2001.

The V&A covers 12.5 acres (5.1 ha)[3] and 145 galleries. Its collection spans 5,000 years of art, from ancient times to the present day, from the cultures of Europe, North America, Asia and North Africa. The holdings of ceramics, glass, textiles, costumes, silver, ironwork, jewellery, furniture, medieval objects, sculpture, prints and printmaking, drawings and photographs are among the largest and most comprehensive in the world. The museum owns the world’s largest collection of post-classical sculpture, with the holdings of Italian Renaissance items being the largest outside Italy. The departments of Asia include art from South Asia, China, Japan, Korea and the Islamic world. The East Asian collections are among the best in Europe, with particular strengths in ceramics and metalwork, while the Islamic collection is amongst the largest in the Western world. Overall, it is one of the largest museums in the world.

Since 2001, the museum has embarked on a major £150m renovation programme,[4] which has seen a major overhaul of the departments, including the introduction of newer galleries, gardens, shops and visitor facilities.

New 17th- and 18th-century European galleries were opened on 9 December 2015. These restored the original Aston Webb interiors and host the European collections 1600–1815.

Victorians were obsessed with all things involving Nature.

After Darwin’s Publication of the Origin of the Species, Victorians were determined to discover more about Nature and Science.

Exploration and collecting of Natural Things became an obsession.

Besides going outside, Victorians brought nature into their homes. Greenhouses provided flowers and plants year round. Conservatories built in or added to the house brought the room full of greenhouse plants and flowers into the house. Taxidermy was another popular way of bringing nature into the Victorian home.

Looking on the Internet under Victorian taxidermy can produce a variety of images. These include animal hooves employed in many ways and for many uses. Elephant leg umbrella stands can be found and so can animal skins adorning various objects. One amazing find is the work of Walter Potter who, using small animals, such as kittens and baby rabbits, produced dioramas that mimicked human life. One was the “Kitten Tea Party” and another was the “Kitten Wedding.”

Many places, including the drawing room would have “under glass” a display of small and colorful songbirds sitting on branches of a tree. This was a common accessory in Victorian parlors. To be “one with nature,” Victorian ladies sometimes incorporated feathers into the bodice of a dress. Or real stuffed birds could adorn hats, while small bugs and even small birds could be incorporated into jewelry.

How many readers once had a key chain that held a rabbit’s foot for good luck? A key chain is one thing but how about having earrings made from rabbits’ feet or a necklace made from paws of other small animals or heads of birds? The proper Victorian lady could not be squeamish if she was to join the crowd that brought nature into the home and into the lives of the family.

Exotic Shells from far-flung places were combined to make a STUNNING Floral Display and placed under Glass Domes for protection.

These pieces of ART were truly TREASURED and only the VERY WEALTHIEST AND AFFLUENT  OF VICTORIANS could have afforded these !

What a statement of ostentatiousness in your home !

We are of the opinion that these pieces of Shell Art were probably made in the mid-19th Century….circa 1840-60. They are possibly Italian (as the one in the Brooklyn Museum)….but we are of the belief that they are British mainly because of the flower types displayed and the British Regency style Plinth or Platform.

Each Display has a mahogany base, with pointed finial tripod feet, which in turn, have a bottom layer of loose shells, sea-life etc. On this sits a Pedestal made of shell to resemble tortoiseshell. It is in turn surrounded with shell swags and shell bordering and molding. On top of the Pedestal sits an Open Basket made again of shell. The Basket is to replicate a basket of flowers. Extending upwards from the basket is the MOST AMAZING Floral Display….all again made of shell to replicate various types of flowers including posies, pansies, marigolds, hydrangias, roses, buds and sheaf’s of wheat. SIMPLY STUNNING !!!

THESE ARE MUSEUM QUALITY PIECES !!

Condition: The Pair are overall in SUPERB CONDITION. One of the glass domes is broken to the rear.

These is some slight damage….but only minor in nature….through the passage of time. With the broken dome replaced we would be tempted to describe these as near MINT ! They are most definitely MUSEUM QUALITY PIECES.

Provenance: From the Private Collection of a High-End Antique Collector over over 30 years