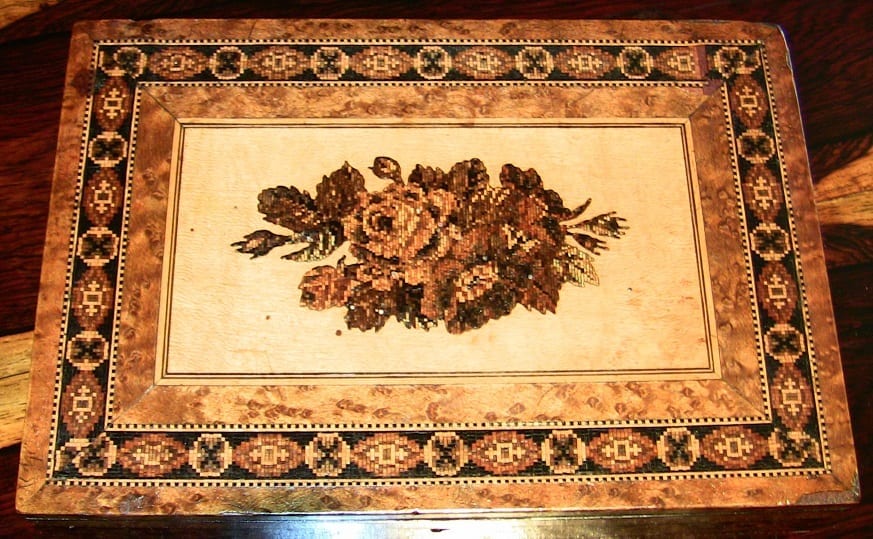 Tunbridge ware is a form of decoratively inlaid woodwork, typically in the form of boxes, that is characteristic of Tonbridge and the spa town of Tunbridge Wells in Kent in the 18th and 19th centuries. The decoration typically consists of a mosaic of many very small pieces of different coloured woods that form a pictorial vignette. Shaped rods and slivers of wood were first carefully glued together, then cut into many thin slices of identical pictorial veneer with a fine saw. Elaborately striped and feathered bandings for framing were pre-formed in a similar fashion.

The famous makers of Tunbridge ware were in the Tunbridge Wells area of Kent; their most notable work was from about 1830 to 1900.

Early makers of Tunbridge ware, in Tunbridge Wells in the mid 18th century, were the Burrows family, and Fenner and Co. In the 19th century, around 1830, James Burrows invented a technique of creating mosaics from wooden tesserae. Henry Hollamby, apprenticed to the Burrows family, set up on his own in 1842 and became an important manufacturer of Tunbridge ware, employing about 40 people.[2] 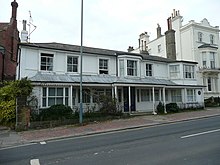 “The Chalet”: home and workshop of Edmund Nye and Thomas Barton, Tunbridge Wells

In Tonbridge (near to Tunbridge Wells), George Wise (1703-1779) is known to have had a business in 1746. It continued with his son Thomas, and Thomas’s nephew George (1779-1869), who took over in 1806. In its early years the company made articles such as workboxes and tea caddies with prints of popular views; later items had pictures created from mosaics. Their workshop in Tonbridge, Wise’s Tunbridge Ware Manufactory, was next to the Big Bridge over the Medway; the building was demolished in 1886 to widen the approach to the bridge.[3]

At the Great Exhibition of 1851, Tunbridge ware by Edmund Nye, Robert Russell and Henry Hollamby was shown; Edmund Nye received a commendation from the judges for his work. He exhibited a table depicting a mosaic of a ship at sea; 110,800 tesserae were used in making the picture. [1][4]

The manufacturers of Tunbridge ware were cottage industries, and they were no more than nine in Tunbridge Wells and one in Tonbridge. The number declined in the 1880s; competent craftsmen were hard to find, and public tastes changed. After the death of Thomas Barton in 1903 the only surviving firm was Boyce, Brown and Kemp, which closed in 1927.

The micro-mosaic is made up of thousands of tiny pieces of wood, in various colors, assembled to form an inlay and geometric pattern on the box.

This box has a micro-mosaic floral design as its central motif. It is banded on the lid and sides with more gorgeous micro-mosaic patterns.

The box itself is probably made of a combination of boxwood and raw mahogany. The wooden case is clearly irrelevant as the beauty of this piece is in its micro-mosaic overlay.

The interior is lined in its original burgundy colored red velvet and vinyl.

The interior of the lid doubles as a small writing slope.

This piece is in great condition having regard to its age, use and construction…..it retains almost all of its original mosaic…..miraculous for these types of pieces !!

Provenance: Bought in the UK