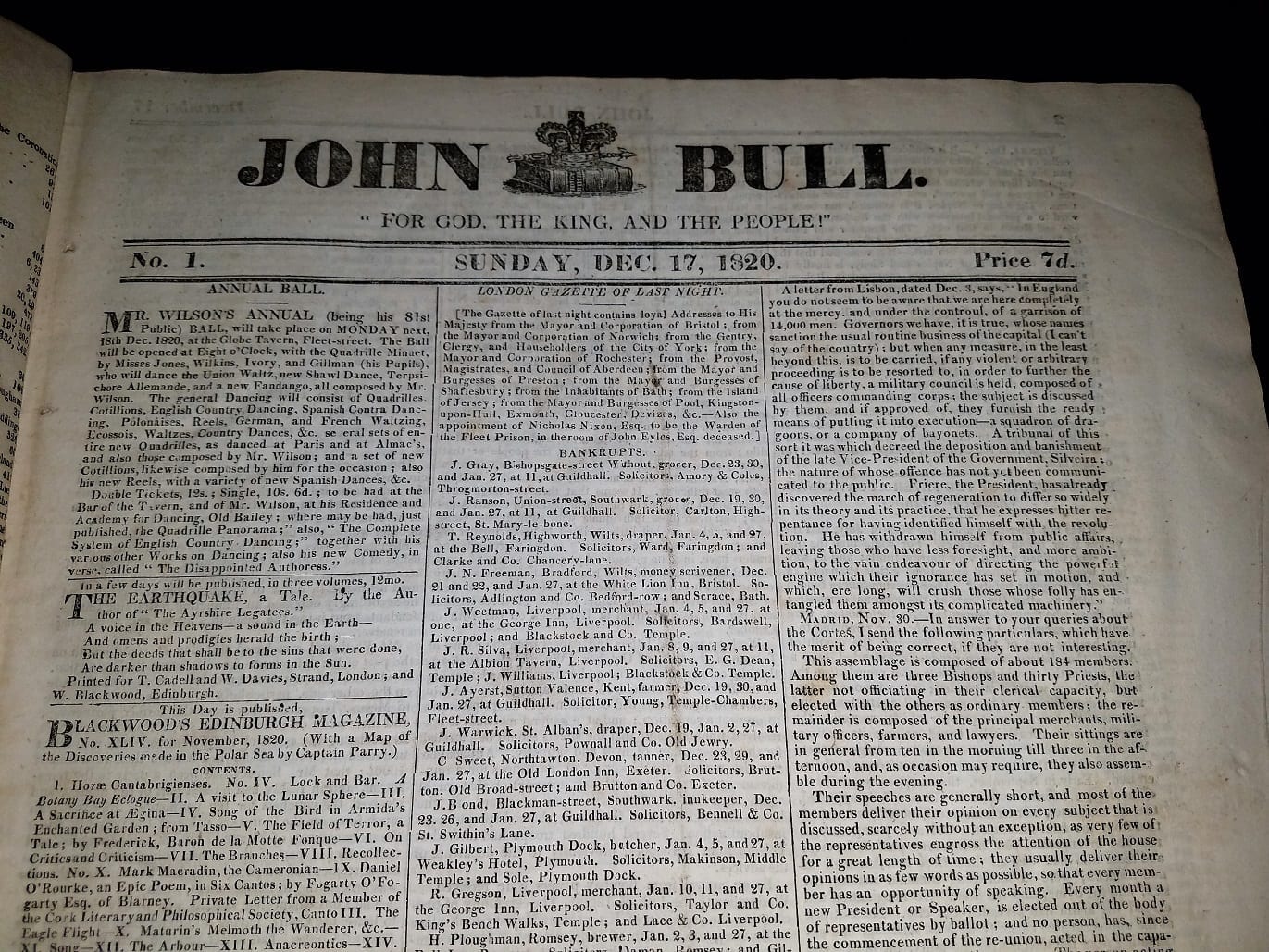 All the weekly newspaper publications of John Bull for the years 1820 to 1829 (Inclusive)……….bound together and sold as ‘Annuals’.

THIS IS SUCH A RARE FIND ….. YOU WILL NOT FIND THESE ANYWHERE ELSE ….TRULY HISTORIC!

IT CONTAINS THE VERY FIRST EDITION EVER PRINTED! John Bull is a national personification of the United Kingdom in general and England in particular,[1] especially in political cartoons and similar graphic works. He is usually depicted as a stout, middle-aged, country dwelling, jolly, matter-of-fact man.

John Bull originated in the creation of Dr. John Arbuthnot, a friend of Jonathan Swift (author of Gulliver’s Travels) and satirist Alexander Pope in 1712, and was popularised first by British print makers. Arbuthnot created Bull in his pamphlet Law is a Bottomless Pit (1712).[2] The same year Arbuthnot published a four-part political narrative The History of John Bull. In this satirical treatment of the War of the Spanish Succession a bold, honest and forthright clothier John Bull brings a lawsuit against various figures intended to represent the kings of France and Spain as well as institutions both foreign and domestic.[3]

Originally derided, William Hogarth and other British writers made Bull “a heroic archetype of the freeborn Englishman.”[2] Later, the figure of Bull was disseminated overseas by illustrators and writers such as American cartoonist Thomas Nast and Irish writer George Bernard Shaw, author of John Bull’s Other Island.

Starting in the 1760s, Bull was portrayed as an Anglo-Saxon country dweller.[2] He was almost always depicted in a buff-coloured waistcoat and a simple frock coat (in the past Navy blue, but more recently with the Union Jack colours).[2] Britannia, or a lion, is sometimes used as an alternative in some editorial cartoons.

As a literary figure, John Bull is well-intentioned, frustrated, full of common sense, and entirely of native country stock. Unlike Uncle Sam later, he is not a figure of authority but rather a yeoman who prefers his small beer and domestic peace, possessed of neither patriarchal power nor heroic defiance. Arbuthnot provided him with a sister named Peg (Scotland), and a traditional adversary in Louis Baboon (the House of Bourbon[4] in France). Peg continued in pictorial art beyond the 18th century, but the other figures associated with the original tableau dropped away. John Bull himself continued to frequently appear as a national symbol in posters and cartoons as late as World War I.

The original John Bull was a Sunday newspaper established in the City, London EC4, by Theodore Hook in 1820………THIS COLLECTION CONTAINS THE ORIGINAL OF THE VERY FIRST EDITION!!!!!

It was a popular periodical that continued in production through July 1892.[2] Titles with the same name were being published until 1960.[3]

A magazine of that name was reportedly being published in 1899 and 1903.[4] Horatio Bottomley, an MP for the Liberal Party, became the publisher of the magazine on 12 May 1906. It continued production during the First World War.[5] Howard Cox estimates its sales by August 1914 at in excess of three quarters of a million copies a week.[6] By the end of October 1914 the cover of John Bull was ‘”boasting that the magazine’s circulation was the largest of any weekly journal in the world”. It was the subject of a libel case in 1919 concerning a biographical film about David Lloyd George.[7]

The magazine was published by Odhams from the late 1940s to the early 1960s. Similar in style to the iconic American magazine The Saturday Evening Post, the John Bull covers encapsulated post-war Britain and employed some of Britain’s finest illustrators. They also included short stories by major British authors such as H. E. Bates, Agatha Christie, Nicholas Monsarrat, N. J. Crisp, Gerald Kersh, J. B. Priestley and C. S. Forester. During its run it incorporated other magazines such as The Illustrated, Passing Show, News Review and Everybody’s Weekly. At one point, its picture editor was Elkan Allan.

Following a sharp drop in circulation, the magazine was renamed Today, The New John Bull in 1960.[3] It attempted to appeal to a younger readership with features on aspects of youth culture, such as rock and roll. In 1964, its circulation was just over 700,000, but advertising revenue did not meet its costs, and it was closed.[9] Officially, it was merged with Weekend magazine.

This Collection deserves to be in a Museum.

The set was previously owned by a Mr. “T. Larkins” and his name and Family Crest are embossed on the inside of the front cover on a number of the volumes.

They also have the original ‘duty stamp’ to show that they are ORIGINAL.

NOTE: THESE ARE BEING SOLD AS A SET AND WILL NOT BE ‘SPLIT-UP’.

Provenance: Purchased by me from a Private English Collector 23 years ago, in Ireland.

Condition: Some loose covers, losses to the bindings, some foxing and some creasing….but overall in relatively good condition….what do you expect ?? They are 200 years old!!