This is one of the FINEST old English Secretary’s we have ever had !

Made circa 1720 in England and made from the finest burl walnut and flamed mahogany.

It is a TOTALLY ORIGINAL PERIOD PIECE !

The drop down desk front opens to reveal 8 drawers and 4 cubbies with a central tabernacle with hidden drawer pillars on either side.

It is the central tabernacle door that intrigues the most !

It is inlayed with marquetry of walnut, mahogany, rosewood and satinwood to create a scene of a corridor with parquet or tiled flooring leading down a hallway to another arched door. The marquetry is done in a 3D or tunnel effect giving the illusion of peering down the hall way to the doorway at the end of the tunnel !

AMAZINGLY this is replicated on the doorway to the kneehole base !!!!!

The base section sits on 6 padded and fluted feet. It has 2 pull out supports on either side to support the drop down desktop.

Beneath that it has one large central drawer and 6 smaller drawers (3 on each pillar),

The kneehole section is recessed and has another inlayed door which opens by lock to reveal 2 shelves.

The dimensions of the kneehole are 23 inches tall, 11.2 inches wide and 5.25 inches deep. It also haas an arched molding to the front.

The Top Section is removeable and has 2 curved doors with curved pediments or crowns. The doors open to reveal 3 shelves.

The secondary woods on this piece are oak, as one would expect from an English period piece and likewise the dovetailing detail is exactly as expected.

The interior of the top section was painted green as some point in the 20th Century but this does not in any way detract from its originality, authenticity or value !!

George I (George Louis; German: Georg Ludwig; 28 May 1660 – 11 June 1727)[a] was King of Great Britain and Ireland from 1 August 1714 and ruler of the Duchy and Electorate of Brunswick-Lüneburg (Hanover) in the Holy Roman Empire from 23 January 1698 until his death in 1727. He was the first British monarch of the House of Hanover.

Born in Hanover to Ernest Augustus and Sophia of Hanover, George inherited the titles and lands of the Duchy of Brunswick-Lüneburg from his father and uncles. A succession of European wars expanded his German domains during his lifetime; he was ratified as prince-elector of Hanover in 1708. After the deaths in 1714 of his mother and his second cousin Anne, Queen of Great Britain, George ascended the British throne as Anne’s closest living Protestant relative under the Act of Settlement 1701. Jacobites attempted, but failed, to depose George and replace him with James Francis Edward Stuart, Anne’s Catholic half-brother.

During George’s reign, the powers of the monarchy diminished and Britain began a transition to the modern system of cabinet government led by a prime minister. Towards the end of his reign, actual political power was held by Robert Walpole, now recognised as Britain’s first de facto prime minister. George died of a stroke on a trip to his native Hanover, where he was buried. He is the most recent British monarch to be buried outside the United Kingdom.

George was born on 28 May 1660 in the city of Hanover in the Duchy of Brunswick-Lüneburg in the Holy Roman Empire.[b] He was the eldest son of Ernest Augustus, Duke of Brunswick-Lüneburg, and his wife, Sophia of the Palatinate. Sophia was the granddaughter of King James I of England through her mother, Elizabeth Stuart, Queen of Bohemia.[3]

For the first year of his life, George was the only heir to the German territories of his father and three childless uncles. George’s brother, Frederick Augustus, was born in 1661, and the two boys (known as Görgen and Gustchen by the family) were brought up together. Their mother was absent for almost a year (1664–65) during a long convalescent holiday in Italy, but corresponded regularly with her sons’ governess and took a great interest in their upbringing, even more so upon her return.[4] Sophia bore Ernest Augustus another four sons and a daughter. In her letters, Sophia describes George as a responsible, conscientious child who set an example to his younger brothers and sisters.[5]

By 1675 George’s eldest uncle had died without issue, but his remaining two uncles had married, putting George’s inheritance in jeopardy as his uncles’ estates might pass to their own sons, should they have had any, instead of to George. George’s father took him hunting and riding, and introduced him to military matters; mindful of his uncertain future, Ernest Augustus took the fifteen-year-old George on campaign in the Franco-Dutch War with the deliberate purpose of testing and training his son in battle.[6]

In 1679 another uncle died unexpectedly without sons, and Ernest Augustus became reigning Duke of Calenberg–Göttingen, with his capital at Hanover. George’s surviving uncle, George William of Celle, had married his mistress in order to legitimise his only daughter, Sophia Dorothea, but looked unlikely to have any further children. Under Salic law, where inheritance of territory was restricted to the male line, the succession of George and his brothers to the territories of their father and uncle now seemed secure. In 1682, the family agreed to adopt the principle of primogeniture, meaning George would inherit all the territory and not have to share it with his brothers.

Provenance: Acquired from an Quality Auction House in Tennessee.

With Desktop down it is 35 inches deep. 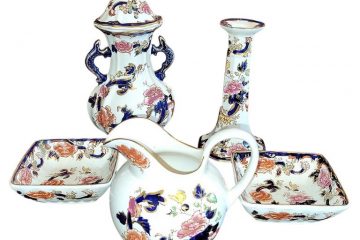