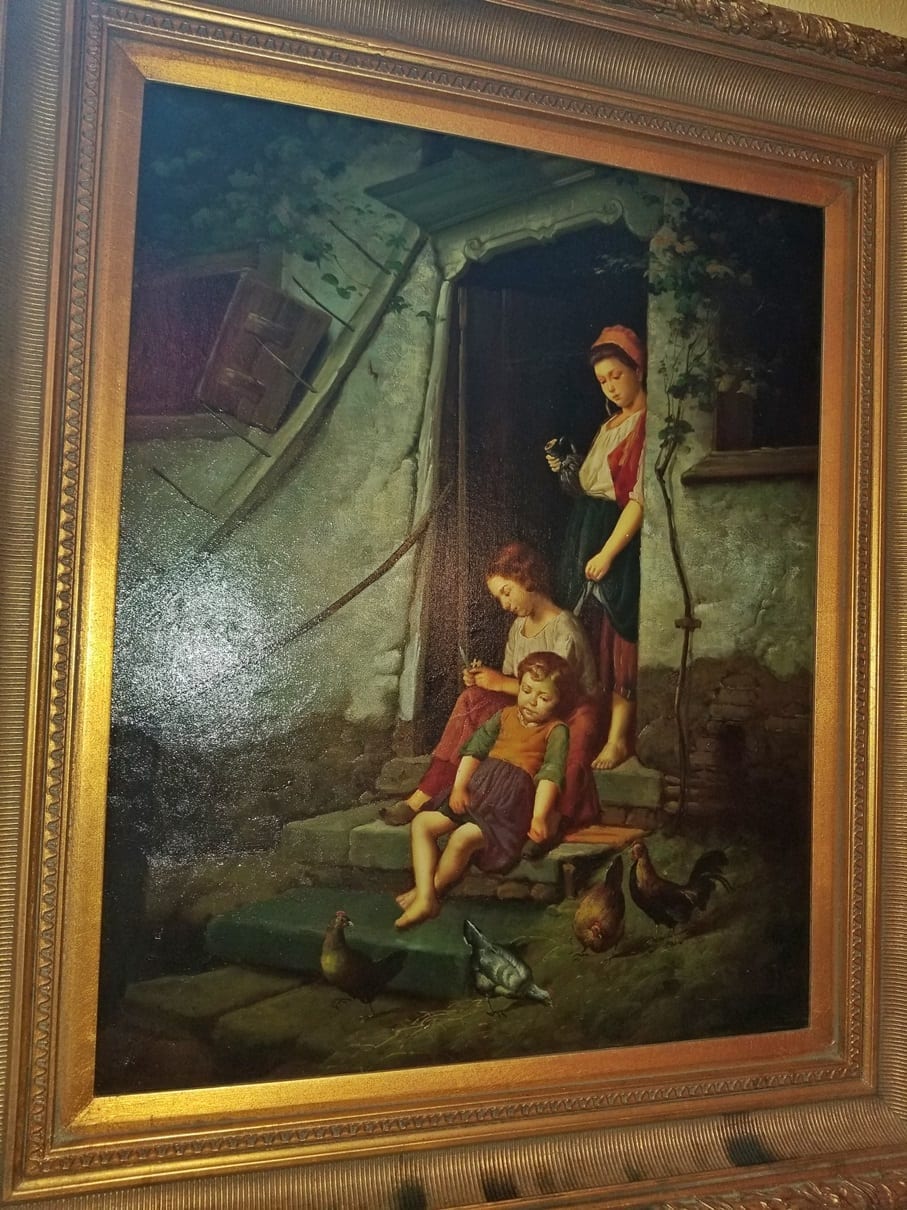 Depicts what appears to be a mother (or older sister) standing in a doorway of a cottage watching her two children feed chickens (hens and cocks). All are in rustic period dress. A simple and serene rustic scene! ROMANTICISM.

It is a large and imposing work of art, HIGHLY DECORATIVE and GREAT VALUE for money!!!

In art history, “Old Master” (or “old master“)[1][2] refers to any painter of skill who worked in Europe before about 1800, or a painting by such an artist. An “old master print” is an original print (for example an engraving or etching) made by an artist in the same period. The term “old master drawing” is used in the same way.

In theory, “Old Master” applies only to artists who were fully trained, were Masters of their local artists’ guild, and worked independently, but in practice, paintings produced by pupils or workshops are often included in the scope of the term. Therefore, beyond a certain level of competence, date rather than quality is the criterion for using the term.

In the eighteenth and nineteenth centuries, the term was often understood as having a starting date of perhaps 1450 or 1470; paintings made before that were “primitives”, but this distinction is no longer made. The Oxford English Dictionary defines the term as “A pre-eminent artist of the period before the modern; esp. a pre-eminent western European painter of the 13th to 18th centuries.” The first quotation given is from 1696, in the diary of John Evelyn: “My L: Pembroke..shewed me divers rare Pictures of very many of the old & best Masters, especially that of M: Angelo..,& a large booke of the best drawings of the old Masters.”[3] The term is also used to refer to a painting or sculpture made by an Old Master, a usage datable to 1824.[3] There are comparable terms in Dutch, French and German; the Dutch may have been the first to make use of such a term, in the 18th century, when oude meester mostly meant painters of the Dutch Golden Age of the previous century. Les Maitres d’autrefois of 1876 by Eugene Fromentin may have helped to popularize the concept, although “vieux maitres” is also used in French. The famous collection in Dresden at the Gemäldegalerie Alte Meister is one of the few museums to include the term in its actual name, although many more use it in the title of departments or sections. The collection in the Dresden museum essentially stops at the Baroque period.

The term tends to be avoided by art historians as too vague, especially when discussing paintings, although the terms “Old Master Prints” and “Old Master drawings” are still used. It remains current in the art trade. Auction houses still usually divide their sales between, for example, “Old Master Paintings”, “Nineteenth-century paintings” and “Modern paintings”. Christie’s defines the term as ranging “from the 14th to the early 19th century”. This painting is a LARGE oil on canvas, in its original Gilt wood frame..

Provenance: From a Private Collection in Dallas, TX but originally acquired in Europe.