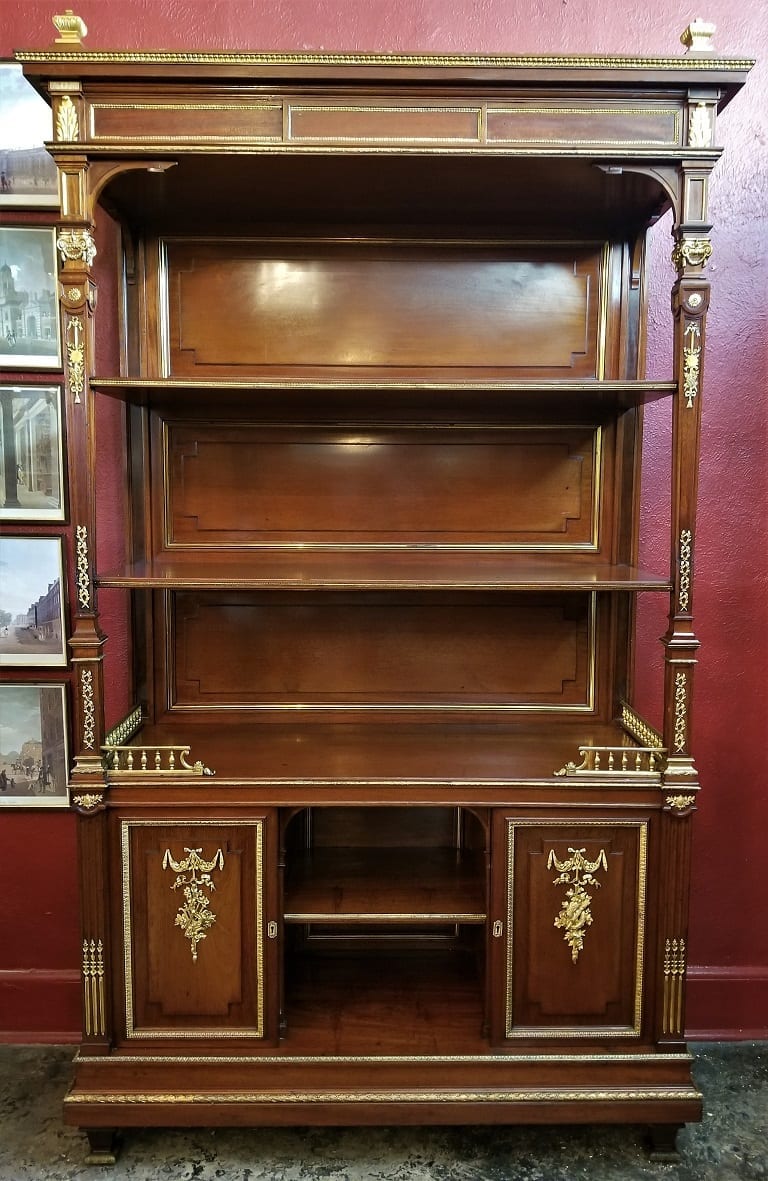 Made by the World Famous and Highly desirable maker ‘Portois & Fix’ in Vienna, Austria circa 1895.

Pieces by Portois & Fix are very rare and highly, highly desirable due to their EXCEPTIONAL QUALITY and RARITY !

This is a solid walnut cabinet with open shelves and the most stunning ormolu mounts throughout.

The top of the piece has ormolu molding or edging with 2 solid ormolu finials. The piece then has acanthus ormolu mounts atop 2 side pillars, each with corinthian column ormolu mounts and floral and musical/trumpet swags and wreaths.

It has 3 open shelves each fronted with ormolu molding and panels to the rear with brass ormolu banding.

The base consists of 2 central open shelves flanked on either side by 2 doors which open to reveal 2 additional shelves each.

The front of each door has the most stunning floral and musical (trumpet) swags and wreaths as it’s central motif.

The sides of the cabinet continue with fluted pillars/columns ending with spear shaped floral mounts.

The decoration of the piece is reflected on the sides also.

Portois & Fix was a major furniture manufacturer and interior decorator in Austria-Hungary . The company in 1881 from Vienna was founded Tapezierermeister Anton Fix (1846-1918) and the French [1] (other sources indicate Brussels) August Portois (1841-1895).

In 1842 Johann Fix founded a wallpapering workshop in Heumühlgasse 20 in the 4th district in Vienna . His son Anton took over in 1872 the operation. In the heyday of the company, Fix furnished flats of the Ringstraße buildings . At the World Fair in 1873 Fix received several awards.

In 1881, Anton Fix and furniture maker August Portois merged to form a single company and were thus able to provide complete home furnishings. In 1884 the furniture production was officially registered.

In 1883 the company was represented at the International Electrical Exhibition in Vienna. This was followed by orders from Germany, Russia, Turkey, Switzerland, Italy and Egypt. The two entrepreneurs opened branches in London, Milan, Paris, Wroclaw, Budapest, Cairo, Carlsbad, Bombay, Bucharest, Constantinople and Turin. In 1892, a “garde meuble” was built in Stadlau , where customers could have their furniture stored and repaired. Customers were the imperial court, imperial and royal highnesses, nobility, large industrialists, upper bourgeoisie as well as companies. At its peak, the company employed around 700 people. August Portois retired in 1892 from the company and returned to France, he died in 1895.

From 1897 to 1901, the architect Max Fabiani established the company headquarters at Ungargasse 59-61, in the 3rd district of Vienna ( Haus Portois & Fix ). This building had a spectacular façade for the time, with uniform, ornamented tiles. The young architect caused a scandal with the controversial architectural style.

From 1890 Portois & Fix worked closely with artists, especially later with the Wiener Werkstätte . With the execution of designs by Otto Wagner , Max Fabiani , Koloman Moser and Josef Hoffmann , Portois & Fix were among the greats of “Viennese Modernism” around 1900. At this time the company employs 700 people. Many works from this period were presented in craft exhibitions and published in craft magazines. The furniture of the Wiener Werkstätte can be seen in various museums today and can often be found in auction houses.

Anton’s son Robert Fix (1877-1945) had also profiled himself as a furniture designer in the company; until the death of his father in 1918 he worked in the company. After the demise of Anton Fix Robert had dedicated himself to painting, studied at the Academy of Fine Arts in Vienna and designed many things. With the end of the monarchy, however, the heyday of Portois & Fixslowly came to an end. After the First World War , the company still produced furniture.

The company Portois & Fix was run for years under the direction of other shareholders. From 1959 the company was registered as a sole proprietorship under Liselotte Simon (born August 2, 1919) and from 1974 under the direction of their daughter Brigitte Engelhardt. The address was at Barichgasse 30 in the 3rd district of Vienna. The company specialized in commissioned works such as the Burgtheater, State Opera House, Parliament, Spanish Riding School, branches of Creditanstalt and other banks, Augarten Porcelain, WIFI, ÖMV, ORF and the Royal Palace of Amman.

On June 16, 2004, the company was converted into a sole proprietorship, but today only repairs to existing facilities are carried out.

In the summer of 2008, the museum in the Austrian Post Savings Bank in cooperation with the Hofmobiliendepot showed an exhibition on Portois & Fix .

THIS PIECE IS FIT FOR A PALACE !

Provenance: From a Private Louisiana Collection.

Condition: There are 2 professional repairs to the central section of the front side pillars, but are not noticeable. Otherwise the piece is in excellent original condition.