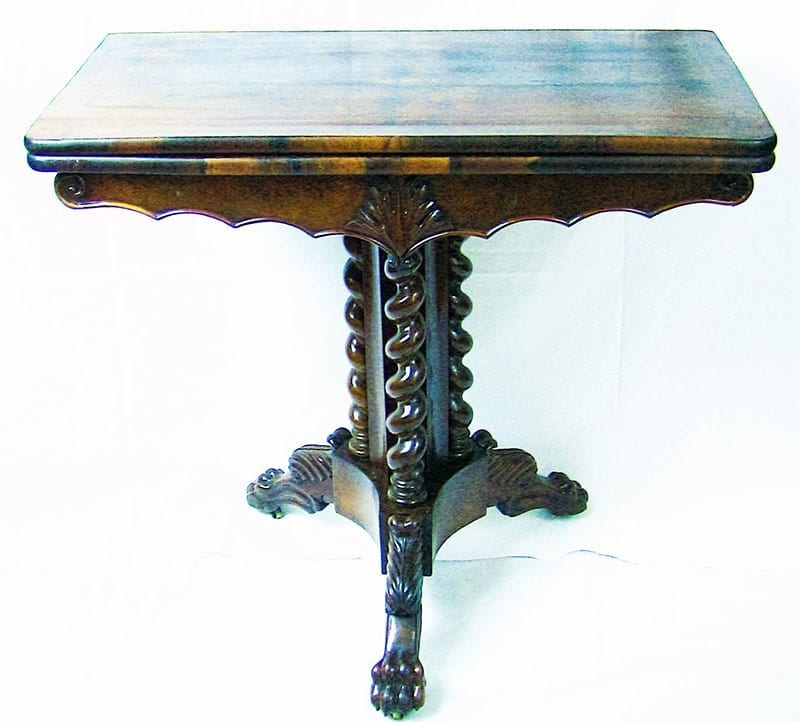 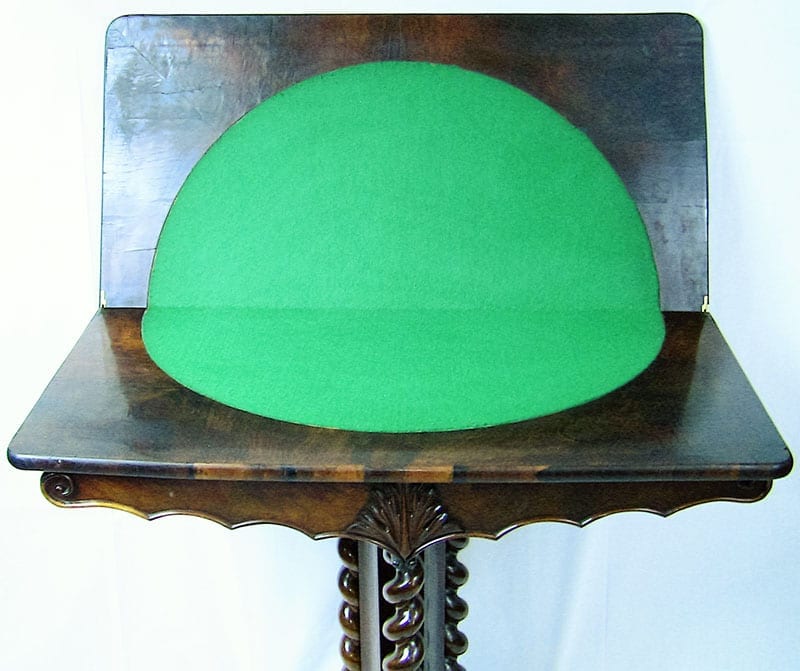 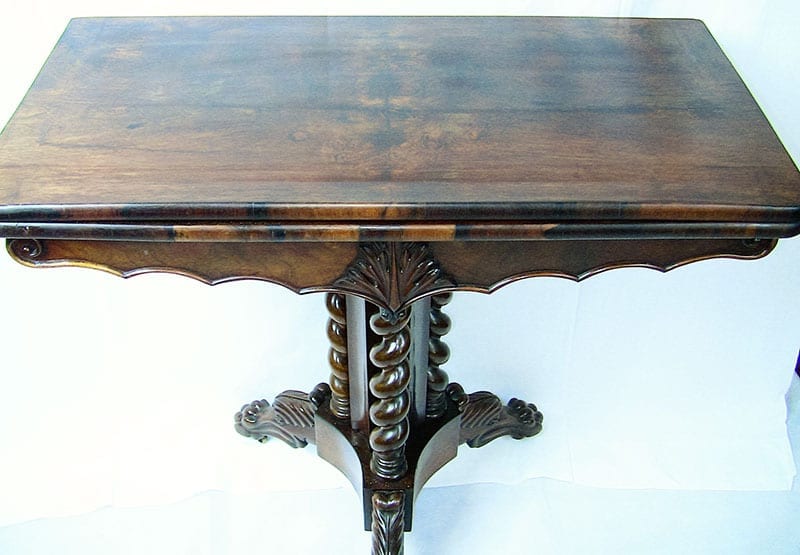 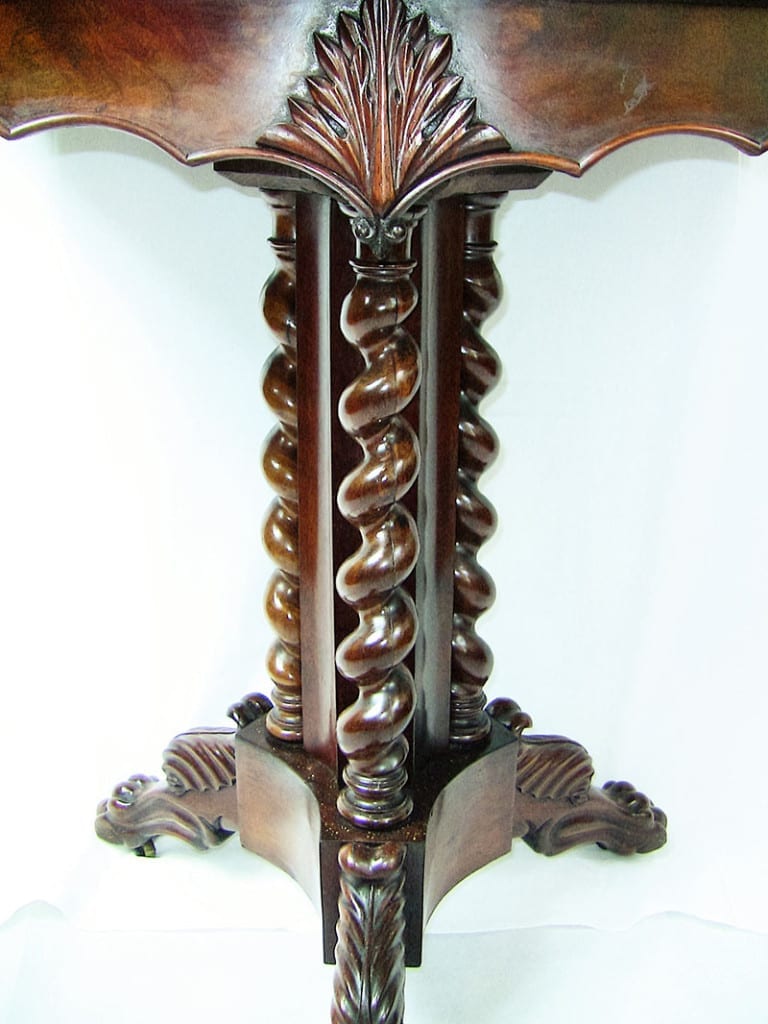 Central motif and tripod base
0
0 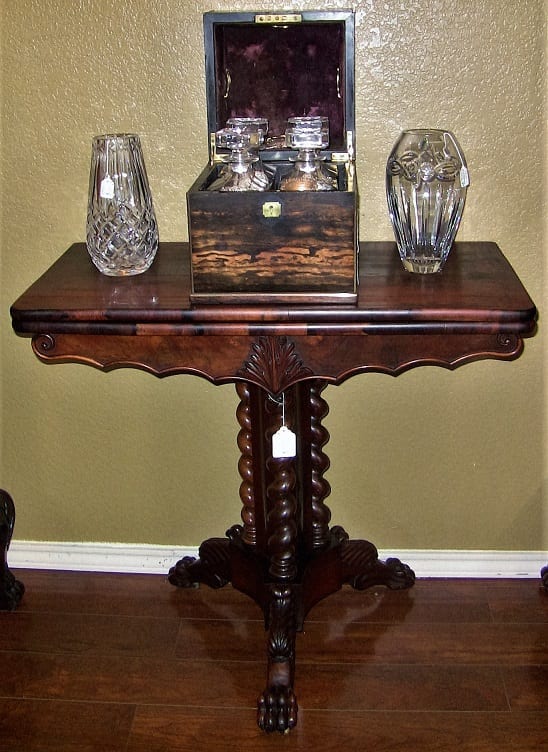 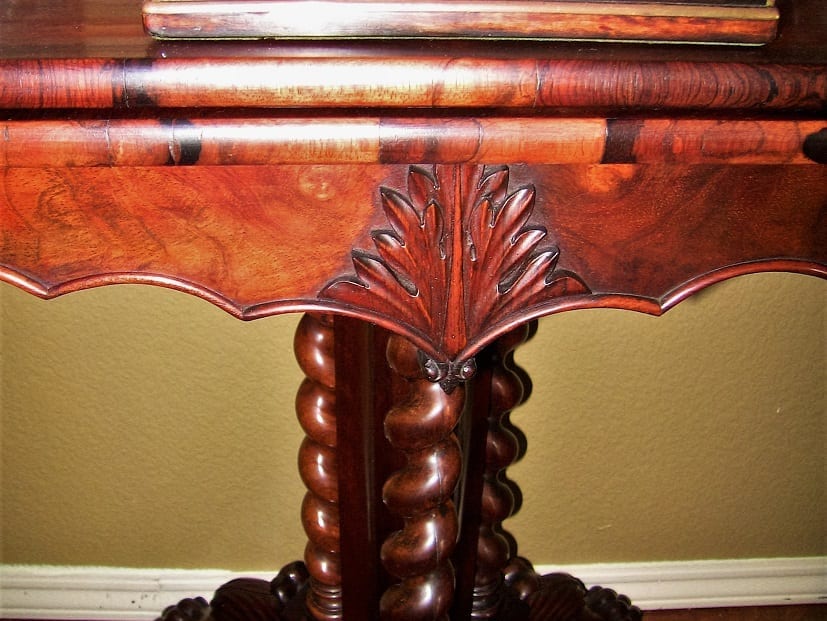 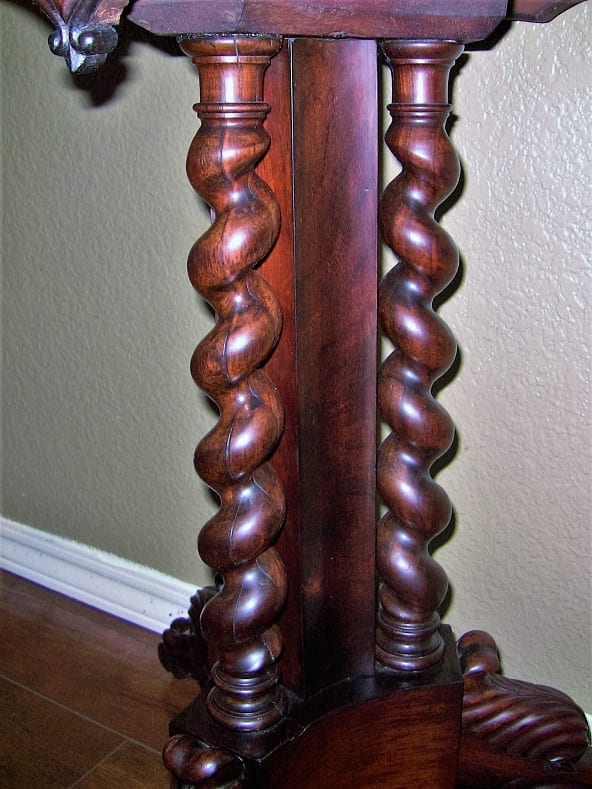 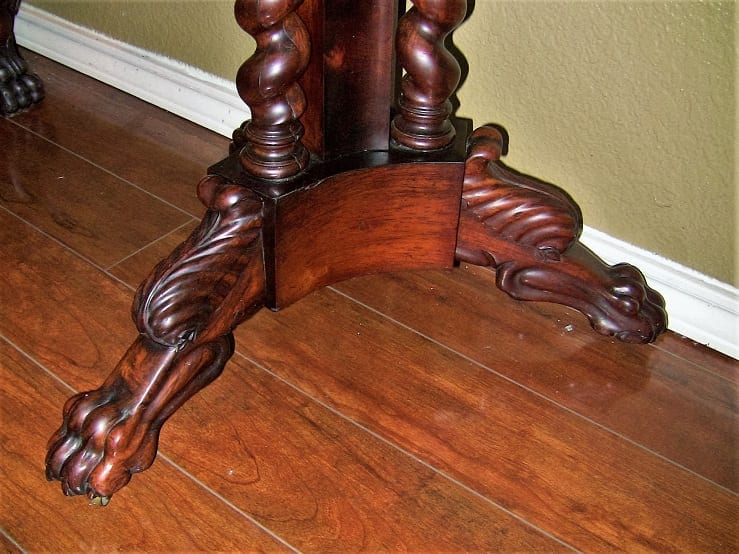 Lions paw feet and base carving
0
0 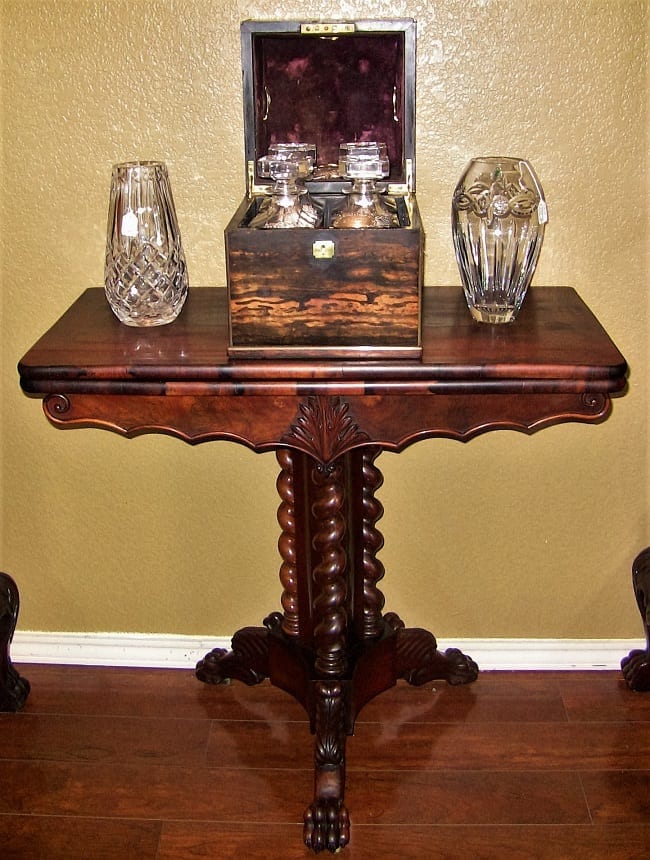 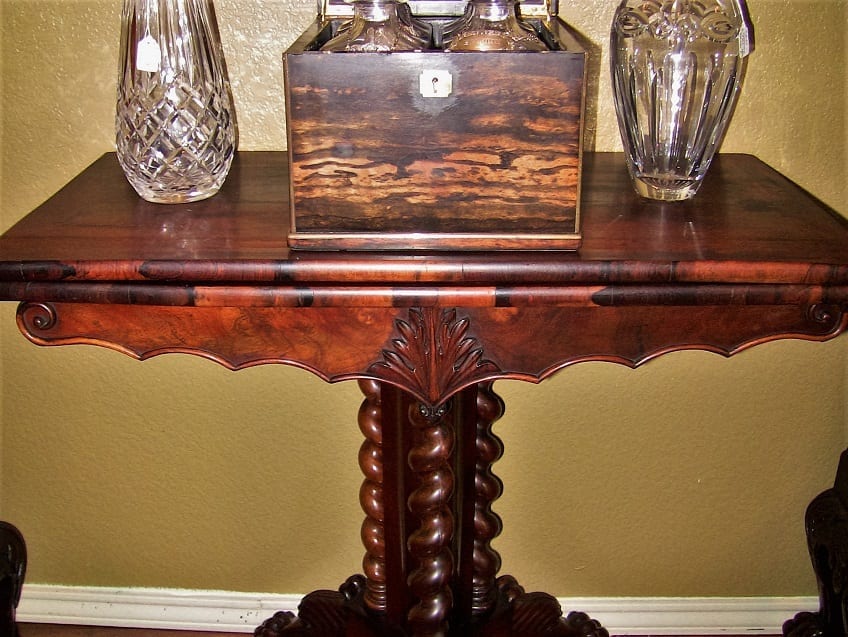 Made of mahogany……beautiful rich natural patina……from circa 1840…….barley twist central support columns…. Lions Paw feet (more reminiscent of Regency and William IV Styles) on tripod base with original brass castors…….beautiful scroll work to the front with acanthus leaf as the central motif.

Card Tables were very important to people in the 18th and 19th Centuries…….they had no TV or Internet and their main sources of entertainment were playing cards, music, dancing and story-telling.

Most card tables were made to be simple but functional. They did not ‘skimp’ on the quality of wood, however. Hence some beautiful mahogany and rosewood examples.

What makes this one stand out is not only the quality of the mahogany used….probably the finest Cuban mahogany…..but the detail to the base……it oozes QUALITY !!

Probably British but found in Ireland.

The central leaf motif is reminiscent of the use by top Irish makers of the use of scallop shells as a central motif.

THIS IS A HIGH END AND HIGH QUALITY ITEM !!!!

REGENCY CARD GAMES: Romances set in Regency England often depict the characters gambling, whether it be in gaming hells, at White’s, or even the hallowed halls of Almack’s. Regency people wagered on everything, card games, horse races, cock fights, and feats of daring. One story had the patrons at White’s taking bets on whether a man who collapsed on the doorstep was alive or dead. Entire fortunes were lost at the gaming tables, ruining families, and leading the gentleman involved to “put a period to his existence.”

During the Regency card playing was a very popular pastime, not only for serious gamesters, but also for home entertainment and society parties. Every gentleman’s club had a card room; every ball and party, as well. At such high class places, players could depend upon an honest game, but there were also less reputable places to play. Gaming “hells” were places where the innocent might be easily fleeced and the “Captain Sharps” win huge fortunes.

Whist, the precursor of today’s Contract Bridge, was one of the period’s most popular card games. The game requires four players, playing in partners. A trump suit is chosen and tricks are won. In Whist, strategy improves the player’s ability to win, so a poor player is a great frustration to a more skilled partner.

Piquet is another popular Regency card game (My hero and heroine played a game of strip piquet in The Wagering Widow). It is played by two players and has a complicated scoring system and possibilities of huge bonus points. Skill, strategy, and memory for cards are all very important for success in Piquet.

Loo is another card game often mentioned in Regency romances. In its five card version, a permanent high trump is selected, called “Pam.” Like whist, the players play for tricks, but at the beginning of the hand, they may choose to play, fold, or pick up and play an extra hand dealt, called a “miss.” A player who wins no tricks is “looed.”

Vingt-et-un from the Regency period is essentially today’s game of Twenty-One. Each player tries to beat the dealer by earning twenty-one points or reaching a higher number of points without exceeding twenty-one.

Faro is not really a card game but a game of chance using cards. It is played at a green baize table displaying pictures of playing cards. The player bets on whether a certain card will be dealt from a special wooden box. In the late 1700s fashionable ladies set up Faro banks in their homes, but this practice fell out of favor by the Regency.

Hazard, another game often mentioned, is not a card game at all but a dice game. The player must roll a certain number on the dice. There is some strategy involved in which numbers the player selects to roll, but Hazard is essentially a game of chance.

Great fortunes were lost at the gaming tables during this time period. Beau Brummell is perhaps the most famous example of a man who plummeted from the heights of society to the depths of poverty. This arbiter of fashion died in squalor, exiled to France because of his gambling debts. The fact that he offended the Prince Regent by calling him fat did not help Brummell’s cause.

One of Lord Byron’s close friends also fell victim to a gambling addiction. Scrope Berdmore Davies was a dandy who lived a fast life and would have been almost entirely forgotten had not a trunk been discovered in 1976 at Barclays Bank, having been deposited by Scrope Davies for safe-keeping when he was forced to flee the country in 1816 because of gambling debts. Included in the contents of the trunk were Davies’ bills, including a summons listing a £7000 debt.

A gentleman’s gambling debts were “debts of honor” to be paid before debts to shopkeepers or tailors and such. Cheating at cards was a seriously dishonorable act. Gentlemen accused of cheating often challenged their accusers to duels to preserve their good names.

In his early career, the Duke of Wellington fell victim to the gambling fever and almost sold his commission to pay his gambling debts. He was rescued by Lord Camden who paid Wellington’s debts and arranged for the young Captain to further his military studies at Angers, where he could learn how the French waged war. Imagine how history might have changed in India, in Spain, at Waterloo, had not those debts been paid.

This piece should really have a 5 figure price tag !!!

Provenance: Bought from a reputable High-end Dealer in Ireland.