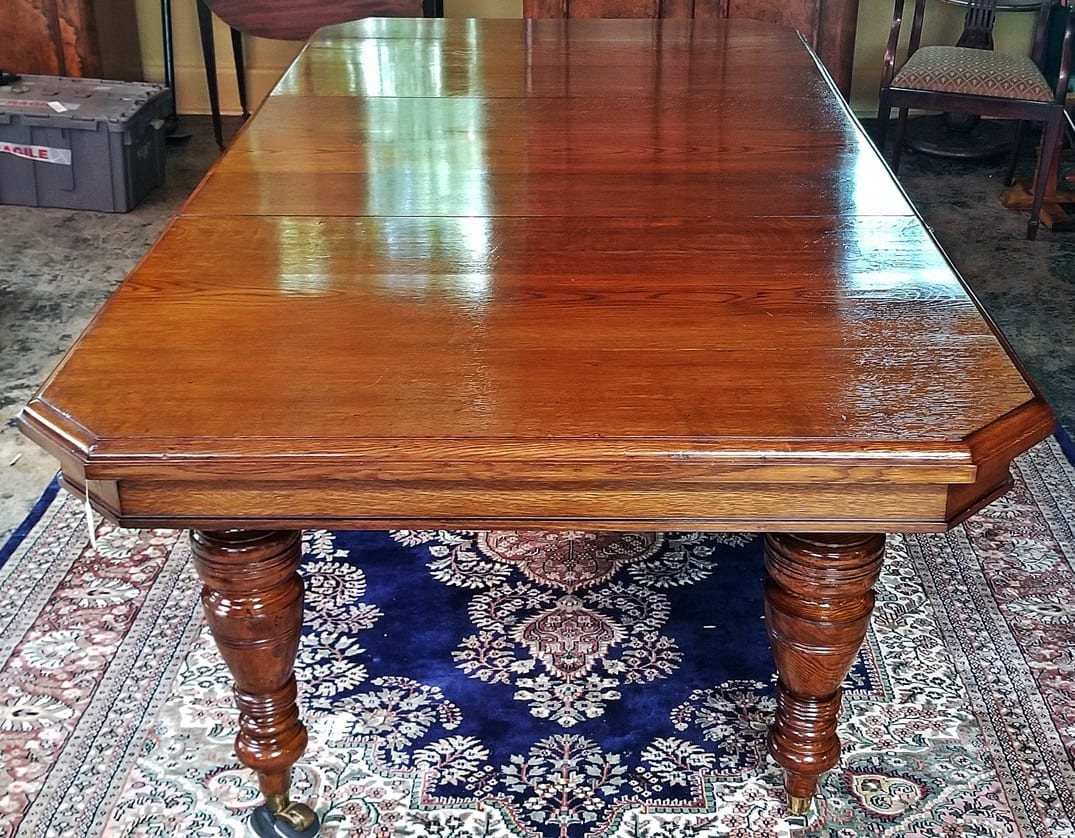 It is VERY RARE to find one of these made of solid oak………..most were made from mahogany.

This leads us to the conclusion that this was most likely made for an Irish ‘Country Squire’ rather than a ‘titled’ person. It’s size is more suitable to a medium sized formal dining room and not a large one like in Manor Houses. Oak was also more affordable than mahogany.

It has a beautiful octagonal shape.

The table has a telescopic mechanism to extend or shorten the table…..you turn the mechanism to remove one or add a leaf and tighten up the table to make it smaller.

The mechanism works like the winding of a clock !

This table has one re-movable leaf.

This table would grace the finest of Dining Rooms !!!

HISTORY OF DINING TABLES : A dining room is a room for consuming food. In modern times it is usually adjacent to the kitchen for convenience in serving, although in medieval times it was often on an entirely different floor level. Historically the dining room is furnished with a rather large dining table and a number of dining chairs; the most common shape is generally rectangular with two armed end chairs and an even number of un-armed side chairs along the long sides.

In the Middle Ages, upper class Britons and other European nobility in castles or large manor houses dined in the Great Hall. This was a large multi-function room capable of seating the bulk of the population of the house. The family would sit at the head table on a raised dais, with the rest of the population arrayed in order of diminishing rank away from them. Tables in the great hall would tend to be long trestle tables with benches. The sheer number of people in a Great Hall meant it would probably have had a busy, bustling atmosphere. Suggestions that it would also have been quite smelly and smoky are probably, by the standards of the time, unfounded. These rooms had large chimneys and high ceilings and there would have been a free flow of air through the numerous door and window openings.

It is true that the owners of such properties began to develop a taste for more intimate gatherings in smaller ‘parlers’ or ‘privee parlers’ off the main hall but this is thought to be due as much to political and social changes as to the greater comfort afforded by such rooms. In the first instance, the Black Death that ravaged Europe in the 14th Century caused a shortage of labour and this had led to a breakdown in the feudal system. Also the religious persecutions following the dissolution of the monasteries under Henry VIII made it unwise to talk freely in front of large numbers of people.

Over time, the nobility took more of their meals in the parlour, and the parlour became, functionally, a dining room (or was split into two separate rooms). It also migrated farther from the Great Hall, often accessed via grand ceremonial staircases from the dais in the Great Hall. Eventually dining in the Great Hall became something that was done primarily on special occasions.

Toward the beginning of the 18th Century, a pattern emerged where the ladies of the house would withdraw after dinner from the dining room to the drawing room. The gentlemen would remain in the dining room having drinks. The dining room tended to take on a more masculine tenor as a result.

A typical North American dining room will contain a table with chairs arranged along the sides and ends of the table, as well as other pieces of furniture, (often used for storing formal china), as space permits. Often tables in modern dining rooms will have a removable leaf to allow for the larger number of people present on those special occasions without taking up extra space when not in use. Although the “typical” family dining experience is at a wooden table or some sort of kitchen area, some choose to make their dining rooms more comfortable by using couches or comfortable chairs.

In modern American and Canadian homes, the dining room is typically adjacent to the living room, being increasingly used only for formal dining with guests or on special occasions. For informal daily meals, most medium size houses and larger will have a space adjacent to the kitchen where table and chairs can be placed, larger spaces are often known as a dinette while a smaller one is called a breakfast nook.[1] Smaller houses and condos may have a breakfast bar instead, often of a different height than the regular kitchen counter (either raised for stools or lowered for chairs). If a home lacks a dinette, breakfast nook, or breakfast bar, then the kitchen or family room will be used for day-to-day eating.

This was traditionally the case in Britain, where the dining room would for many families be used only on Sundays, other meals being eaten in the kitchen.

In Australia, the use of a dining room is still prevalent, yet not an essential part of modern home design. For most, it is considered a space to be used during formal occasions or celebrations. Smaller homes, akin to the USA and Canada, use a breakfast bar or table placed within the confines of a kitchen or living space for meals.

Provenance: Bought from a Estate/Manor House in Ireland.

Condition: Very good. One of two very minor cracks and missing the crank lever for extending.