A CLASSIC piece of Western Americana furniture from circa 1860-80.

These types of side tables turn up in the American Heartland and were pieces that were specifically made for ‘pioneers’ settling the ‘Western Frontiers’.

They were constructed so that they could be easily dismantled for transport and re-assembled upon settlement.

Made of beautifully patinated tiger oak, the table has a square table top comprising of 4 interlocking oak planks.

The legs are turned and form a twisted style (similar to barley twist). They slot into carved holes on the underside of the table top and are almost 45% in angle downwards. They are secured at the mid-lower section by a tiger oak carved shelf and they end in cast tin/iron feet which end in claw feet holding a rock crystal globe/ball.

BEAUTIFUL RUSTIC SIMPLICITY WITH a “TOUCH” of CHARACTER WITH THE FEET !

The Oregon Trail was a 2,170-mile (3,490 km)[1] east–west, large-wheeled wagon route and emigrant trail in the United States that connected the Missouri River to valleys in Oregon. The eastern part of the Oregon Trail spanned part of what is now the state of Kansas and nearly all of what are now the states of Nebraska and Wyoming. The western half of the trail spanned most of the current states of Idaho and Oregon.

The Oregon Trail was laid by fur traders and trappers from about 1811 to 1840 and was only passable on foot or on horseback. By 1836, when the first migrant wagon train was organized in Independence, Missouri, a wagon trail had been cleared to Fort Hall, Idaho. Wagon trails were cleared increasingly farther west and eventually reached all the way to the Willamette Valley in Oregon, at which point what came to be called the Oregon Trail was complete, even as almost annual improvements were made in the form of bridges, cutoffs, ferries, and roads, which made the trip faster and safer. From various starting points in Iowa, Missouri, or Nebraska Territory, the routes converged along the lower Platte River Valley near Fort Kearny, Nebraska Territory, and led to rich farmlands west of the Rocky Mountains.

From the early to mid-1830s (and particularly through the years 1846–1869) the Oregon Trail and its many offshoots were used by about 400,000 settlers, farmers, miners, ranchers, and business owners and their families. The eastern half of the trail was also used by travelers on the California Trail (from 1843), Mormon Trail (from 1847), and Bozeman Trail (from 1863) before turning off to their separate destinations. Use of the trail declined after the first transcontinental railroad was completed in 1869, making the trip west substantially faster, cheaper, and safer. Today, modern highways, such as Interstate 80 and Interstate 84, follow parts of the same course westward and pass through towns originally established to serve those using the Oregon Trail.

Provenance: From a Texas Estate.

Condition: Good condition. Top and shelf restored to original condition. Some cracks to the rock crystal feet but not noticeable. 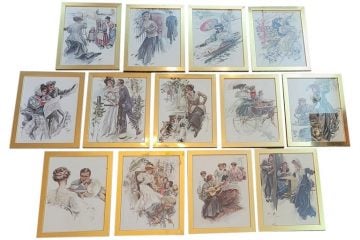