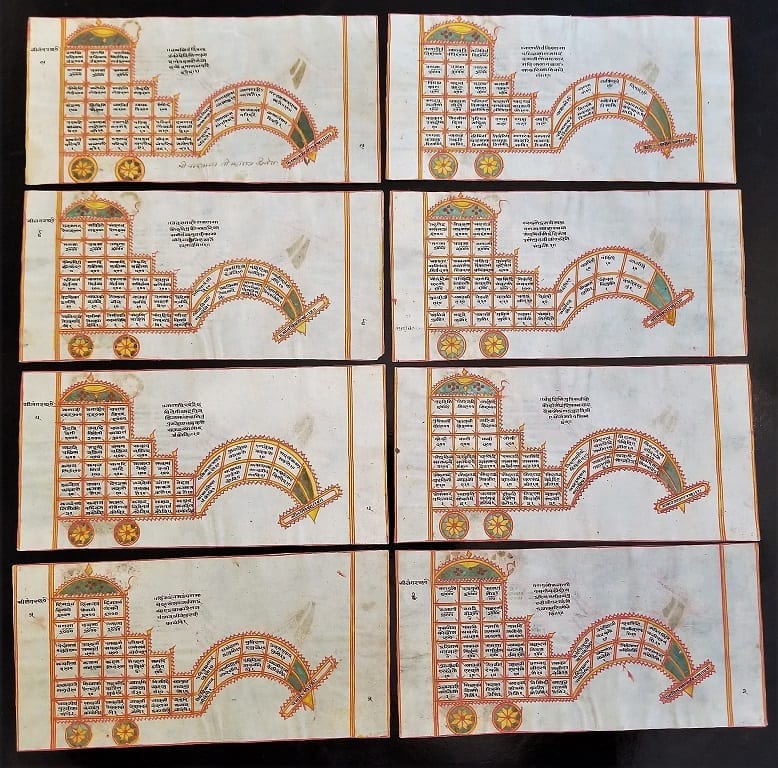 PRESENTING a STUNNING piece of Indian Antiquity from the 17th Century, namely, a 17C Set of 8 Paintings from a Yantra.

The Lot was described as: “Property of the Estate of Blanche Manso.

Eight paintings from a yantra.

Each side drawn with a chariot shape divided into blocks of text, numbered and labeled in the margins, decorated with bright pink, yellow and green on handmade paper.

Provenance: From the Collection of Blanche Manso”

The original Christie’s Lot No. Label is still attached, as is the catalog label on the back.

Yantra (यन्त्र) (Sanskrit) (literally “machine, contraption”[1]) is a mystical diagram, mainly from the Tantric traditions of the Indian religions. They are used for the worship of deities in temples or at home; as an aid in meditation; used for the benefits given by their supposed occult powers based on Hindu astrology and tantric texts. They are also used for adornment of temple floors, due mainly to their aesthetic and symmetric qualities. Specific yantras are traditionally associated with specific deities.

Representations of the yantra in India have been considered to date back to 11,000-10,000 years BP.[1] The Baghor stone, found in an upper-paleolithic context in the Son River valley, is considered the earliest example[2] by G.R. Sharma, who was involved in the excavation of the stone (it was dated to 25,000 – 20,000 B.P.). The triangular-shaped stone, which includes triangular engravings on one side, was found daubed in ochre, in what was considered a site related to worship. Worship of goddesses in that region was found to be practiced in a similar manner to the present day.[3] Kenoyer, who was also involved in the excavation, considered it to be associated with Shakti.[4]

In Rigvedic Sanskrit, it meant an instrument for restraining or fastening, a prop, support or barrier, etymologically from the root yam “to sustain, support” and the -tra suffix expressing instruments. The literal meaning is still evident in the medical terminology of Sushruta, where the term refers to blunt surgical instruments such as tweezers or a vice. The meaning of “mystical or occult diagram” arises in the medieval period (Kathasaritsagara, Pancharatra).

17C Set of 8 Paintings from a Yantra.