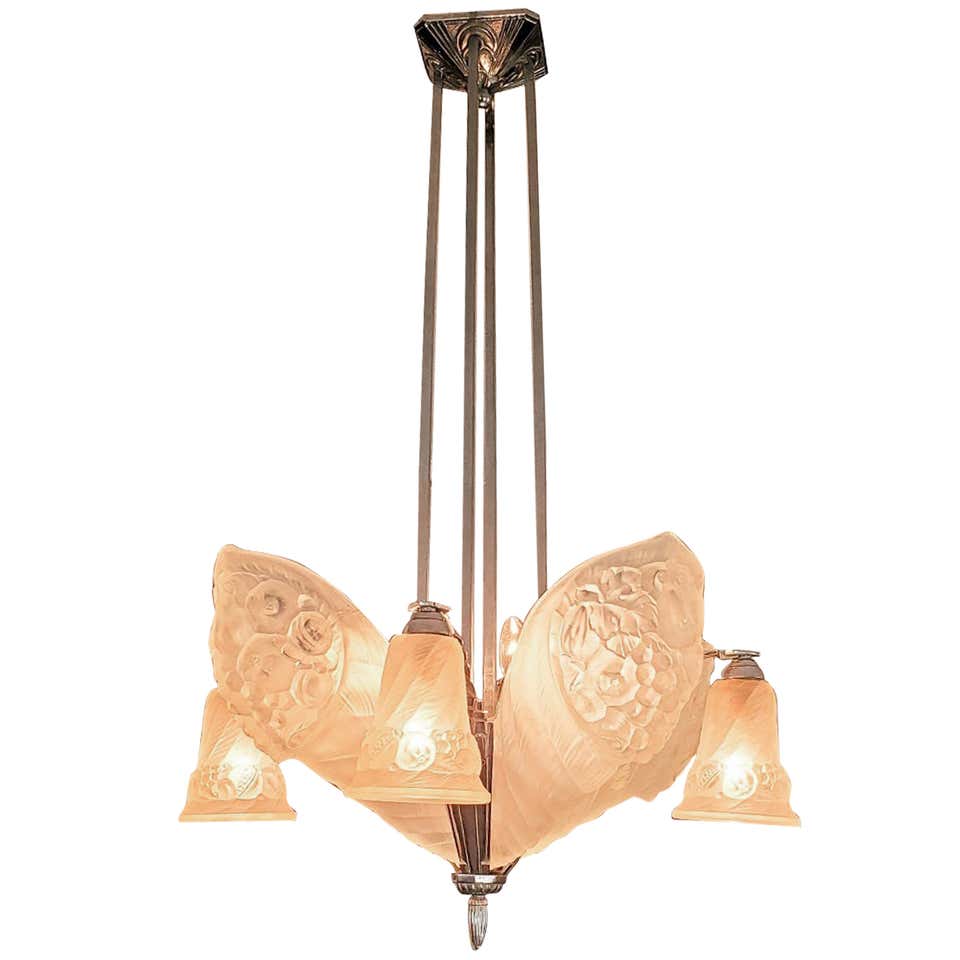 Fully Signed … ” Schneider France II06″ … on each of the larger bowls.

Made circa 1925, this pendant chandelier is of STUNNING QUALITY !

It ends in a pointed acorn finial.

The drop down shades have fruit decorations, as do the large upturned bowls …. but when illuminated and viewed straight on you notice a nice ‘twist’ ……… The fruit are shaped to resemble ‘Monkey faces’ in a FANTASTIC optical Illusion !

“Charles Schneider was born in Chateau-Thierry, near Paris, on 23rd February 1881. At an early age he moved with his family to Nancy, the artistic center of France. His brother, Ernest Schneider (1877-1937), started working for Daum in 1903 as clerk. Charles had started an artistic career and was already active at Daum since 1898. He performed his practical training in the engraving and decorating workshop, but he also took drawing and modelling lessons with Henri Berge. Concurrently, he studied the Ecole des Beaux-Arts in Nancy. In 1904, he went to the Ecole Nationale des Beaux-Arts in Paris and studied painting and medal engraving. During this period, he made bronze art objects in the pure Art Nouveau style, all signed “CH. SCHNEIDER Nancy”. From 1906, he regularly exhibited in the Engraving section of the Salon de la Societe des Artistes Francais and he was twice awarded a prize. In 1913, the brothers decided to start their own business and bought a small glass factory, specialising in electric light bulbs, in association with a friend Henri Wolf, at Epinay-sur-Seine. This factory was known as ‘Schneider Freres & Wolf’. The new glassworks production started with, among others, a group of about twenty workers enticed away from the Daum manufacture. At the outbreak of the World War I, the firm’s activity had to be stopped and the glassworks closed by the end of 1914.

Ernest and Charles were demobbed in 1917 and the factory re-opened under the name “Societe Anonyme des Verreries Schneider”. At this time, public taste still favoured the Art Nouveau style, and the factory produced mainly ‘cameo’ glass with floral and animal designs, and vases with applied handles and bubbles. Apart from the introduction of art glass, half of the production was of commercial drinking glasses. In 1918, fire destroyed the studios at Galle and a group of artists went to Schneider’s to continue their production for Galle. This period was of great importance to Charles Schneider because he acquired the technique of ‘marqueterie de verre’ from Galle’s artists. This technique, similar to marquetry in wood, is where the design is carved out of a vase and filled with colored glass.

The big black-footed bowls are one of the first types of art glass made by the Schneider factory. These designs give only a partial idea , however, of the variety of bowls of this type that were produced for at least he next six years. During the first period, they had a satinic finish (1918-1921). Later, they were polished to a smooth, brilliant surface.

In this period, Schneider started producing top-of-line pieces with intercalary motifs or with applied patterns requiring a thorough mastery of the execution technique on the part of the glassmaker. Mention should be made of the pieces with wheel-carved patterns, such as the “Raisins noirs” series, and the “Pavots” or “Camelias” medallion series.

Some of the factory’s most interesting models during the early period were designed by Gaston Hoffman between 1918 and 1921. His pieces are not signed with his name, since he was a salaried employee of the firm. Most of his models are in the top rank of the factory’s production.

By 1920, the factory was working at full capacity making mainly art glass. In 1921, Schneider started new trade marks for his cameo glass, signing it ‘Le Verre Français’ or ‘Charder’. Sometimes a vase or lamp would bear both signatures. The idea was to popularise art glass and make it more accessible to the public.

Le Verre Français was mainly sold at department stores like Galeries Lafayette, Le Printemps and Le Bon Marche. Pieces signed ‘Schneider’ were sold by specialised art shops such as Delvaux, Rouard, La Vase Etrusque and Le Grand Depot. Le Verre Français was made exclusively using the technique of acid etching, which gave good quality at a low price. The technique of wheel engraving through different layers of glass was used only for special pieces.

After the 1925 exhibition, various new designs were created and the factory expanded to employ about 500 workers. Blank glass was also supplied to art shops (Delvaux etc.) to be decorated (enamelled, painted etc.) by their own artists, and commissions were received from perfumery companieslike Coty. At this time, the company was at its peak due to the good designs of the previous years, such as the new style created in 1920 using new shapes and contrasting colors by applying black foot and handles to brightly coloured vases and coupes, thus giving them a dramatic effect.

Always innovative, Schneider created a new technique of ‘colored powders’ whereby the pulverised glass was mixed with metal oxides to obtain different colours and then spread on a flat surface. Most of Schneider’s art vases and lamps were exported to America.  After the Wall Street crash of 1929 demand dwindled and the factory started to decline. During the 1930’s production of art glass was down to a few pieces a day as they concentrated on making simple designs with less colours for the local market.
Attempts were made to save the firm. But Ernest had been seriously ill since the end of the 1920’s and was of no help. He died in June 1937, one month after the liquidation of the “Verreries Schneider”. In 1940, during the war, the factory was requisitioned by the German troops and used as a restaurant.”
In 1950, Charles Schneider and his son founded a new glassworks at Epinay-sur-Seine, named “Cristalleries Schneider”, which was later transferred to Lloris after an accident caused by a gas explosion. Like the old Schneider factory, this one specialized in free-blown glass. Following the artistic trend of the 1950’s, the glassworks produced glass sculptures, crystal vases (sometimes bubbled and colored), ashtrays, clock frames, candlesticks and fruit bowls. But this time, the glass was lead crystal, which had come back into favor in France during the 1930’s after being revived in Scandinavia. It was no longer cut, but worked almost exclusively by free-blowing and drawing. All the productions were signed “Schneider France”. Charles Schneider’s died in 1952 and the factory was closed in 1981. ”

Provenance: From the Private Collection of a former Dallas Dealer of note and repute.

Condition: Near Mint. One small hairline crack on one of the large bowls, but not significant or visible.