PRESENTING A LOVELY Vintage Gold and Brass 4 light Lantern from circa 1955.

4 bulb Lantern in full functional condition and sympathetically restored to its original beauty.

The Lantern is gilt metal and brass and is covered in gold leaf. It has been recently re-gilted.

The top finial of the lantern is beautifully cast with scrolling arms  and  handles.

There are 5 glass panels edged in brass.

The interior working bulb platform is on a tilt central column or lever that tilts with the movement of the lantern in the wind.

Both the top and bottom parts of the lantern have a pierced gallery and the base has a removeable plate with a final to access the bulbs on the interior.

The interior has a label hidden from view under the bulb base (see photos) confirming that the Lantern was made by Moe Light of Fort Atkinson Wisconsin a Division of Thomas Industries.

This helps us date the piece as Moe Lighting was acquired by Thomas Industries in 1953.

We are of the opinion that this piece date from the mid 1950’s. 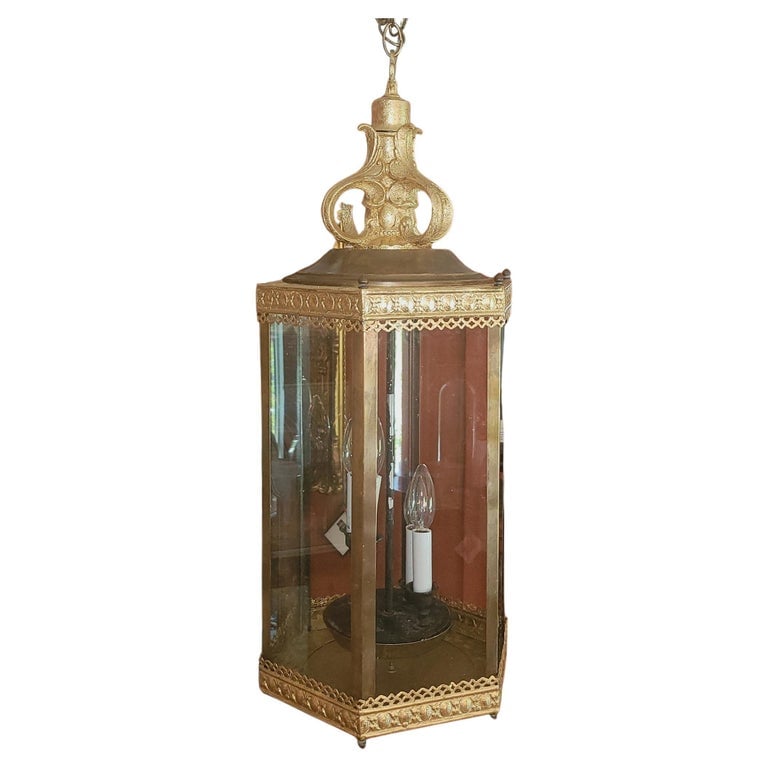 A BEAUTIFUL ADDITION TO ANY HOME OF STYLE !!

HISTORY:
Thomas Industries Inc. manufactures compressors and vacuum pumps for Original Equipment Manufacturers (OEM) applications. The largest OEM markets for the company’s compressors and pumps are in the medical, information technology, automotive, and environmental industries. Until the late 1990s, Thomas was also known as a leading producer of consumer, commercial, and industrial lighting fixtures. In 1998, through a joint venture with competitor The Glenlyte Group Incorporated, its lighting business was spun off into a new company–Glenlyte Thomas Group LLC–which subsequently became the third largest lighting fixture manufacturer in North America, with an estimated 13 percent domestic market share. Headquartered in Louisville, Kentucky, Thomas Industries has more than 25 manufacturing and distribution facilities located in the United States, Europe, and Asia.

Thomas Industries was formed in a 1953 merger of two companies–a lighting fixture manufacturer and the maker of electrical spraying machines–both of which came into being in the late 1920s. The unlikely marriage of these two product lines was the cornerstone of what would become the company’s two core businesses: lighting fixtures and air compressors/pumps.

The lighting fixture side of Thomas Industries traces its history back to Milwaukee, Wisconsin, and two brothers: Henrik and Ole Moe. The Moe Brothers, together with a number of other entrepreneurs, owned the Moe-Bridges Co., a lighting fixture manufacturer formed in 1919. As a result of friction among the Moe-Bridges management, however, the Moe brothers were frozen out of the company in the late 1920s by the majority owners. Deciding to stay with the industry they knew, the Moes formed another lighting fixture company called Moe Brothers Manufacturing. Henrik’s two sons joined the business in the early 1930s, and in 1938, the company moved its operations from Milwaukee to Fort Atkinson, Wisconsin.

During World War II, both companies stopped making their standard product lines in order to produce materials for the war effort. At the close of the war, in 1946, Moe Brothers received a large contract from Sears to produce household pressure cookers. Although the company had not previously manufactured pressure cookers, the large stamping presses they had obtained for the war gave them the production capabilities for the job. The brothers planned to use sales revenues from the pressure cooker contract to return to the lighting fixture business. Unfortunately, Sears rescinded the company’s contract due to a product malfunction. In the aftermath of the contract loss, pressured by the bank to repay existing debt, the Moe brothers decided to sell the company.

Moe Brothers was purchased in 1948 by a Louisville investment group headed by Lee Thomas. Thomas, the former president of Ekco Products in Chicago, had recently purchased a small saw business in Louisville and was looking for further investment opportunities. His new purchase was renamed Moe Light, and a national advertising campaign was launched to promote residential lighting fixtures. Two years later, Moe Light expanded by opening a new residential lighting factory in Kentucky and acquiring the Los Angeles-based Star Lighting Fixture Company.

The remainder of the 1950s were characterized by growth in the form of more acquisitions. The year 1957 saw the addition of the Radiant Glass Company of Fort Smith, Arkansas, a producer of street lighting globes and opalware glass for lighting fixtures. The Radiant Glass Company took over production of the blown glass components for Thomas’s lighting fixtures, which had previously been purchased from outside providers. A 1958 acquisition added the Benjamin Electric Manufacturing Company to the Thomas Industries stable. Located in Des Plaines, Illinois, Benjamin Electric was a manufacturer of commercial lighting fixtures. The final acquisition of the decade came in 1959, when the company purchased C&M Products Co., Ltd., of Toronto. Thomas proceeded to use the new foothold to introduce its U.S. products into the growing Canadian market.

In 1961, Lee Thomas stepped down from his position as president of Thomas Industries and was elected to serve as chairman of the board of directors, as well as CEO. Thomas was replaced by the company’s former executive vice-president, John Beam. Although this change in leadership was significant, it was perhaps less significant than another change that occurred that same year–a change in the design of the compressor units used in the Sprayit products. In 1961, these units were reconfigured to accommodate other continuous-air source applications. This redesign was the inception of the modern-day Thomas Industries’ OEM product line.

Thomas Industries expanded yet again in 1962 and 1963. In 1962, the company acquired the Thomas Products Company of Johnson City, Tennessee, a manufacturer of paint rollers, roller pans, and roller covers. Thomas management felt that the line of paint-related products would complement the Sprayit line of paint sprayers and compressors. In 1963, the company opened a new 250,000-square foot lighting fixture plant in Sparta, Tennessee, to replace the Benjamin Electric facility in Illinois, which was then closed. An existing 50,000-square foot Star Lighting plant in Los Angeles was also replaced by a new facility more than twice the size of the original.

By 1963, Thomas Industries was sprawling, both in terms of product lines and geographic distribution. To better order and manage the business, the company was split into five operating divisions. Its Residential Lighting Division, which consisted of the former Moe Lighting and Star Lighting lines, included dimmers, recessed, hand-blown glass, and illuminated signs. The company’s Commercial and Industrial Lighting Division consisted of Benjamin Electric products, such as air-handling fixtures, dimming systems, electronic signaling devices, and contract metalworking and porcelainizing. The Special Products Division included what would become the company’s OEM lines–Sprayit paint sprayers, compressors, and pumps&mdash well as the Wright power blade and chain saws and Thomas paint rollers, covers, and pans. The final two divisions were more geographic in nature. The Pacific Division handled residential, commercial, and industrial lighting fixtures in the nine western states, Hawaii, and Alaska; and C&M Products oversaw the Canadian market.

The company moved into new territory in the lighting field in 1967, when it acquired Sandel Manufacturing, of Chicago, a producer of portable lamps, and the Phil-Mar Corporation, of Cleveland, a producer of ceramic lamps. This same year, Thomas opened a new residential lighting plant in Beaver Dam, Kentucky, and sold off the Wright Saw operation. The Wright plant was used to accommodate expansion of the Sprayit line of paint spraying equipment. In the fall of 1967, the expanding Thomas Industries’ stock was listed on the New York Stock Exchange.

The pattern of expansion and diversification continued through the remainder of the 1960s and into the early 1970s. A 1968 purchase added a Princeton, Indiana, paintbrush plant, whose operations were absorbed by Thomas’s paint roller operation in Johnson City, Tennessee. An acquisition in the following year brought Jet Line Products, of Matthews, North Carolina, into the fold. Jet Line’s product line included electrical conduit fishing equipment and built-in vacuum cleaning systems. In 1971, the company diversified further by acquiring Harris & Mallow Products, Inc., a maker of decorative wall clocks and weather instruments.

Thomas Industries had expanded well beyond the two-facility operation it began as 18 years earlier. By the end of 1971, the company had more than 2,308,300 square feet of production space in 13 plants. The company employed more than 3,700 persons and had sales of $82 million. The 1970s were to be characterized by a similarly rapid growth rate for Thomas.

Provenance: From an Antique Dealers House in Greenville, TX

Condition: Recently restored. Has chain and can be set to required length by buyer. No canopy. 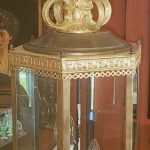 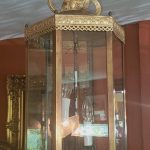 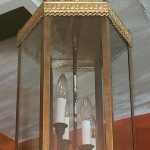 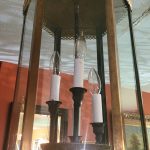 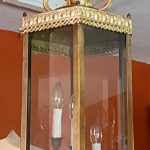 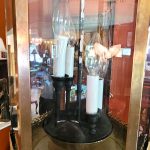 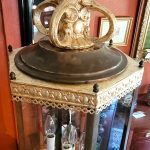 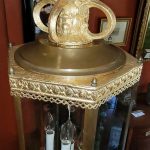 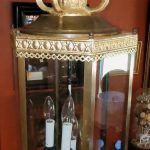 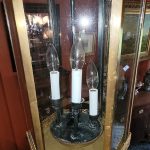 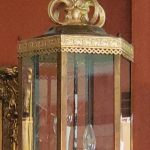 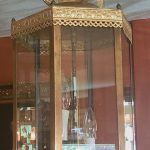 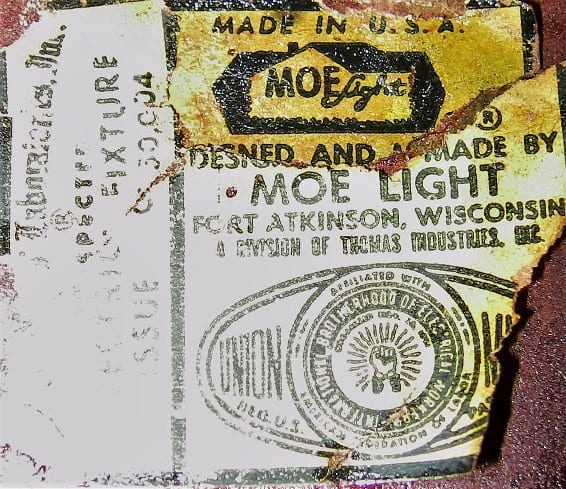 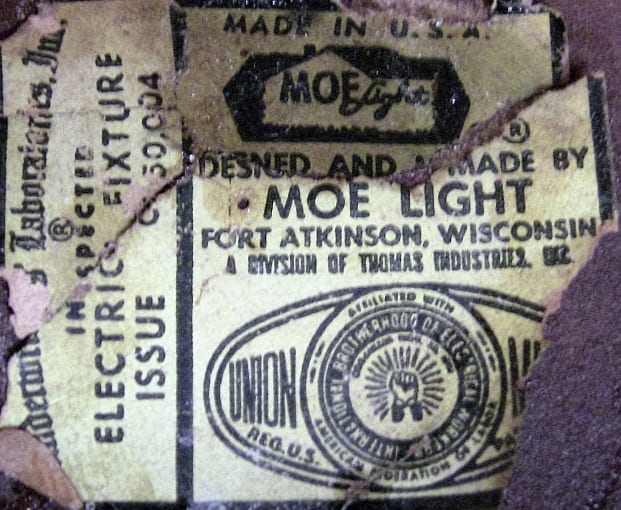 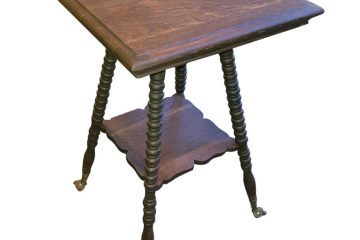 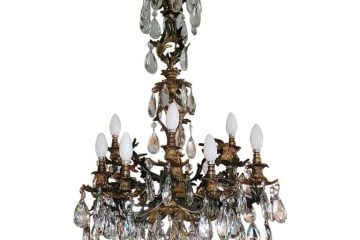