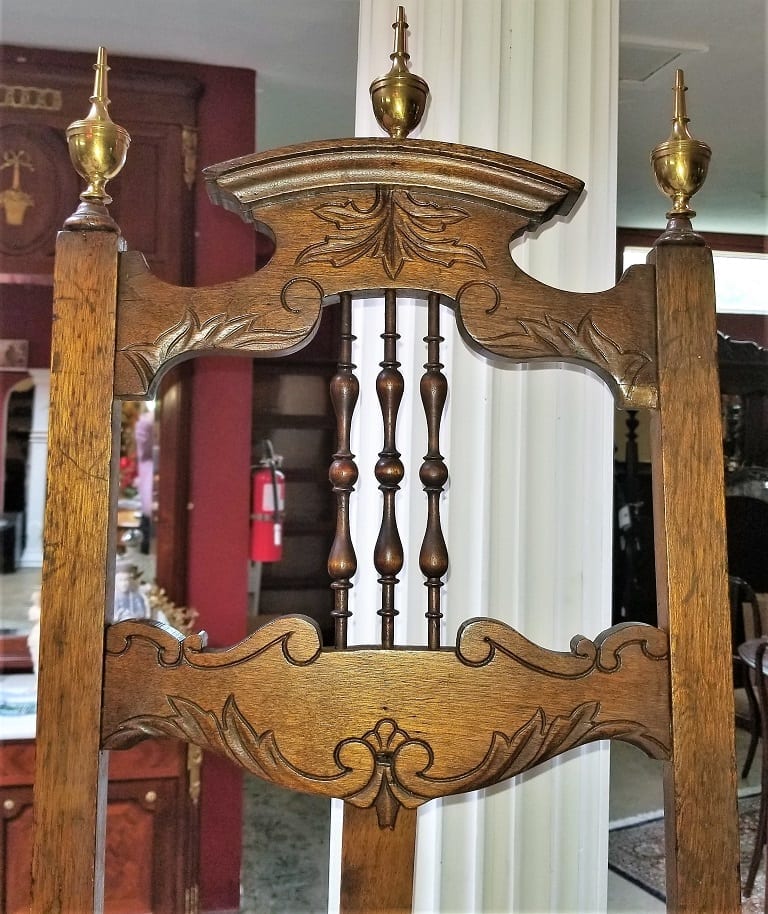 This is a large easel for the display of large paintings or portraits. It stands 80 inches tall and the painting shown on display in the photos is 45″ x 32″.

The top of the easel has 3 large brass finials atop a carved pelmet in floral decoration. Underneath, it has 3 turned and fluted center pins connecting to another floral carved base.

The easel then extends downwards towards 2 triangular shaped supports for displaying the painting and another floral carved cross support with 2 central pins each ending in a ball and connecting to the base florally carved support.

It ends with 2 out-turned cabriole legs and is supported from behind by a hinged back leg.

“With a name like ”Eastlake”, you’ve probably guessed that this style is named after either a person or a place. Go ahead and make a guess – you’ve got a 50/50 shot. It’s a person. Pat yourself on the back if you got that right.

Charles Eastlake (1836-1906) was an English architect and designer of the Victorian era. In 1868, he published a book on home furnishing called Hints on Household Taste in Furniture, Upholstery, and Other Details. The book was tremendously popular in England and made its way to the USA around 1872, where it became tremendously popular there as well.

In his book, Eastlake presented a vision for home furnishings that rejected the strong curves and high relief carvings of Victorian furniture, particularly those attached to the French Baroque Revival and Second Empire styles. Instead, Eastlake presented furniture that was angular, rectilinear, and reduced to simpler geometric shapes. At the same time, he did not disavow ornamentation completely as in some country and mission styles, but reduced it to low reliefs that created less dramatic shadows. Most of the decorative elements in Eastlake’s style were through geometrically shaped brackets, spindles, trestles, and other elements.

Charles Eastlake’s ideas were closely connected to the Arts and Crafts movement of the time, which rejected the increasingly mechanized process of architecture and design in favor of handmade and artisanal products. Eastlake himself saw his style as being one of sturdy and simple craftsmanship. He personally hated machine-made furniture, but he was not a furniture maker himself. He was an architect, so Charles Eastlake never made any Eastlake furniture.

That task fell to professional cabinetmakers (a catchall term for expert furniture makers), who turned the designs in his book into actual products. Unfortunately for Charles Eastlake, they didn’t share his distaste for machine-made furniture. In fact, those geometric brackets, spindles, and other components could be easily made on new turning machines, scroll saws, and other marvels of the industrial age.”

Condition: Very good. The back support leg and hinge would appear to be a more recent addition to the piece, but do not detract from it one bit.