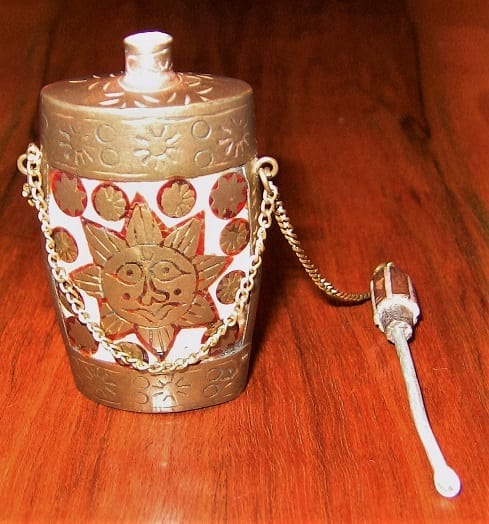 The front and rear have a central carved brass star depicting the Sun.

The Sun star is surrounded by more stars and polka dots embedded in white yak bone. Each inlaid star or circle is edged with red enamel.

The lid is original and is held in place by a fine brass chain. It lifts off, to reveal a pewter snuff spoon. TIBET: “Qing conquest and administrative rule (1720–1912)
Main articles: Chinese expedition to Tibet (1720) and Tibet under Qing rule
Tibet within the Qing dynasty in 1820.

During this era, the region was dominated by the Dalai Lamas with the support from the Qing dynasty established by the Manchus in China. The Qing rule over Tibet was established after a Qing expedition force defeated the Dzungars who occupied Tibet in 1720, and lasted until the fall of the Qing dynasty in 1912. The Qing emperors appointed imperial residents known as the Ambans to Tibet, who commanded over 2,000 troops stationed in Lhasa and reported to the Lifan Yuan, a Qing government agency that oversaw the region during this period.[49]

The Kangxi Emperor of the Qing dynasty sent an expedition army to Tibet in response to the occupation of Tibet by the forces of the Dzungar Khanate, together with Tibetan forces under Polhanas (also spelled Polhaney) of Tsang and Kangchennas (also spelled Gangchenney), the governor of Western Tibet,[50][51] They expelled the Dzungars from Tibet in 1720. They brought Kelzang Gyatso with them from Kumbum to Lhasa and he was installed as the seventh Dalai Lama.[52][53] Qing protectorate over Tibet was established at this time, with a garrison at Lhasa, and Kham was annexed to Sichuan.[54] In 1721, the Qing established a government in Lhasa consisting of a council (the Kashag) of three Tibetan ministers, headed by Kangchennas. The Dalai Lama’s role at this time was purely symbolic, but still highly influential because of the Mongols’ religious beliefs.[55]

After the succession of the Yongzheng Emperor in 1722, a series of reductions of Qing forces in Tibet occurred. However, Lhasa nobility who had been allied with the Dzungars killed Kangchennas and took control of Lhasa in 1727, and Polhanas fled to his native Ngari. Qing troops arrived in Lhasa in September, and punished the anti-Qing faction by executing entire families, including women and children. The Dalai Lama was sent to Lithang Monastery[56] in Kham. The Panchen Lama was brought to Lhasa and was given temporal authority over Tsang and Ngari, creating a territorial division between the two high lamas that was to be a long lasting feature of Chinese policy toward Tibet. Two ambans were established in Lhasa, with increased numbers of Qing troops. Over the 1730s, Qing troops were again reduced, and Polhanas gained more power and authority. The Dalai Lama returned to Lhasa in 1735, temporal power remained with Polhanas. The Qing found Polhanas to be a loyal agent and an effective ruler over a stable Tibet, so he remained dominant until his death in 1747.[57]

The Qing had made the region of Amdo and Kham into the province of Qinghai in 1724,[54] and incorporated eastern Kham into neighbouring Chinese provinces in 1728.[64] The Qing government sent a resident commissioner (amban) to Lhasa. Polhanas’ son Gyurme Namgyal took over upon his father’s death in 1747. The ambans became convinced that he was going to lead a rebellion, so they killed him. News of the incident leaked out and a riot broke out in the city, the mob avenged the regent’s death by killing the ambans. The Dalai Lama stepped in and restored order in Lhasa. The Qianlong Emperor (Yongzheng’s successor) sent Qing forces to execute Gyurme Namgyal’s family and seven members of the group that killed the ambans. The Emperor re-organized the Tibetan government (Kashag) again, nominally restoring temporal power to the Dalai Lama, but in fact consolidating power in the hands of the (new) ambans.[65]

The defeat of the 1791 Nepalese invasion increased the Qing’s control over Tibet. From that moment, all important matters were to be submitted to the ambans.[66] It strengthened the powers of the ambans. The ambans were elevated above the Kashag and the regents in responsibility for Tibetan political affairs. The Dalai and Panchen Lamas were no longer allowed to petition the Qing Emperor directly but could only do so through the ambans. The ambans took control of Tibetan frontier defense and foreign affairs. The ambans were put in command of the Qing garrison and the Tibetan army (whose strength was set at 3000 men). Trade was also restricted and travel could be undertaken only with documents issued by the ambans. The ambans were to review all judicial decisions. However, according to Warren Smith, these directives were either never fully implemented, or quickly discarded, as the Qing were more interested in a symbolic gesture of authority than actual sovereignty.[67] In 1841, the Hindu Dogra dynasty attempted to establish their authority on Ü-Tsang but where defeated in the Sino-Sikh War (1841–1842).

In the mid 19th century, arriving with an Amban, a community of Chinese troops from Sichuan who married Tibetan women settled down in the Lubu neighborhood of Lhasa, where their descendants established a community and assimilated into Tibetan culture.[68] Hebalin was the location of where Chinese Muslim troops and their offspring lived, while Lubu was the place where Han Chinese troops and their offspring lived”