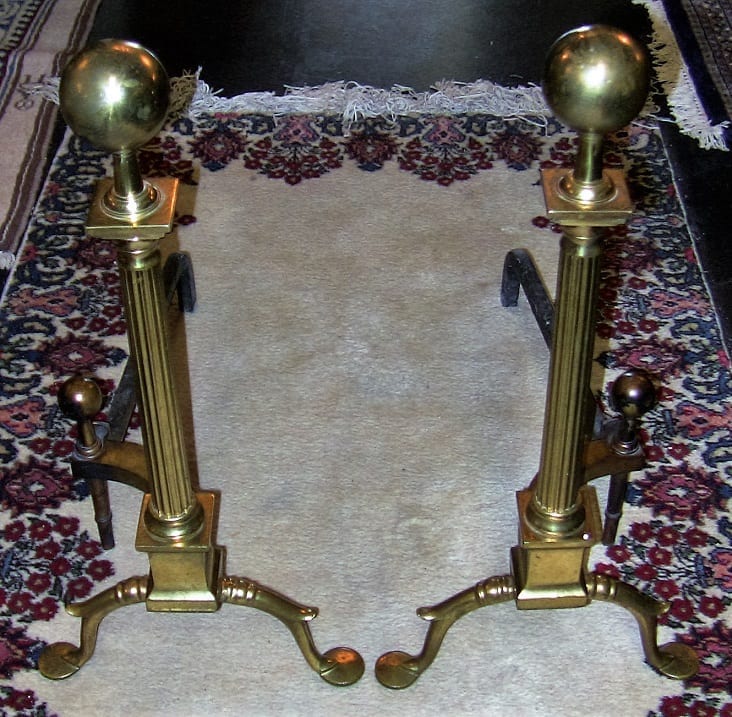 Made of solid brass, the Andirons each sit on 2 bun feet with curved, flowing legs edged or topped with a curved shell.

The Central Column is in the form and design of a Roman Column which sits on a square plinth and finishes with a squared plinth at the top. The squared plinth is then topped with a large Ball Finial.

The back of the andirons consists of a curved brass bar ending with a smaller ball finial and turned leg….again in solid brass.

Extending backwards the Andirons have a curved cast iron stand that would extend into the fireplace.

An andiron (older form anderne; med. Lat. andena, anderia) is a horizontal iron bar upon which logs are laid for burning in an open fireplace. They are usually used in pairs to build up a firedog in American English, sometimes called a dog or dog-iron, intended to hold logs above the hearth in order to improve air circulation for better burning. In older eras (e.g. 16th to 18th century AD) andirons were used as a rest for a roasting spit; and sometimes included a cup-shaped top to hold porridge. The earliest andirons were forged from wrought iron.

Andirons and fire dogs are devices made of metal or ceramic which support the firewood so that a draft of air may pass around it, allowing proper burning and thus reducing smoke. They normally stand upon short legs and are usually connected with an upright guard. The guard keeps the logs in the fireplace as they burn and settle. This guard, which may be of iron, steel, copper, bronze, or even silver, may be simple, or elaborately ornamented (often with patterns or heraldic ornaments, such as the fleur-de-lis, with sphinxes, grotesque animals, mythological statuettes, or caryatides supporting heroic figures or emblems). A common decoration in the form of a canine plays on the dual meanings of the word dog (canine and inanimate holder or blocker).

Andirons, or fire dogs, had been in use by the Ancient Greeks, and were called krateutai (Greek: κρατευταί[2]). Excavations made on the Greek island of Santorini, unearthed stone sets of firedogs used before the 17th century BC. In each pair of the supports, the receptacles to hold skewers or spits were found in equivalence, while the line of small openings in the base formed a mechanism to supply the coals with oxygen so that they remained alight during its use.[3]

Fire dogs were also referred to as moon idols (or moon horns)[4] in antiquity. They may also refer to an artifact-type of late Bronze Age Europe (ca. 1300 to 800 BC). Typically made of clay, they have been found in areas of modern France, Switzerland and Germany; often associated with the Urnfield culture. This naming suggests that moon idols could have been used as andirons to build up fire dogs.

In some cases, moon idols are a cult item of Early European Religions, resembling a pair of horns or crescent moons on a pedestal, and were variously interpreted as testifying to Bull worship, Moon worship, or as a holder for wooden logs to be used in a fire altar.

Previous to the Italian Renaissance, andirons were almost invariably made entirely of iron and were of comparatively plain design, but when the ordinary objects of the household became the care of the artist, the metalworker lavished skill and taste upon them. Men such as Jean Berain, whose artistry was most especially applied to the ornamentation of Boulle furniture, sometimes designed them. The andiron reached its greatest artistic development under Louis XIV of France, and the first extant examples—often made of cast iron—are to be found in French museums and royal palaces. Firedogs, with little or no ornamentation and made of metal or ceramics, were used in kitchens, with ratcheted uprights for the spits. Very often these uprights branched out into arms, or hobs, for stewing or keeping food hot.

Federal-style architecture is the name for the classicizing architecture built in the newly founded United States between c. 1780 and 1830, and particularly from 1785 to 1815. This style shares its name with its era, the Federal Period. The name Federal style is also used in association with furniture design in the United States of the same time period. The style broadly corresponds to the classicism of Biedermeier style in the German-speaking lands, Regency architecture in Britain and to the French Empire style.

In the early American republic, the founding generation consciously chose to associate the nation with the ancient democracies of Greece and the republican values of Rome. Grecian aspirations informed the Greek Revival, lasting into the 1850s. Using Roman architectural vocabulary,[1] the Federal style applied to the balanced and symmetrical version of Georgian architecture that had been practiced in the American colonies‘ new motifs of neoclassical architecture as it was epitomized in Britain by Robert Adam, who published his designs in 1792.

American Federal architecture typically uses plain surfaces with attenuated detail, usually isolated in panels, tablets, and friezes. It also had a flatter, smoother façade and rarely used pilasters. It was most influenced by the interpretation of ancient Roman architecture, fashionable after the unearthing of Pompeii and Herculaneum. The bald eagle was a common symbol used in this style, with the ellipse a frequent architectural motif.

The classicizing manner of constructions and town planning undertaken by the federal government was expressed in federal projects of lighthouses and harbor buildings; hospitals; in the rationalizing, urbanistic layout of L’Enfant’s city of Washington; and in New York the Commissioners’ Plan of 1811.[2]

In two generations during which a gentleman’s education included the ability to draw up an idiomatic classical elevation[3] for craftsmen who were themselves trained in the classical vocabulary, and where masons and house carpenters on their own produced a refined vernacular architecture, this American neoclassical high style was the idiom of America‘s first professional architects, in the generation of c. 1800, men such as Charles Bulfinch, architect of the Massachusetts State House, Boston, and Minard Lafever.

The two brothers, Robert Adam and James Adam, were Scottish architects who never visited America, but through their books were leading influences.

These pieces have GLORIOUS NATURAL PATINA and AGING.

They would have graced a very fine home in the North East of the US in the Early 19th Century.

Provenance: From the Private Collection of a High-End Collector amassed over 30 years