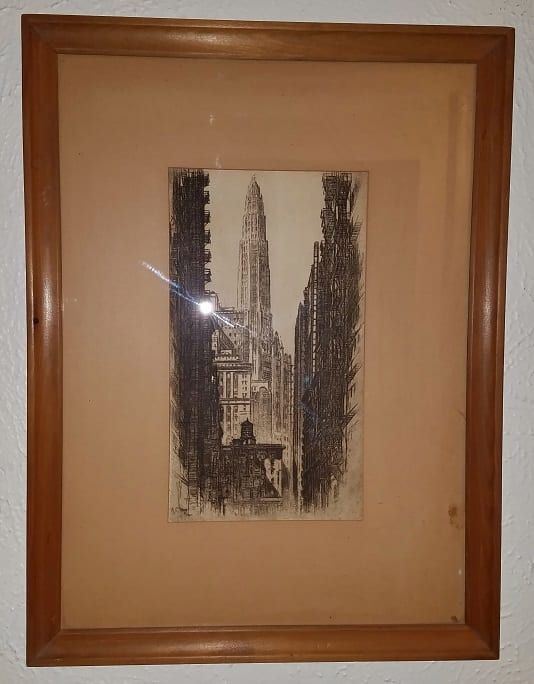 PRESENTING a  VERY RARE ORIGINAL etching by Alonzo C. Webb of the City of Chicago with a view of Downtown from circa 1930.

This etching is in SUPERB ORIGINAL CONDITION.

It is an original etching and not a print. There is no plate mark or number and it has been signed in the lower left hand corner by A.C. Webb, Paris….one signature on the etching.

The etching is on ‘Normandy Vellum’ from France and marked/stamped for ‘J.L. Hempstead Studios, Etchings, 10 East Ohio Street, Chicago’.

We can only find numbered plated prints of this print online…..being an original means it is EXTREMELY RARE. Webb was born in Nashville, Tennessee, United States, the son of Alonzo C. Webb, Sr. and Ellen Hanor. His father was supervisor of writing and drawing for the public schools in Nashville.

From 1907 to 1909, he attended the Art Institute of Chicago.[1] In 1911, he enrolled at The Stout Institute in Wisconsin, where he studied building trades in preparation for a course in architecture. From 1912-1913 he studied architecture at the University of Illinois. During 1914 and 1915 he practised in Chicago, winning several medals for architectural designs. He later attended the Art Students League of New York and worked with Dan Barber, a New York architect.

During the First World War he served with the American Engineering Forces in France, first as a sergeant and then as a commissioned second Lieutenant. After the armistice in 1918 he remained in Europe, and from March to June 1919 attended the art school opened for American soldiers at the A.E.F. Art Training Center in Bellevue, France. In September 1919 he was demobilized from the army and study design in Italy and illustration in Spain and the United Kingdom. After which, he spent the next six months traveling in Europe and seeing as much art as possible until his money was exhausted.

Determined to stay in France, he began looking for a way to make a living in Paris. Unable to work as an architect, he began making signs in English for the millinery shops along the Rue de Rivoli, which led in time to advertisements and designs[2] for some of the fashionable houses along the rue de la Paix and the Place Vendôme. This led to work with a firm manufacturing heating apparatus and Webb applied his old architectural training to radiators and posters illustrating the installation of modern heating plants in Old World chateaux.

About 1920, he started etching and his work began appearing frequently in the French weekly L’Illustration. During the 1920s and 1930s, Webb lived and worked in both France and the United States. He etched many architectural images of France and Italian cities and American centers such as New York, Chicago, and Pittsburg. Many of Webb’s European views were published and exhibited by the Marcel Guiot Gallery, Paris.[3]

Mather Tower (later Lincoln Tower, as designated on the Michigan–Wacker Historic District roster; now identified primarily by its address) is a Neo-Gothic, terra cotta-clad high-rise structure in Chicago, Illinois, United States. It is located at 75 East Wacker Drive in the downtown “loop” area, adjacent to the Chicago River.

The 521-foot-high building is sometimes called “The Inverted Spyglass” by Chicagoans due to its highly unusual design, a 18-story octagonal tower atop a more conventional 24-story rectangular “box.” Briefly the tallest building in Chicago at the time of its completion in 1928, it remains the city’s most slender high-rise structure at only 100 by 65 feet at its base. The interior space within the upper octagonal spire contains the least square footage per floor of any Chicago skyscraper.[1]

It was designed by Herbert Hugh Riddle (1875–1939), the architect of the Chicago Theological Seminary,[2] as headquarters for the Mather Stock Car Company, a builder of rail cars for transporting livestock. Its design was greatly influenced by the pioneering Chicago Zoning Ordinance of 1923, which placed no limit on the height of new buildings as long as the surface area of the structure’s uppermost floor did not exceed 25% of its footprint. This resulted in a multitude of tall, slender, “setback” towers, of which the Mather is an extreme and unusual example. The top floor of the octagonal spire has only 280 square feet (26 m2) of floor space.[2]

Mather Company’s founder, Alonzo Mather (a descendent of Cotton Mather) is said to be responsible for a number of the building’s distinctive design features, including the octagonal tower.[2] Initial plans called for construction of a second, identical building on North Michigan Avenue, behind the Mather and connected to it by a ground-floor arcade, but onset of the Great Depression in 1929 forced its cancellation.[2]

By the 1990s the building had fallen into significant disrepair. In 2000 the 4-story “cupola” at the top of the building was demolished because of structural deterioration and safety concerns, after chunks of terra cotta began falling from the facade.[3] Damage was sufficiently extensive that consideration was given to dismantling the remaining 17 stories of the octagonal spire as well.[1]

In 2000 Masterworks Development Corporation purchased the structure and undertook a complete restoration. In November 2002, the final phase of the project was initiated when a helicopter lifted the steel framework for a new cupola from a river barge to the top of the tower.[4]

The lower, rectangular portion of the building currently houses the River Hotel, while the octagonal upper stories are occupied by a branch of the Club Quarters chain of membership corporate accommodations.

Mather Tower was designated a Chicago Historic Landmark in 2001,[5] and in 2006 it received a National Preservation Honor Award from the National Trust for Historic Preservation.

THIS IS A VERY RARE ORIGINAL ETCHING!!

The original owner was a stockbroker based in Dallas, TX in the 1920’s and 30’s. He conducted most of his stock market trade through the Chicago Markets. We believe that he purchased this etching in Chicago at that time. It has remained in family ownership ever since.

Condition: In original frame, with original matting and under glass. Very good condition with little or no fading or foxing.