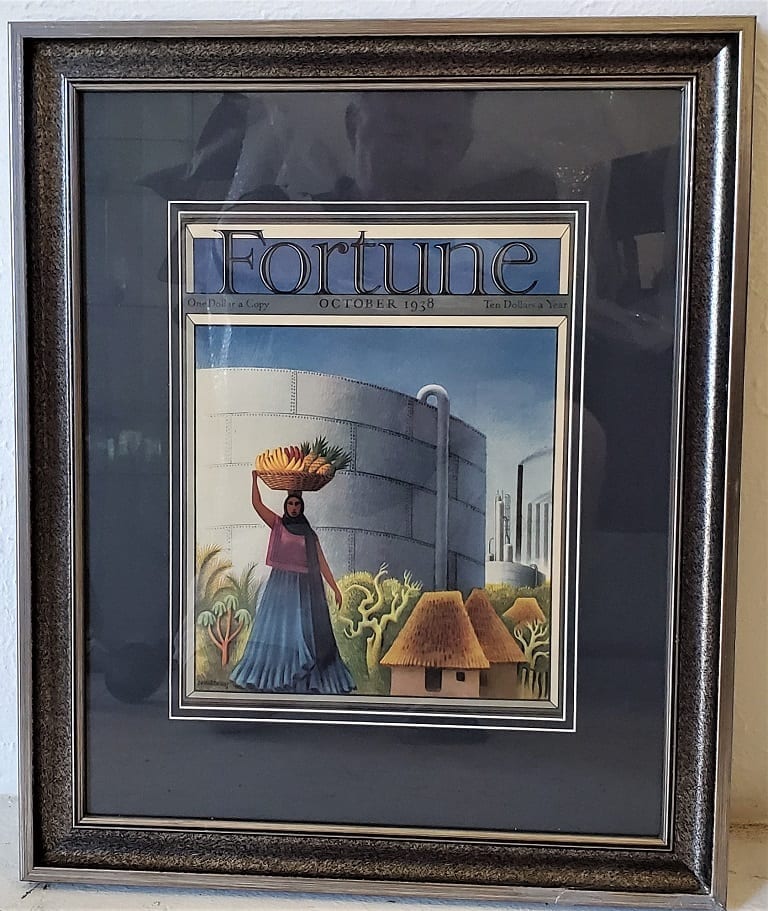 The cover of Fortune Magazine for October 1938, framed and matted.

The frame is modern. It is a silver, industrial style frame with black and white beveled matting. The frame and matting are perfect for the style of the era.

The cover print is an Art Deco depiction of an ethnic Hispanic Village and Lady carrying a basket of fruit on her head with industrialization in the background in CLASSIC ART DECO STYLE !

Pained by ‘Covarrubias’ as noted and signed on the bottom left.

For more on Jose Miguel Covarrubias check out the following:

Miguel’s artwork and celebrity caricatures have been featured in The New Yorker and Vanity Fair magazines. The linear nature of his drawing style was highly influential to other caricaturists such as Al Hirschfeld. Miguel’s first book of caricatures The Prince of Wales and Other Famous Americans was a hit, though not all his subjects were thrilled that his sharp, pointed wit was aimed at them. He immediately fell in love with the Harlem jazz scene, which he frequented with Rosa and friends including Eugene O’Neill and Nickolas Muray. He counted many notables among his friends including Zora Neale Hurston, Langston Hughes and W.C. Handy for whom he also illustrated books. Miguel’s caricatures of the jazz clubs were the first of their kind printed in Vanity Fair. He managed to capture the spirit of the Harlem Renaissance in much of his work as well as in his book, Negro Drawings. He did not consider these caricatures, but serious drawings of people, music and a culture he loved. Covarrubias also did illustrations for George Macy, the publisher of The Limited Editions Club, including Uncle Tom’s Cabin, Green Mansions, Herman Melville‘s Typee, and Pearl Buck‘s All Men Are Brothers. Heritage Press, the sister organization of The Limited Editions Club, reprinted unsigned editions. In addition he did illustrations for publisher Alfred & Charles Boni’s Frankie and Johnny for a young writer who would become a good friend and film director named John Huston. Today, these editions are very sought after by collectors. He collaborated in Austrian Artist Wolfgang Paalen‘s journal Dyn from 1942–44. Additionally his advertising, painting and illustration work brought him international recognition including gallery shows in Europe, Mexico and the United States as well as awards such as the 1929 National Art Directors’ Medal for painting in color for his work on a Steinway & Sons piano advertisement.

Covarrubias was invited by the 1939-1940 Golden Gate International Exposition (GGIE) that was held on Treasure Island, “to create a mural set entitled Pageant of the Pacific to be the centerpiece of Pacific House, ‘a center where the social, cultural and scientific interests of the countries in the Pacific Area could be shown to a large audience.'”[1] Covarrubias painted the six murals for GGIE in San Francisco with his assistant Antonio M. Ruiz. The set of murals featured oversized, “illustrated maps entitled: The Fauna and Flora of the Pacific, Peoples, Art and Culture, Economy, Native Dwellings, and Native Means of Transportation. These murals were immensely popular at the GGIE and were later exhibited at the American Museum of Natural History in New York. Upon returning to San Francisco, five of the murals were installed at the World Trade Club in the Ferry Building where they hung until 2001. The whereabouts of the sixth mural, Art and Culture, are unknown and has been the subject of great speculation.”[1]

The Fauna and Flora of the Pacific mural is now on display at the de Young museum in San Francisco. “The colorful map depicts the four Pacific Rim continents with examples of their flora and fauna suspended in a swirling Pacific Ocean populated with sea creatures.”

Covarrubias’ style was highly influential in America, especially in the 1920s and 1930s, and his artwork and caricatures of influential politicians and artists were featured on the covers of The New Yorker and Vanity Fair.[1]

Covarrubias is also known for his analysis of the pre-Columbian art of Mesoamerica, particularly that of the Olmec culture, and his theory of Mexican cultural diffusion to the north, particularly to the Mississippian Native American Indian cultures. His analysis of iconography presented a strong case that the Olmec predated the Classic Era years before this was confirmed by archaeology. In his thesis of a final cultural battle between Olmecs and Maya he was encouraged by his friend, the Austrian Surrealist and ethnological philosopher Wolfgang Paalen, who even went so far to describe the conflict as one of ancient matriarchal culture with new patriarchal orientations in Maya culture with its dominant adoration of the male sun-god Kukulkan. Both Paalen and Covarrubias published their ideas in Paalen’s magazine DYN. Covarrubias interest in anthropology went beyond the arts and beyond the Americas—Covarrubias lived in and wrote a thorough ethnography of the “Island of Bali“. He shared his appreciation of foreign cultures with the world through his drawings, paintings, writings, and caricatures.

Condition: Near Mint. Slight repair to bottom right of frame but not noticeable.