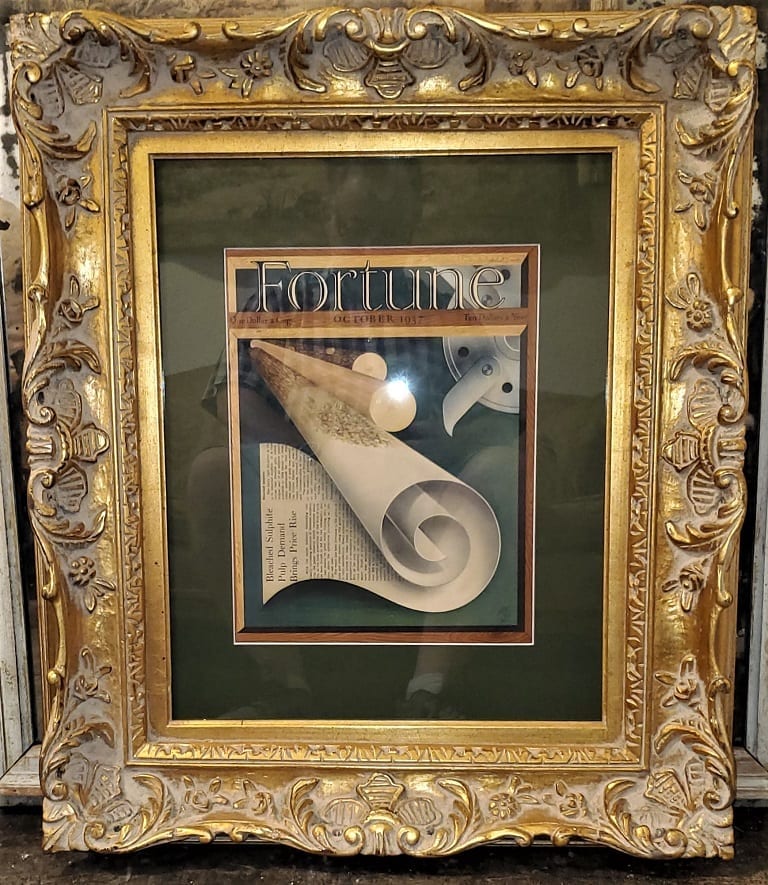 The cover of Fortune Magazine for October 1937, framed and matted.

This is an ORIGINAL COVER, not a re-print or copy. It is the cover of an actual 1937 Fortune Magazine and we can 100% certify it’s authenticity. We have attached a COA on the back of the frame.

The frame is a gilt wood frame, with acid free green and white beveled matting. Glass front. The frame and matting are perfect for the style of the era and really show off the cover.

The cover print is a an industrial image depicting paper manufacture in classic ART DECO STYLE !

Paolo Federico Garretto studied architecture in Rome , but devoted himself, as a student, to graphics [1] . He began working as a caricaturist and advertising painter in London and in 1930 in Paris . Subsequently he moved to Turin , [2] as correspondent and designer, for the Gazzetta del Popolo , from Paris and New York .
In Italy he collaborated, again as a draftsman, from 30 onwards in Nature , La Lettura , The illustrated magazine of the People of Italy , Il Becco giallo [3] ,Arbiter , Humor , etc. His caricatures always attracted the attention of some foreign newspapers and magazines, in which he became a collaborator. Among them, Vanity Fair , The New Yorker , Fortune and House & Garden . He moved to the United States and was forced to return to Italy following the outbreak of the war . Refusal of the order by the Nazis to carry out caricatures of Roosevelt and other allied political leaders cost him deportation and imprisonment in Hungary until 1942. [4] After the war, he worked for the magazine Epoca [5] .

In 1956 the Italian Advertising Federation awarded him the gold medal.

He died on 3 August 1989 in Montecarlo , where he had lived for some time, at the Princess Grace Hospital.

With his drawings he illustrated over fifty years of history and entertainment in the world, they also tell the other side of the medal of what the historian Giordano Bruno Guerri has called “the greatest Italian caricaturist of the century” [7] [8] .

Paolo Garretto, known above all for his political portraits, after the triumphal years of Leonetto Cappiello , in the period in which Cassandre operated in France, emerged among the most interesting renovators of graphics , advertising painting , the poster and poster design , both for the light-hearted elegance of the composition , both for the promptness with which he intuited the characters (see his: Chaplin , Totò , Macario , Mussolini , De Gaulle , Hitler , his Negus del1936 , D’Annunzio , Gandhi , Bartali , Onassis , John F. Kennedy , Marilyn Monroe , Marlene Dietrich , André Gide , Margaret Thatcher , the Beatles , etc.), and finally for the application of new or unusual graphic techniques, such as those that make use of the airbrush , the backgrounds of the mask, the typographic screens , the various photographic procedures , etc.