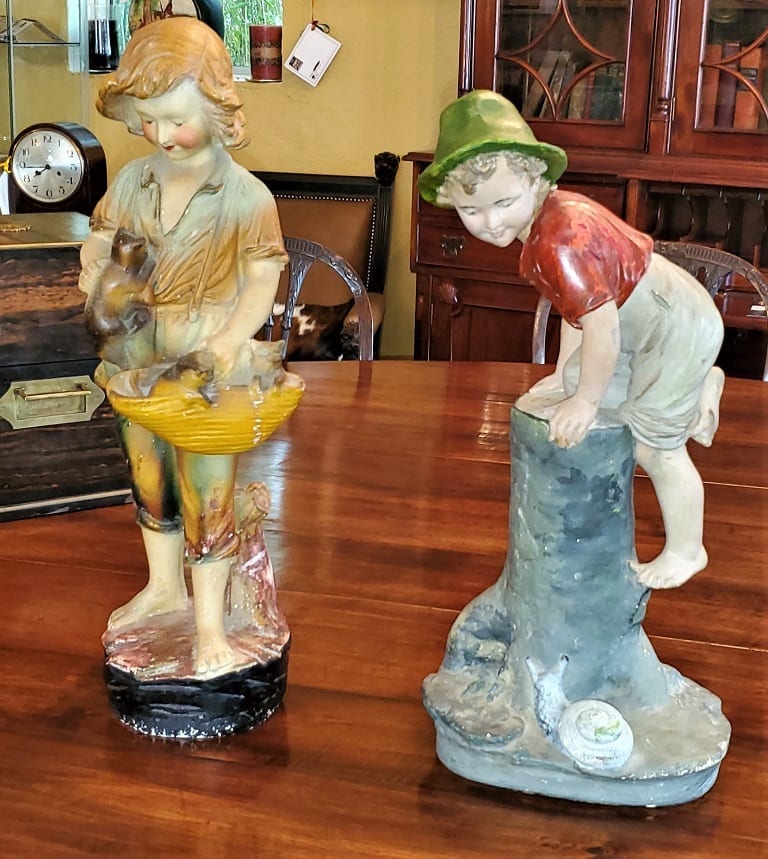 Not a matching pair but similarly themed, with the little girl holding a basket of kittens with one kitten climbing up her front and the other of a little boy climbing a tree stump with a snail at the base.

The ‘Little Girl’ is painted stoneware or earthenware and we are of the opinion is Polish in origin (or possibly Russian). It does not have any identifiable markings but it was originally with another similar style figurine (not included in this sale) which had markings that we were of the opinion were Polish markings.

The ‘Little Boy’ is painted pottery and we are of the opinion that it is either Polish or German in origin. It is slightly different in style an texture to the girl and has a more ‘bisque’ finish. The facial features are more defined and remind me of German Bisque Dolls.

Bolesławiec pottery (English: BOWL-swavietz), also referred to as Polish pottery, is the collective term for fine pottery and stoneware produced in the town of Bolesławiec, in south-western Poland.

The art originated in the late Middle Ages, but it fully developed in the 19th century and has continued ever since. Each product is characterized by an iconic blue decorative pattern on a white base background, with alternative touches of green and yellow elements. The scope of the stoneware ranges from teapots and jugs to plates, platters and candelabra. The pottery is collectively known as “Polish stoneware”, as it became one of Poland’s unofficial cultural symbols.

Ceramics has been a part of Bolesławiec and the entire region’s history for an extremely long time. Potters and ceramic artists are on record from as early as the 14th century, with the first written record of a potter in the municipal books of Świdnica in 1380. However, archaeological digs have shown pottery and ceramics from the early Middle Ages, and trading patterns strongly indicate their presence at such an early time.

Potters from the Bolesławiec area first united into a guild around the start of the 17th century.  Most of the earliest remaining pieces date from the beginnings of the eighteenth century. They are characterized by the brown glaze and were usually pitchers or jug type vessels. Some of the vessels are lidded forms with attached tin lids, though many are open. They are wheel made and uniform in shape, and were either smooth or bore a diagonal ridge pattern. Most bear a mark of some kind, usually an individual’s initials and a date.

Starting around the middle half of the 18th century the vessels started to become characterized by a natural flowing motif of “sticks”, or a raised design of flowers and leaves on a stem. The sticks were a light white in color, with the surrounding pot usually brown. This added contrast and aesthetic appeal.

Throughout the late 18th century and early 19th century the stick motif was still popular. Other popular motifs included the Boleslawiec emblem, the potter’s emblem of Adam and Eve, heraldic signs, and nature motifs like florals and birds. Pitchers, mugs, and tankards were the most commonly produced works.

Around the latter half of the 19th century the white clay that had previously been used only for the stick motif started to be used for whole vessels. This was due to the innovation of Johann Gottlieb Altmann, a master potter who was the first to cast dishes instead of throwing them on the wheel. Altmann also used a new type of lead-free glaze that enabled stamping and allowed for new motifs and designs. Most of the more recognizable designs today, like the repeating circles, scales, flowers, dots, and clovers, were created at that time.

The most famous Pole who was engaged in the production of ceramics in the regions of Bolesławiec was Stanislaw Wiza. In 1963, he founded the company Ceramika Wiza, which still produces ceramics by traditional methods. Company manages the daughter of Stanislaw Wiza, Lidia Jop, who continues the family tradition

Provenance: From the Private Collection of a former New Orleans Dealer.