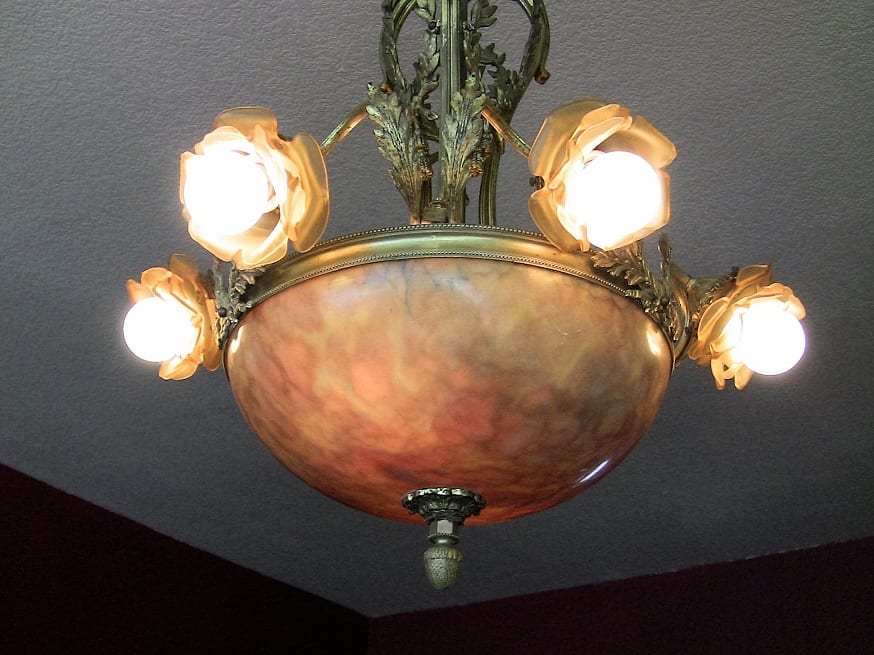 3 sheafs of wheat top the shade.

8 bulbs…….2 internally inside the shade and 6 on the outside, each with a frosted glass shade with brown and orange tones. Each external light and shade is supported on a curved and beautifully cast support replication a flower stalk. 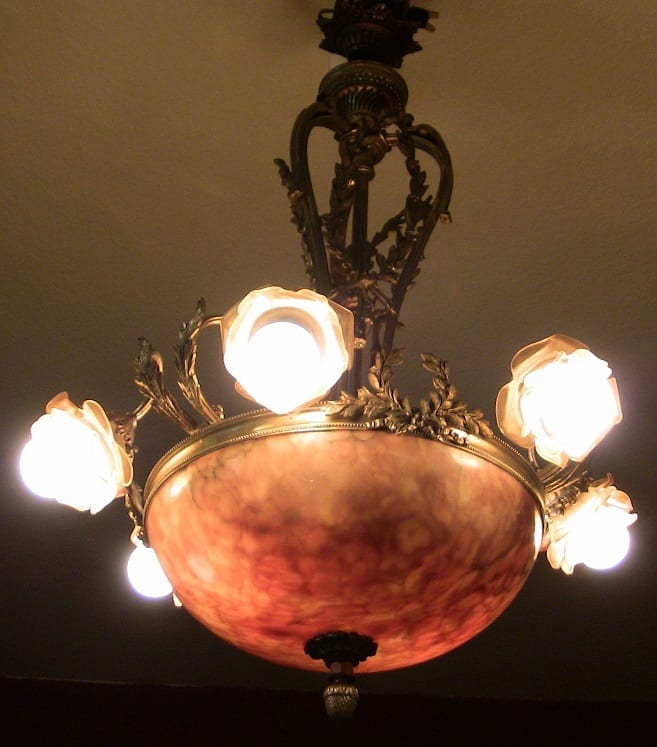 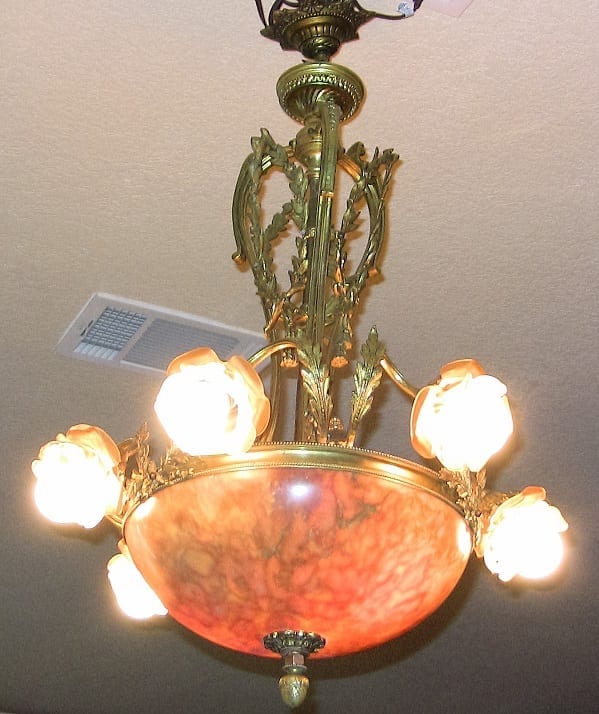 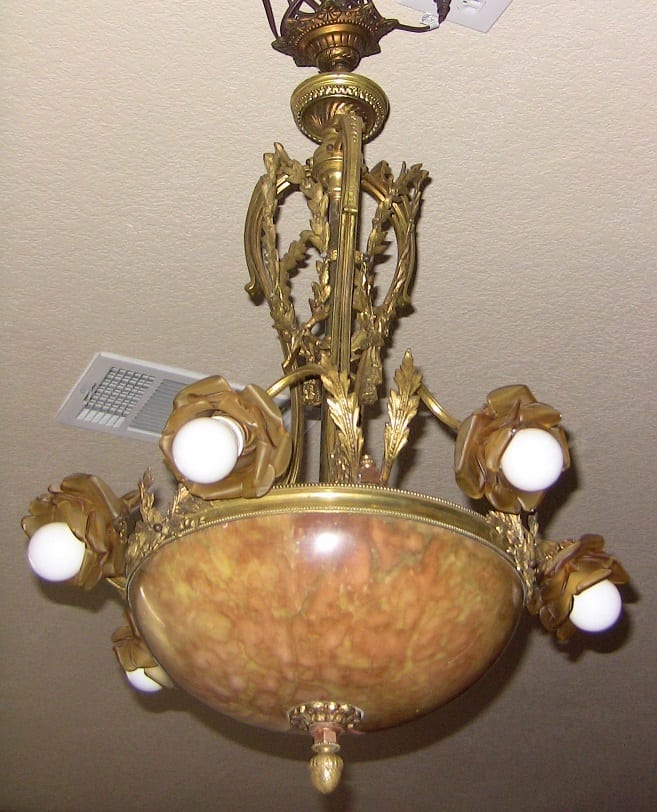 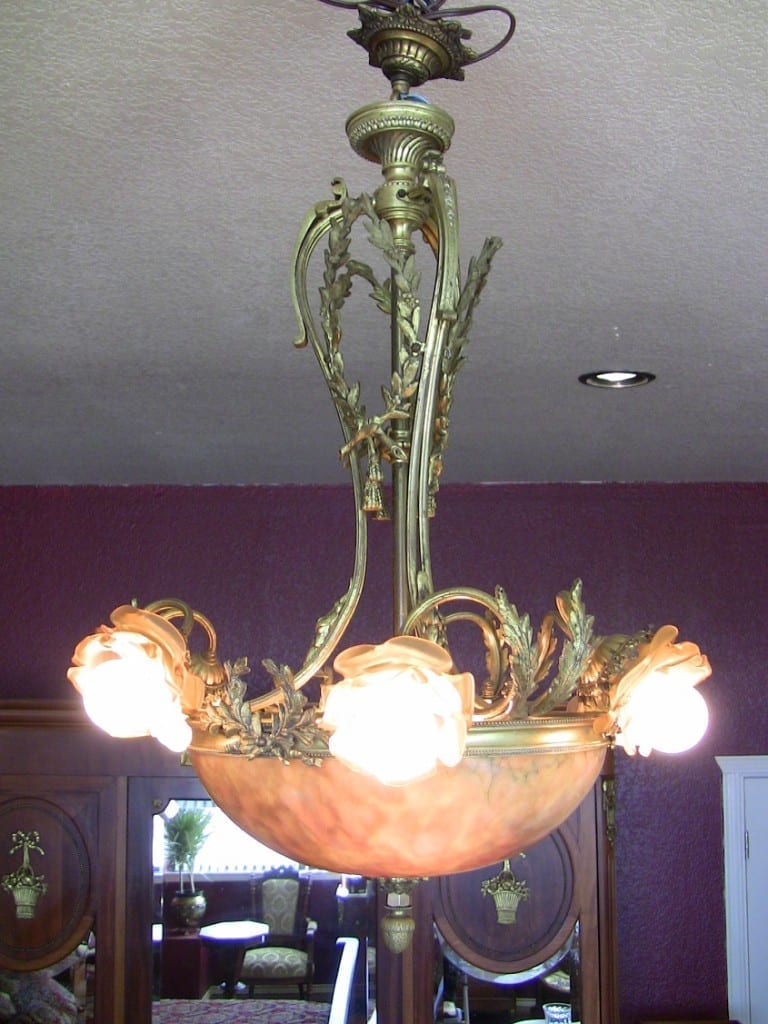 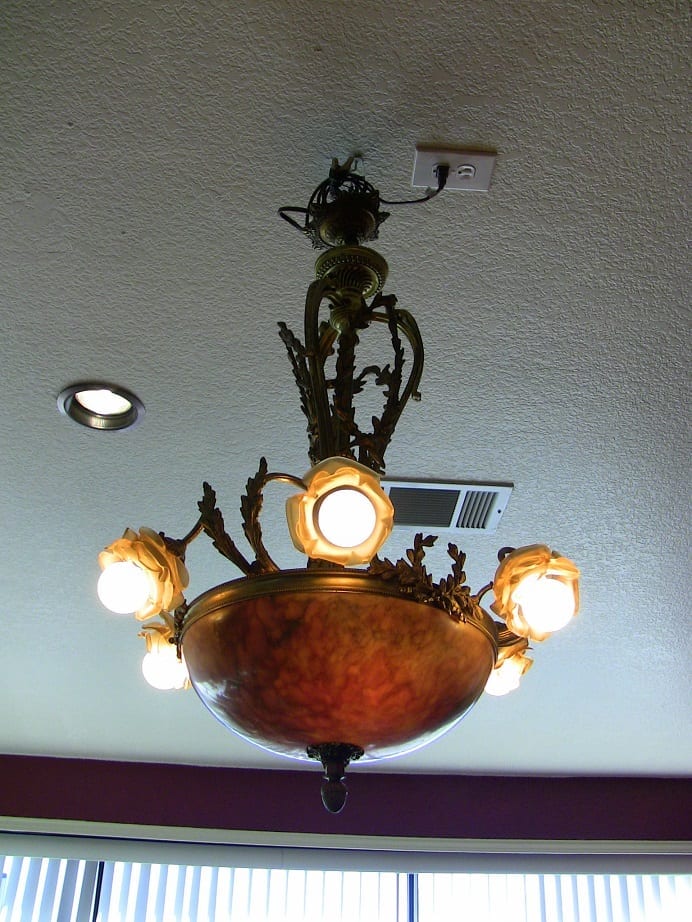 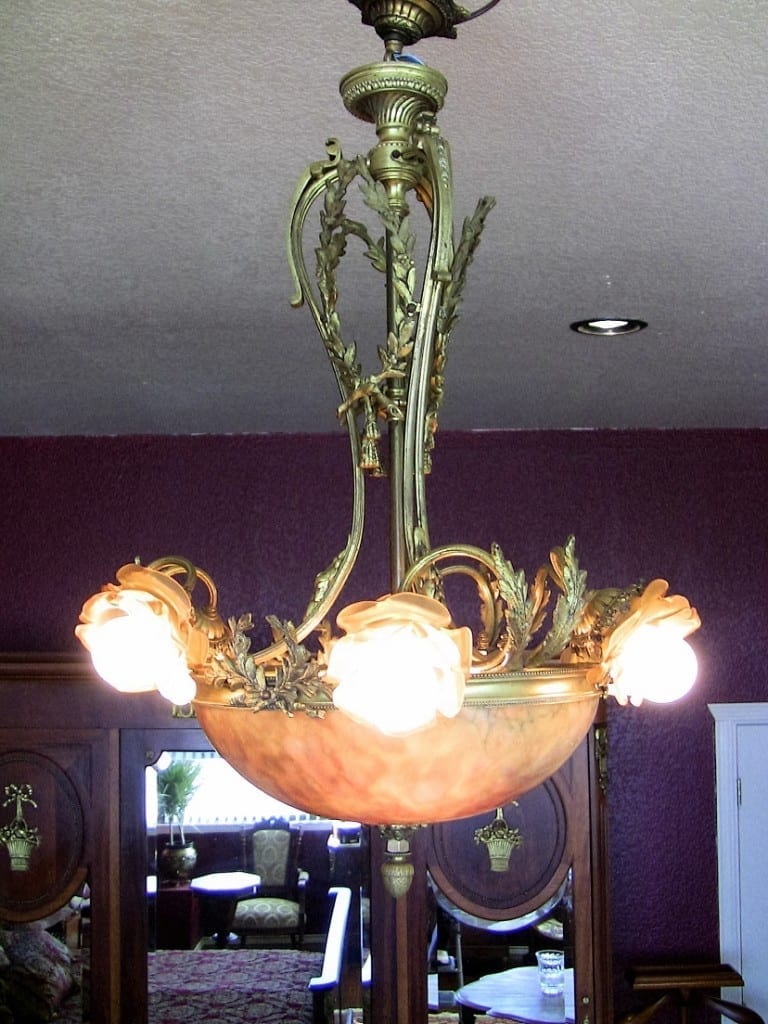 Beautiful casting on all fittings…..the ceiling rose is also beautifully cast and chased in a starburst pattern.

The chandelier ends in a large Acorn Finial.

What a beautiful and rare piece !!!

CHANDELIER: The word chandelier was first known in the English language in the 1736, borrowed from the Old French word chandelier, which comes from the Latin candelabrum.[2]
A chanderlier in one of the Durga Puja pandals in West Bengal, India
One of the largest chandeliers in the world ever produced for the Al Ameen Mosque in Muscat (Oman) shortly before delivery.
History
An antique chandelier with candles in Amsterdam’s Portuguese Synagogue
Illustration of a medieval chandelier from King René’s Tournament Book, 1460

The earliest candle chandeliers were used by the wealthy in medieval times, this type of chandelier could be moved to different rooms.[3] From the 15th century, more complex forms of chandeliers, based on ring or crown designs, became popular decorative features in palaces and homes of nobility, clergy and merchants. Its high cost made the chandelier a symbol of luxury and status.

By the early 18th century, ornate cast ormolu forms with long, curved arms and many candles were in the homes of many in the growing merchant class. Neoclassical motifs became an increasingly common element, mostly in cast metals but also in carved and gilded wood. Chandeliers made in this style also drew heavily on the aesthetic of ancient Greece and Rome, incorporating clean lines, classical proportions and mythological creatures.[4] Developments in glassmaking later allowed cheaper production of lead crystal, the light scattering properties of which quickly made it a popular addition to the form, leading to the crystal chandelier.

During the 18th century glass chandeliers were produced by Bohemiens and Venetian glassmakers who were both masters in the art of making chandeliers. Bohemian style was largely successful across Europe and its biggest draw was the chance to obtain spectacular light refraction due to facets and bevels of crystal prisms. As a reaction to this new taste Italian glass factories in Murano created new kinds of artistic light sources. Since Murano glass was not suitable for faceting, typical work realized at the time in other countries where crystal was used, venetian glassmakers relied upon the unique qualities of their glass. Typical features of a Murano chandelier are the intricate arabeques of leaves, flowers and fruits that would be enriched by coloured glass, made possible by the specific type of glass used in Murano. This glass they worked with was so unique, as it was soda glass (famed for its extraordinary lightness) and was a complete contrast to all different types of glass produced in the world at that time. An incredible amount of skill and time was required to precisely twist and shape a chandelier. This new type of chandelier was called “ciocca” literally bouquet of flowers, for the characteristic decorations of glazed polychrome flowers. The most sumptuous of them consisted of a metal frame covered with small elements in blown glass, transparent or colored, with decorations of flowers, fruits and leaves, while simpler model had arms made with a unique piece of glass. Their shape was inspired by an original architectural concept: the space on the inside is left almost empty since decorations are spread all around the central support, distanced from it by the length of the arms. One of the common use of the huge Murano Chandeliers was the interior lighting of theatres and rooms in important palaces.[5]

In the mid-19th century, as gas lighting caught on, branched ceiling fixtures called gasoliers (a portmanteau of gas and chandelier) were produced, and many candle chandeliers were converted. By the 1890s, with the appearance of electric light, some chandeliers used both gas and electricity. As distribution of electricity widened, and supplies became dependable, electric-only chandeliers became standard. Another portmanteau word, electrolier, was formed for these, but nowadays they are most commonly called chandeliers. Some are fitted with bulbs shaped to imitate candle flames, for example those shown below in Epsom and Chatsworth, or with bulbs containing a shimmering gas discharge.

More complex and elaborate chandeliers continued to be developed throughout the 18th and 19th centuries, but the widespread introduction of gas and electricity had devalued the chandelier’s appeal as a status symbol.

Toward the end of the 20th century, chandeliers were often used as decorative focal points for rooms, and often did not illuminate.

ALABASTER: Alabaster is a name applied to varieties of two distinct minerals when used as a material: gypsum (a hydrous sulfate of calcium); and calcite, a carbonate of calcium, also known as onyx-marble, Egyptian alabaster, or Oriental alabaster. In geological terms, alabaster is “a stalagmitic limestone marked with patterns of swirling bands of cream and brown”.[1] In general (but not always), ancient alabaster is calcite in Egypt, the Near East, and the Middle East. Alabaster is gypsum in medieval Europe. Modern alabaster is probably calcite, but may be either. Both are easy to work and both are slightly water-soluble. They have been used for making a variety of indoor artworks and carvings, as they will not survive long outdoors.

The two kinds are readily distinguished from each other by differences in their relative hardness. The gypsum kind is so soft as to be scratched with a fingernail (Mohs hardness 1.5 to 2), while the calcite kind is too hard to be scratched in this way (Mohs hardness 3), although it does yield to a knife. Moreover, the calcite alabaster, being a carbonate, effervesces upon being touched with hydrochloric acid, whereas the gypsum alabaster remains practically unaffected when thus treated.

Provenance: Bought from a reputable dealer in Ireland.

Provenance: Bought from a private dealer in Ireland 15 years ago.

Condition: Very Good. Evidence of an ‘historic’ repair to the alabaster shade but does not detract from it’s beauty.