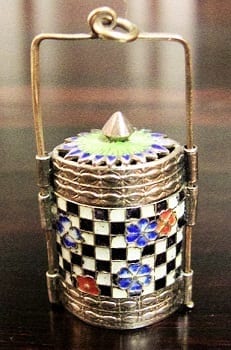 This is a little, miniature, Cloisonne enameled Japanese Inro …… that can worn as a charm.

It consists of a central vessel or barrel shaped container for holding a keepsake. The lid raises on the 2 side support arms….that are connected by way of a handle with a ring for attaching to clothing or necklace or bracelet.

The central vessel is enameled in a checkerboard effect  with clack and white squares indispersed with red and blue enamel flowers.

The rising lid has a pointed final on top of a gorgeous starburst of green and blue enamel. INRO: The term inrō derives from the Sino-Japanese roots in (from Middle Chinese ‘jin 印 “printed”) and rō (MC luwng 籠 “cage”). Because traditional Japanese robes lacked pockets, objects were often carried by hanging them from the obi, or sash, in containers known as sagemono (a Japanese generic term for a hanging object attached to a sash). Most sagemono were created for specialized contents, such as tobacco, pipes, writing brush and ink, but the type known as inrō was suitable for carrying anything small.

Consisting of a stack of tiny, nested boxes, inrō were most commonly used to carry identity seals and medicine. The stack of boxes is held together by a cord that is laced through cord runners down one side, under the bottom, and up the opposite side. The ends of the cord are secured to a netsuke, a kind of toggle that is passed between the sash and pants and then hooked over the top of the sash to suspend the inrō. An ojime, or bead, is provided on the cords between the inrō and netsuke to hold the boxes together. This bead is slid down the two suspension cords to the top of the inrō to hold the stack together while the inrō is worn, and slid up to the netsuke when the boxes need to be unstacked to access their contents. Inrō were made of a variety of materials, including wood, ivory, bone, and lacquer. Lacquer was also used to decorate inro made of other materials.

Inrō, like the ojime and netsuke they were associated with, evolved over time from strictly utilitarian articles into objects of high art and immense craftsmanship.

Cloisonné is an ancient technique for decorating metalwork objects, in recent centuries using vitreous enamel, and in older periods also inlays of cut gemstones, glass, and other materials. The resulting objects can also be called cloisonné. The decoration is formed by first adding compartments (cloisons in French[1]) to the metal object by soldering or affixing silver or gold wires or thin strips placed on their edges. These remain visible in the finished piece, separating the different compartments of the enamel or inlays, which are often of several colors. Cloisonné enamel objects are worked on with enamel powder made into a paste, which then needs to be fired in a kiln.

The technique was in ancient times mostly used for jewellery and small fittings for clothes, weapons or similar small objects decorated with geometric or schematic designs, with thick cloison walls. In the Byzantine Empire techniques using thinner wires were developed to allow more pictorial images to be produced, mostly used for religious images and jewellery, and by then always using enamel. By the 14th century this enamel technique had spread to China, where it was soon used for much larger vessels such as bowls and vases; the technique remains common in China to the present day, and cloisonné enamel objects using Chinese-derived styles were produced in the West from the 18th century.