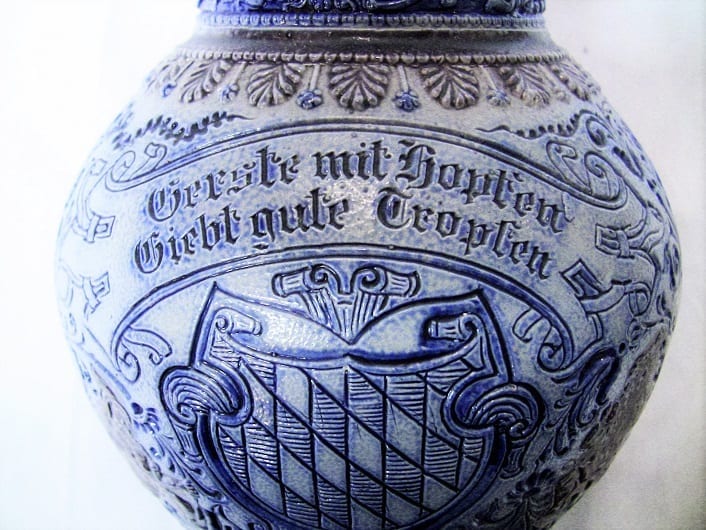 This is a beautifully cast piece of German pottery……..it has a blue and brown glaze to it……..created by throwing salt and iron oxide into the kiln when firing.

The jug is inscribed with a verse…’ Gerste mit Hopten Giebl gule Tropfen‘ and an armorial crest.

It features various historical characters on the sides.

Probably made in Westerwald.

Many contemporary examples of this type of German Pottery exist and are sold today…………but this one is a 19th Century piece and a definite ‘cut-above’ the norm in terms of age and quality ! The Westerwald (German pronunciation: [ˈvɛstɐvalt]; literally ‘Western Forest’) is a low mountain range on the right bank of the River Rhine in the German federal states of Rhineland-Palatinate, Hesse and North Rhine-Westphalia. It is a part of the Rhenish Massif (Rheinisches Schiefergebirge or Rhenish Slate Mountains). Its highest elevation, at 657 m above sea level, is the Fuchskaute in the High Westerwald.

Tourist attractions include the Dornburg (394 metres), site of some Celtic ruins from La Tène times (5th to 1st century BC), found in the community of the same name, and Limburg an der Lahn, a town with a mediaeval centre.

The geologically old, heavily eroded range of the Westerwald is in its northern parts overlaid by a volcanic upland made of Neogene basalt layers. It covers an area of some 50 × 70 km, and thereby roughly 3 000 km², making the Westerwald one of Germany’s biggest mountain ranges by area. In areas of subsidence, it has in its flatter western part (Lower Westerwald) the characteristics of rolling hills. Typical for the economy of the Upper Westerwald, some 40% of which is actually wooded, are traditional slate mining, clay quarrying, diabase and basalt mining, pottery and the iron ore industry, and among other things mining in the Siegerländer Erzrevier (roughly “Siegerland Ore Grounds”). Despite its relatively slight elevation, the Westerwald has for a low mountain range a typical agreeable climate. Economically and culturally, it belongs among Germany’s best known mountain ranges.

The name “Westerwald” was first mentioned in 1048 in a document from the Electorate of Trier and described at that time the woodlands (Wald is German for “forest” or “woods”) around the three churches in Bad Marienberg, Rennerod and Emmerichenhain, west of the royal court at Herborn. Only since the mid 19th century has the name come into common usage for the whole range.

The High Westerwald has since the Middle Ages formed the heart of the Herrschaft zum (also vom or auf dem) Westerwald (“Lordship over the Westerwald”). This comprised the three court districts of Marienberg, Emmerichenhain and Neukirch. The Lordship later fell under the governance of the Lordship or County of Beilstein.

It is reminiscent of Engel Kran pieces from the 16th Century (check out the example of his work also in this category).

CERAMICS, POTTERY, AND PORCELAIN. Pottery is made from clays taken from the ground and baked, or fired, in a kiln to a temperature of several hundred degrees. Pottery can take many forms but is best known for items thrown on a spinning wheel, where the potter uses centrifugal force to create a perfectly symmetrical round object. However, round pots and other items can also be made by coiling strips of clay together or by pressing clay into molds. Alternatively, it is, of course, possible to create an item entirely by hand modeling.

If a pot is fired and then covered in a layer of glass, or glaze, and fired again, it becomes nonporous and capable of holding liquids. Such low-fired pottery is called earthenware and can take many forms. Pottery made in medieval Europe was in general of low status, considered inferior to items of metal, and used for storage or basic cookery. However, elaborate inlaid clay floor tiles are found in churches and royal palaces.

By the tenth century in Arab countries, tin oxide was being added to a lead-oxide glaze on earthenware, which turned the glaze white in the kiln to produce a pot with the appearance of porcelain. This could be painted in metallic oxides to produce a metallic layer, or luster, or alternatively in colored oxides to create a pictorial effect. In sixteenth-century Italy, painters of tin-glazed earthenware, or maiolica, such as Nicola da Urbino (d. 1537/1538) and Francesco Xanto Avelli (1487?–1542?) became extremely skillful in adapting prints after Renaissance artists such as Raphael (1483–1520) and Michelangelo (1475–1564) to produce ceramics that became independent works of art. More elaborate types, including ewers, basins, and vases, were made in the workshops of the Fontana family in Urbino. Meanwhile, in France the potter Bernard Palissy (c. 1510–1590) was making grottoes (artificial, ornamental caves) and large dishes decorated in colored lead glazes that exactly reproduced the forms of wildlife in imitation of the natural world.

A tougher form of earthenware called stoneware, which was fired to 1200° C, was made in Germany in the sixteenth century and glazed with the addition of salt thrown into the kiln during the firing (salt-glazed stoneware). Large tankards or beer mugs and jugs, suitable for tavern use, with stamped or applied decoration were made at Cologne, Siegburg, Raeren, and the Westerwald, and exported across the whole of the Western world. German stonewares were copied by John Dwight (c. 1635–1703) at Fulham in London and by other potters elsewhere.

Dimensions: 8″ tall with diameter of 6″ at mid-point