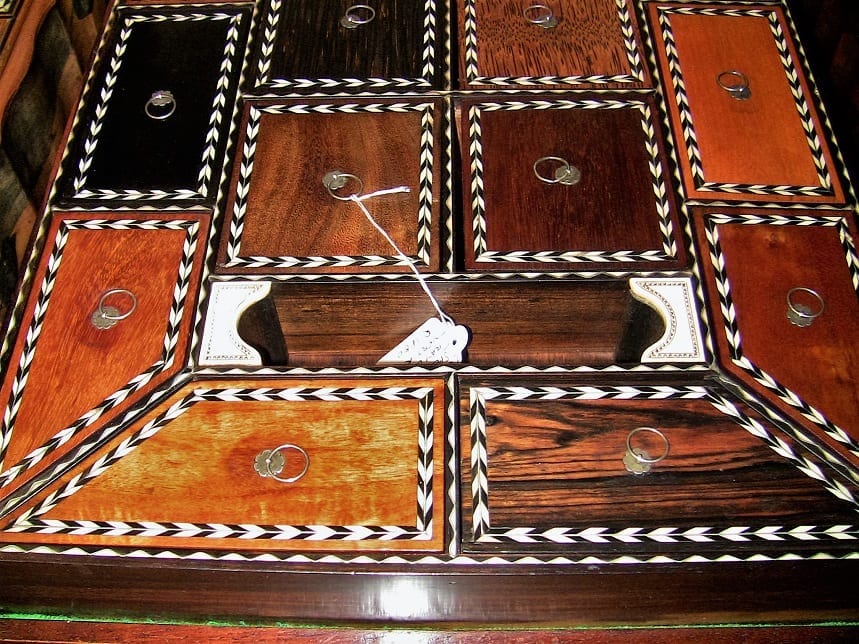 Another stunning 19C Anglo-Ceylonese piece (see the matching box in this category).

Made circa 1880 in Ceylon (Now Sri Lanka) of Coromandel wood and specimen woods.

THIS IS A SIMPLY GORGEOUS AND QUALITY ITEM. 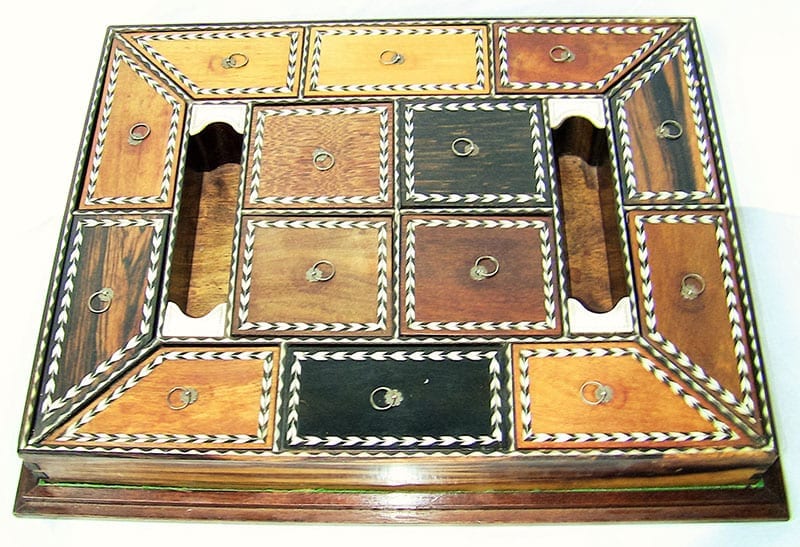 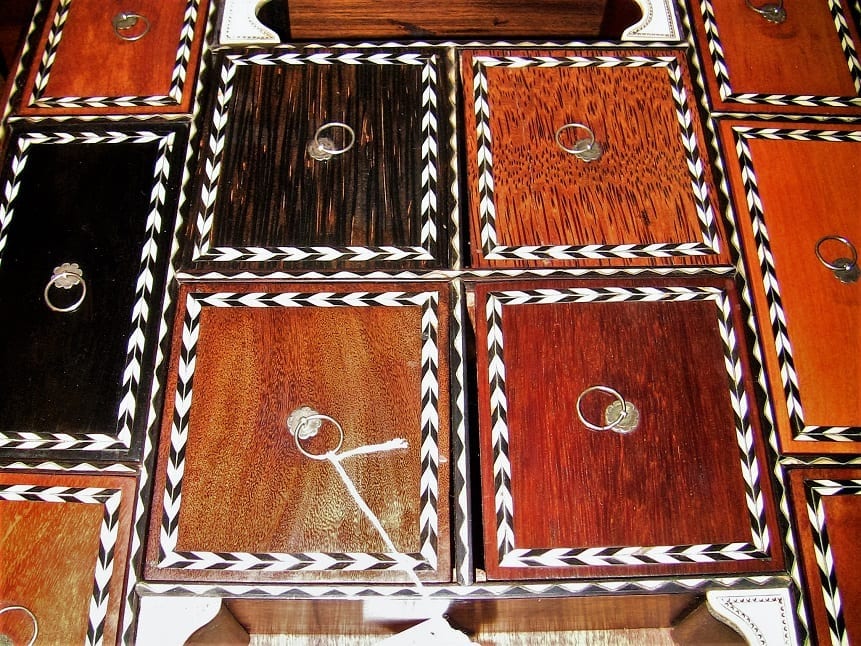 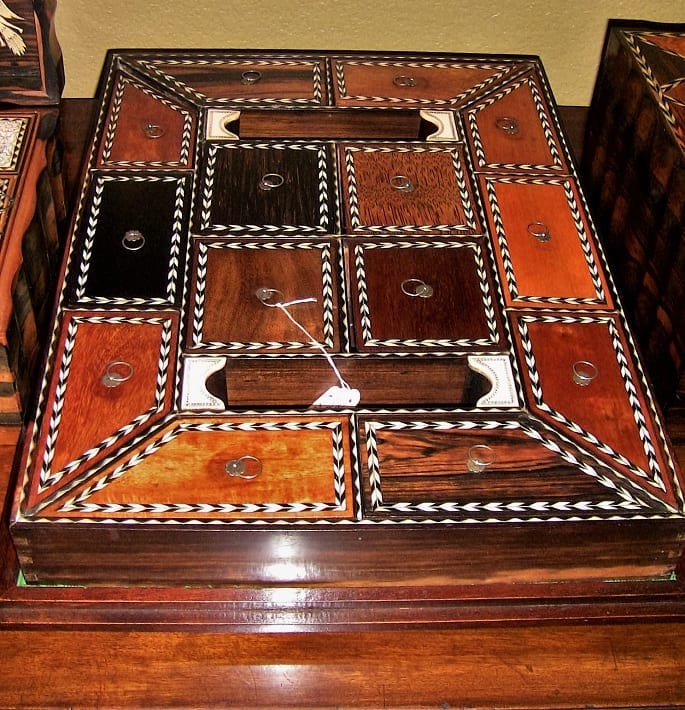 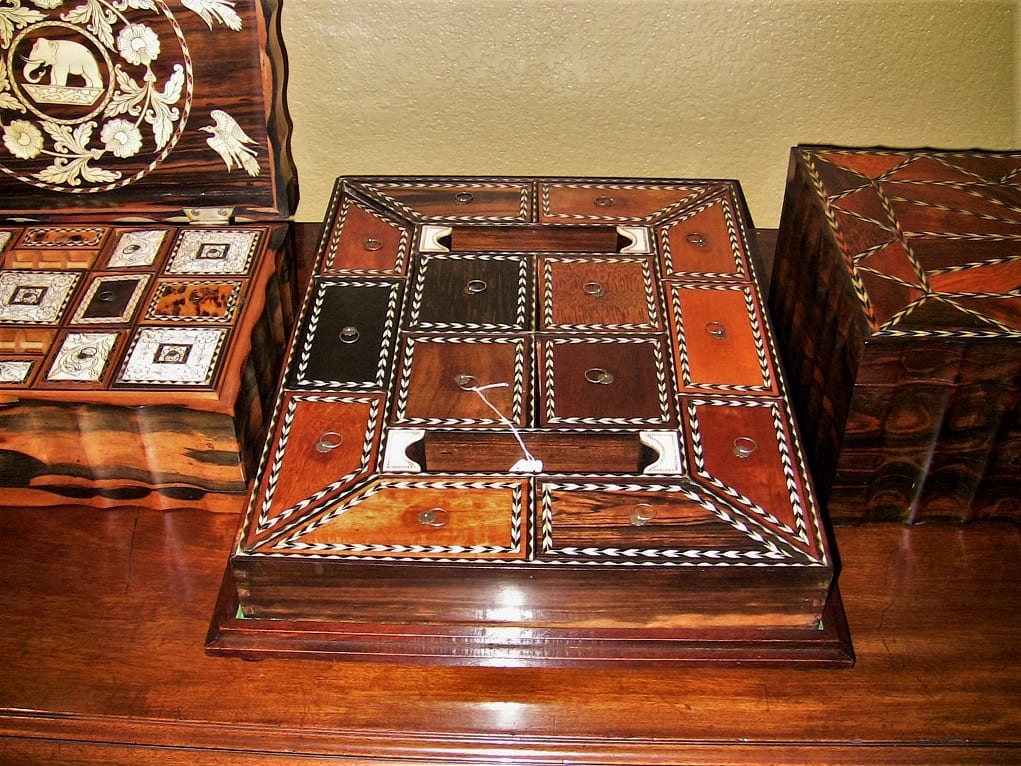 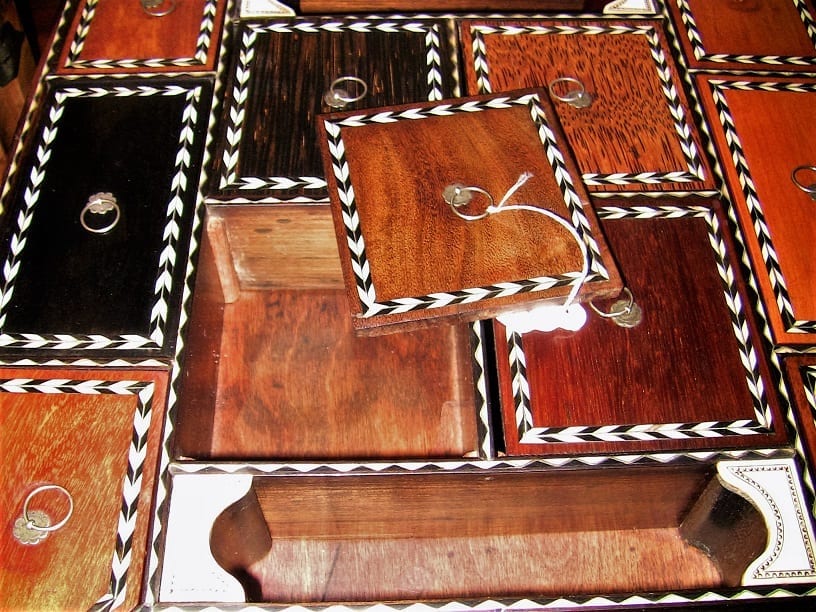 Tray made of various compartments with various high quality specimen wood lids, all edged and banded in chevrons of bone, silver and ebony. The tray itself is made of expensive coromandel wood.

There are two open sections on either side of the tray which have bone and hand painted lac ends.

The main tray sits onto a base made of coromandel wood with green baize lining.

This tray could have a number of practical uses; for keeping stationary, watches, jewelry, or (thinking outside of the box) holding you remote controls.

(1) Most of the best and highest quality Anglo-Indian boxes in the 18th and 19th Centuries were made in Vizagapatam, India………renowned for its exquisite craftsmanship in using ivory and tortoiseshell and lac decoration. These are referred to as ‘Vizagapatam Boxes’.

(3) Many boxes of exquisite quality and craftsmanship were made in Ceylon (modern day Sri Lanka) in the 19th Century. Ceylon was part of the British Indian Colony and was not a seperate Country at that time, hence, the boxes that were made in Ceylon are often categorized as Anglo-Indian. Many of the Anglo-Ceylonese pieces were made in the Goa Region using Porcupine Quill, Coromandel or Salamander wood, ivory, ebony and lac decoration. The Ceylonese lac work was often more colorful than the Vizagapatam classic use of black lac ink.(Lac ink was an indelible ink made from crushing Lac Beetles). Ceylonese boxes and furniture also became famous, due to the use of various exotic specimen woods in the decoration of their boxes and furniture. These specimen wood pieces are HIGHLY PRIZED AND HIGHLY DESIRABLE !!

CHECK OUT THE MATCHING ANGLO-CEYLONESE SPECIMEN WOOD STATIONERY BOX ALSO IN THIS SECTION !