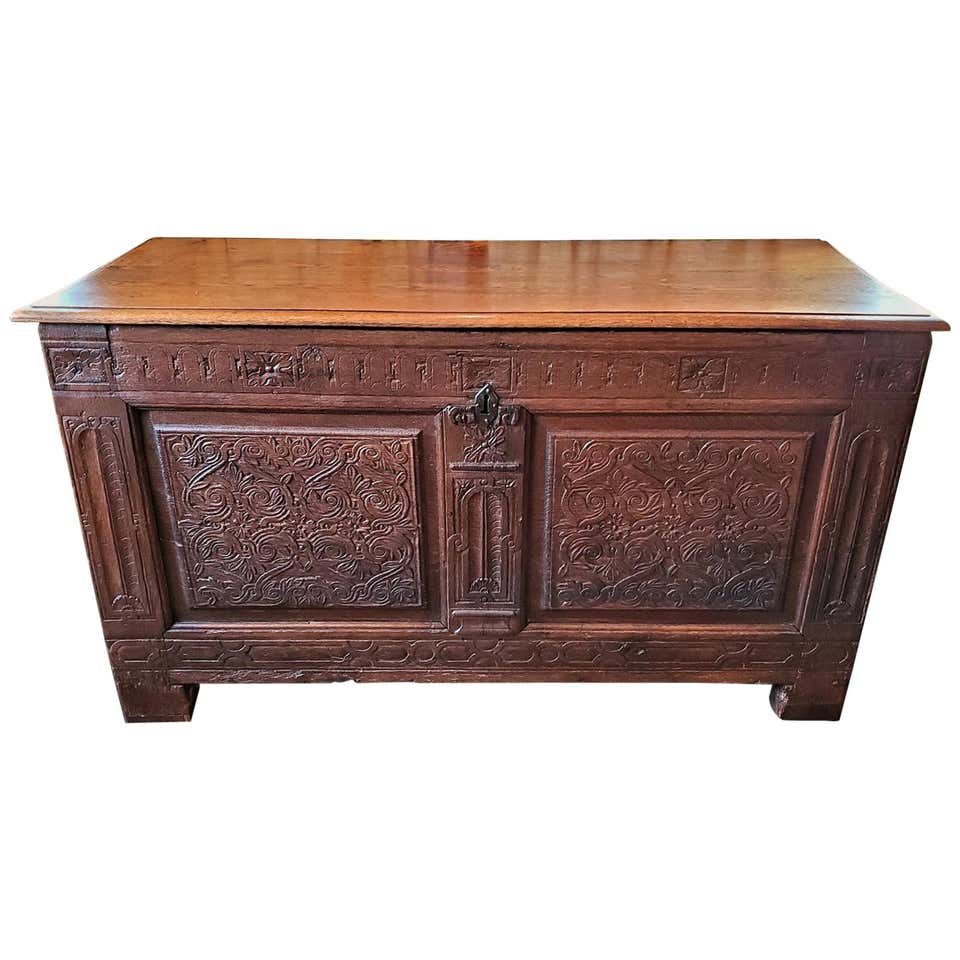 This piece has all the classic signs of genuine age and 17th Century English craftsmanship.

The carvings to the front of the chest are simply STUNNING. Most definitely in the manner and style of Jacobean carving of that period.

The gothic style pillars in particular were classic elements of Jacobean carving.

The front contains 2 large carved panels with profusely carved scrolling floral bouquets. On each pillar there is carved gothic shaped arch which id replicated in the central pillar. The top panels has a series of 5 florettes across the top with another below the escutcheon. The base panel has a series of carved geometric shaped links. On either side of the chest are the 2 original iron handles with scroll ends.

The piece has had some restoration work done to it over it’s 400 year history, as one would expect.

The lid or top is a 20th Century replacement, but the restorer has used beautiful solid oak planks with a patina that matches the base. The legs have had restorative work performed as there is clear evidence of petrification of the original feet which would have occurred naturally over the Centuries from standing on stone floors. This also assists with age verification of the piece. The hinges for the top are 20th Century replacements as is the front escutcheon, but again the restorer has used iron hinges and an escutcheon to attempt to stay as close to the original as possible. It is missing it’s original lock. The interior of the chest is as it was made, simple and with real evidence of natural aging.

To large to be a blanket chest, this was most likely a dowry or silver chest.

The Jacobean era was the period in English and Scottish history that coincides with the reign of James VI of Scotland who also inherited the crown of England in 1603 as James I.[1] The Jacobean era succeeds the Elizabethan era and precedes the Caroline era. The term “Jacobean” is often used for the distinctive styles of Jacobean architecture, visual arts, decorative arts, and literature which characterized that period.

The practical if not formal unification of England and Scotland under one ruler was an important shift of order for both nations, and would shape their existence to the present day. Another development of crucial significance was the foundation of the first British colonies on the North American continent, at Jamestown, Virginia in 1607, in Newfoundland in 1610, and at Plymouth Colony in Massachusetts in 1620, which laid the foundation for future British settlement and the eventual formation of both Canada and the United States of America. In 1609 the Parliament of Scotland began the Plantation of Ulster.

A notable event of James’ reign occurred on 5 November 1605. On that date, a group of English Catholics (including Guy Fawkes) attempted to assassinate the King and destroy Parliament in the Palace of Westminster. However, the Gunpowder Plot was exposed and prevented, and the convicted plotters were hanged, drawn, and quartered.

The fine arts were dominated by foreign talent in the Jacobean era, as was true of the Tudor and Stuart periods in general. Daniel Mytens was the most prominent portrait painter during the reign of James, as Anthony van Dyck would be under the coming reign of his son. Yet the slow development of a native school of painting, which had made progress in the previous reign, continued under James, producing figures like Robert Peake the Elder (died 1619), William Larkin (fl. 1609–19), and Sir Nathaniel Bacon (1585–1627). Some would also claim, as part of this trend, Cornelius Johnson, or Cornelis Janssens van Ceulen (1593–1661), born and trained in London and active through the first two Stuart reigns.[10]

The decorative arts – furniture, for example – became increasingly rich in color, detail, and design. Materials from other parts of the world, like mother-of-pearl, were now available by worldwide trade and were used as decoration.[11] Even familiar materials, such as wood and silver, were worked more deeply in intricate and intensely three-dimensional designs.[11]

Architecture in the Jacobean era was a continuation of the Elizabethan style with increasing emphasis on classical elements like columns. European influences include France, Flanders, and Italy.[12] Inigo Jones may be the most famous English architect of this period, with lasting contributions to classical public building style; some of his works include the Banqueting House in the Palace of Whitehall. St Paul’s Cathedral designed by Sir Christopher Wren in London. See also: Jacobean architecture.

In the domain of customs, manners, and everyday life, the Jacobean era saw a distinctly religious tone.[13] Virginia tobacco became popular. James I published his A Counterblaste to Tobacco in 1604, but the book had no discernible effect; by 1612, London had 7,000 tobacconists and smoking houses. The Virginia colony survived because the English acquired the nicotine habit.

Category: B & I Bedroom Furniture, B & I Furniture - General, B & I Tables, British & Irish