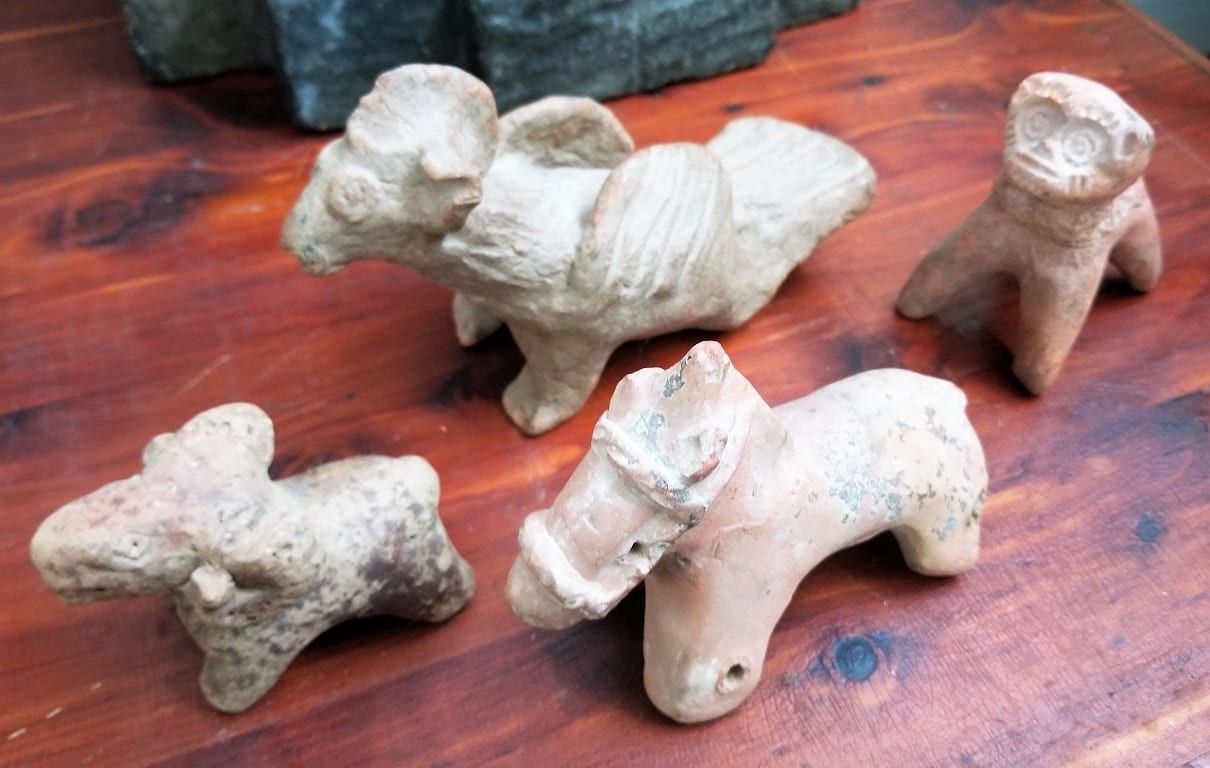 PRESENTING a STUNNING piece of Southeast Asian Antiquity, namely, a Group of 4 Terracotta Animals from the First Century B.C to First Century A.D.

These pieces has impeccable Provenance !

They were purchased by a Private Dallas Collector at Christie’s New York Auction on 16th September 2008. Sale Number 2024, Lot No. 360.

The Auction was titled: “Indian and Southeast Asian Art”.

The sculptures were described as: “ Lot 360 = Property from the Collection of Mr. and Mrs. Paul E. Manheim – A group of four terracotta animals – Indus Valley, Shunga Period, 1st Century BC – 1st Century AD”.

A. Poster, Figures in Clay, Terracottas from Ancient India, The Brooklyn Museum of Art, December 1973

Figures in Clay, Terracottas from Ancient India, The Brooklyn Museum of Art, December 1973 “

The Shunga Empire (IAST: Śuṅga) was an ancient Indian dynasty from Magadha that controlled areas of the central and eastern Indian subcontinent from around 187 to 78 BCE. The dynasty was established by Pushyamitra Shunga, after the fall of the Maurya Empire. Its capital was Pataliputra, but later emperors such as Bhagabhadra also held court at Besnagar (modern Vidisha) in eastern Malwa.[1]

Pushyamitra Shunga ruled for 36 years and was succeeded by his son Agnimitra. There were ten Shunga rulers. However, after the death of Agnimitra, the second king of the dynasty, the empire rapidly disintegrated:[2] inscriptions and coins indicate that much of northern and central India consisted of small kingdoms and city-states that were independent of any Shunga hegemony.[3] The dynasty is noted for its numerous wars with both foreign and indigenous powers. They fought the Kalinga, the Satavahana dynasty, the Indo-Greek Kingdomand possibly the Panchalas and Mitras of Mathura.

Art, education, philosophy, and other forms of learning flowered during this period including small terracotta images, larger stone sculptures, and architectural monuments such as the stupa at Bharhut, and the renowned Great Stupa at Sanchi. Shunga rulers helped to establish the tradition of royal sponsorship of learning and art. The script used by the empire was a variant of Brahmi script and was used to write Sanskrit.

The Shunga Empire played an imperative role in patronizing culture at a time when some of the most important developments in Hindu thought were taking place. Patanjali‘s Mahābhāṣyawas composed in this period. Artistry also progressed with the rise of the Mathura art style.

The last of the Shunga emperors was Devabhuti (83–73 BCE). He was assassinated by his minister (Vasudeva Kanva) and is said to have been overfond of the company of women. The Shunga dynasty was then replaced by the subsequent Kanvas. The Kanva dynasty succeeded the Shungas around 73 BCE.