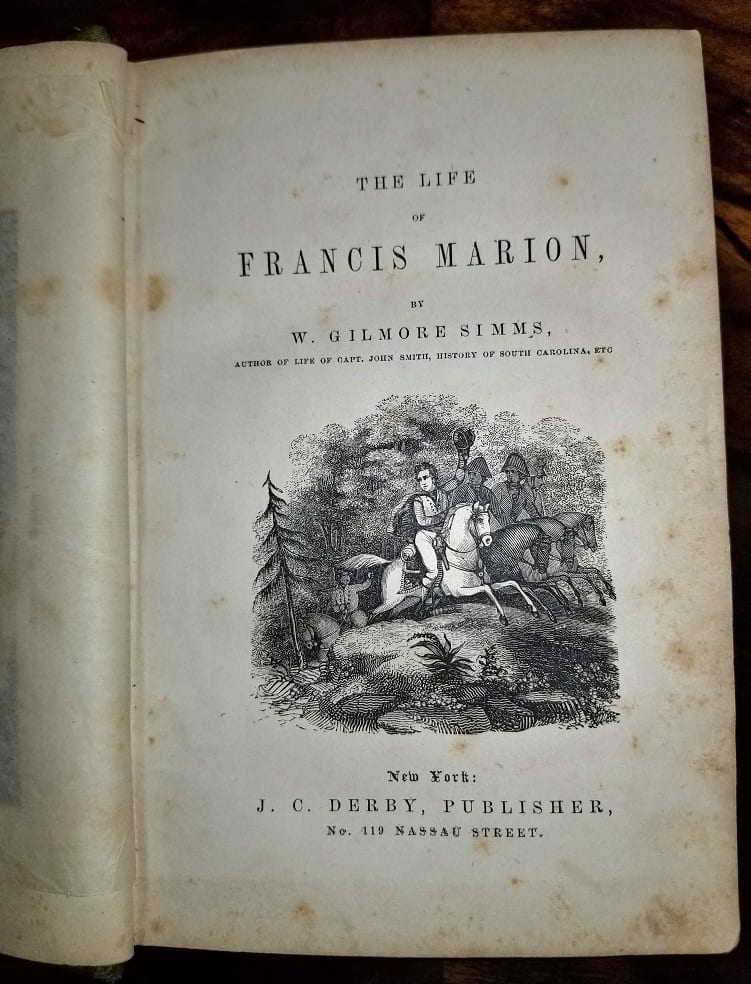 The First Edition was released in 1844.

This EXTREMELY RARE book is in fair condition with some minor fraying and wear to the green cloth cover(s) ans spine(s) , some loss of gilt work on the cover, some foxing, but otherwise good for it’s age.

It has ALL the attached illustrations.

This is a RARE Early Edition American Book !!

A significant aim throughout Simms’s work is to provide South Carolina, and the South generally, with pride of place in the emergence of the American nation, its people, and their national character.  Simms does this work largely through his narration of the Revolutionary War in South Carolina, the focus of numerous romances, histories, and other works.  One such work is The Life of Francis Marion, a biography of the legendary “Swamp Fox.”  Simms’s interest in Marion is pronounced, as the famous general appears in several of the revolutionary romances; while flawed at times, Simms’s biography was influential in shaping subsequent perceptions of Marion. .The Letters indicate that Simms was thinking of taking up the biography genre by early 1840, as he told James Lawson in April of that year that he was “meditating and taking notes for several Biographies—say Marion, Sumter, Pickens, Moultrie &c.—worthies of Carolina Revolutionary History.”  That September, he announced that he was “taking notes for my life of Green [sic] and Marion.” Though he had been quite productive in other genres in the intervening three years, by October 1843 Simms was still merely “taking notes for a new Life of Marion.”  However, he soon began writing the biography in earnest, telling Lawson in mid-November that he had contracted the work, and was to have it to the publisher by February of the following year.  Nevertheless, the biography was not completed by February, and the writer noted in March 1844 that he had “prepared 300 MS. pages of my life of Marion.  It will need 200 more.”

The work was finished sometime later that year, and a first edition was published by Henry G. Langley by November 1844.  Simms was unhappy with this edition, as it suffered from a lack of corrections and editing; he lamented to George Frederick Holmes that “I fear that this [edition of Marion that Holmes may have been reading] is the first edition which is lamentably full of errors.  Should it be so, you must not charge to my account whatever may be fairly ascribable to the printers.  Entire pages have been left uncorrected which in proof were sometimes almost rewritten.”  Despite this early frustration, this issue was soon corrected, and The Life of Francis Marion was met with praise amongst reviewers and sold well.  By late 1846, Simms had become dissatisfied with his relationship with Langley, and wanted to have Marion published by other houses.  Letters to Lawson from late 1846 and throughout 1847 show the author considering maneuvers that would force Langley to release Marion, so that the work could be published by another firm.  Simms eventually succeeded, and the biography was published by several different houses in the following years, including Geo. F. Cooledge & Brother; Phillips, Sampson & Co.; J.C. Derby; John Philbrick; Derby & Jackson; and G.G. Evans.

The Life of Francis Marion was popular and generally well-received during Simms’s life, going through at least ten editions between 1844 and 1860.  Yet, for most of the twentieth century, the work was lightly regarded; writing in 1992, Simms biographer John Caldwell Guilds notes that the work is “now all-but-forgotten.”  However, recent years have seen a resurgence in scholarly interest in Marion.  Recent scholars have rediscovered the work and begun to reconsider its merits as both an historical document and a work of literature. Steven D. Smith’s “Imagining the Swamp Fox:  William Gilmore Simms and the National Memory of Francis Marion” is perhaps the most robust recent treatment of Simms’s biography.  Smith demonstrates that Simms’s goal in writing the biography was to show Marion as a Washington-like figure who should be understood as exemplifying the best, foundational aspects of the national character, as well as to push back against the two earlier biographical treatments of Marion, by Mason Locke Weems and William Dobein James.  Smith notes that Simms “disparaged both Weems and James,” as the former misused facts about Marion’s life while the latter wrote a biography of no literary merit.  For Simms the writer, the artistic merits of an historical work were at least as important as their historicity; thus his impetus for this biography.  Despite The Life of Francis Marion being “full of Weems-like flowery speeches and James’s confusions,” Smith contends that we must understand this project by seeing “Simms as he saw himself—as a deconstructionist of Weems’s mythology but with a literary heart.”  Historian Sean Busick deems Simms’s biography a valuable historical work, since the writer preserves documentary materials, such as a now-lost memoir by Lt. Peter Horry, and oral histories that would otherwise be unavailable to contemporary scholars.  Furthermore, Busick commends the historical content of the work, noting that Marion “shows a close attention to fairness and truthfulness.  Indeed, Simms paints a far more balanced picture of the Revolution than many historians before or since.”

Francis Marion was the main inspiration behind the character of Benjamin Martin (lead) and played by Mel Gibson in the movie …”The Patriot”.