George was the last British monarch born outside Great Britain: he was born and brought up in northern Germany. His grandmother, Sophia of Hanover, became second in line to the British throne after about 50 Catholics higher in line were excluded by the Act of Settlement 1701 and the Acts of Union 1707, which restricted the succession to Protestants. After the deaths of Sophia and Anne, Queen of Great Britain, in 1714, his father George I, Elector of Hanover, inherited the British throne. In the first years of his father’s reign as king, George was associated with opposition politicians, until they re-joined the governing party in 1720.

As king from 1727, George exercised little control over British domestic policy, which was largely controlled by the Parliament of Great Britain. As elector, he spent 12 summers in Hanover, where he had more direct control over government policy. He had a difficult relationship with his eldest son, Frederick, who supported the parliamentary opposition. During the War of the Austrian Succession, George participated at the Battle of Dettingen in 1743, and thus became the last British monarch to lead an army in battle. In 1745, supporters of the Catholic claimant to the British throne, James Francis Edward Stuart (“The Old Pretender”), led by James’s son Charles Edward Stuart (“The Young Pretender” or “Bonnie Prince Charlie”), attempted and failed to depose George in the last of the Jacobite rebellions. Frederick died unexpectedly in 1751, nine years before his father, and so George II was ultimately succeeded by his grandson, George III.

For two centuries after George II’s death, history tended to view him with disdain, concentrating on his mistresses, short temper and boorishness. Since then, most scholars have re-assessed his legacy and conclude that he held and exercised influence in foreign policy and military appointments.

Thomas Chippendale (June 1718 – 1779) was born at Otley, West Riding of Yorkshire. Chippendale was a London cabinet-maker and furniture designer in the mid-Georgian, English Rococo, and Neoclassical styles. In 1754 he published a book of his designs, titled The Gentleman and Cabinet Maker’s Director, upon which success he became renowned. The designs are regarded as reflecting the current British fashion for furniture of that period and are today reproduced globally. He was buried 16 November 1779, according to the records of St Martin’s-in-the-Fields, in the cemetery since built upon by the National Gallery. Chippendale furniture is highly valued; a padouk cabinet that came up for auction by Christies in 2008 sold for £2,729,250 (USD 5,324,763)

In 1749 Chippendale rented a modest house in Conduit Court, near Covent Garden. In 1752 he moved to Somerset Court, off the Strand. In 1754 Chippendale moved to 60–62 St. Martin’s Lane in London, where for the next 60 years the family business operated until 1813 when his son, Thomas Chippendale (Junior), was evicted for bankruptcy. In 1754 he also went into partnership with James Rannie, a wealthy Scottish merchant, who put money into the business at the same time as Chippendale brought out the first edition of the Director. Rannie and his bookkeeper, Thomas Haig, probably looked after the finances of the business. His wife, Catherine, died in 1772. After James Rannie died in 1766, Thomas Haig seems to have borrowed £2,000 from Rannie’s widow, which he used to become Chippendale’s partner. One of Rannie’s executors, Henry Ferguson, became a third partner and so the business became Chippendale, Haig and Co. Thomas Chippendale (Junior) took over the business in 1776 allowing his father to retire. He moved to what was then called Lob’s Fields (now known as Derry Street) in Kensington. Chippendale married Elizabeth Davis at Fulham Parish Church on 5 August 1777. He fathered three more children. In 1779 Chippendale moved to Hoxton where he died of tuberculosis and was buried at St Martin-in-the-Fields on 16 November 1779.

Chippendale was much more than just a cabinet maker, he was an interior designer who advised on other aspects of decor such as soft furnishings and even the colour a room should be painted. At the peak of its success the firm could act like a modern interior designer working with other specialists and undertake the supply of fully decorated and furnished rooms or whole houses, once the principal construction was done. Chippendale often took on large-scale commissions from aristocratic clients. Twenty-six of these commissions have been identified.[6] Here furniture by Chippendale can still be identified, The locations include: 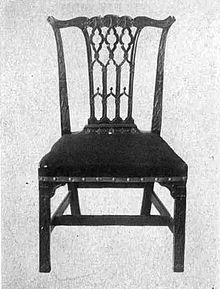 A provincial Chippendale-style chair with elaborate “Gothick” tracery splat back

Chippendale’s Director was used by many other cabinet makers. Consequently, recognisably “Chippendale” furniture was produced in Dublin, Philadelphia, Lisbon, Copenhagen and Hamburg. Catherine the Great and Louis XVI both possessed copies of the Director in its French edition.[7] The Director shows four main styles: English with deep carving, elaborate French rococo in the style of Louis XV furniture, Chinese style with latticework and lacquer, and Gothic with pointed arches, quatrefoils and fret-worked legs. His favourite wood was mahogany; in seat furniture he always used solid wood rather than veneers.

This piece was made for someone VERY WEALTHY……a Lord or Titled person !!

It is in GLORIOUS CONDITION…..IT HAS AN ABSOLUTELY GORGEOUS NATURAL PATINA consistent with its age.

It has had some minor restoration work done over the years, including the addition of a couple of metal brackets to strengthen the base and a new central support under the seat cushion. The Seat Cushion has been re-upholstered in a very fine red and gold silk fabric. Otherwise it is ORIGINAL !!

The Settee is made of the VERY BEST CUBAN MAHOGANY.

It has a STUNNING Chippendale style double back splat, curved arms and 6 support legs. The legs to the rear are plain in form but curved outwards.

The Front Legs are AMAZING !!

Each of the front legs is curved and has a classic scallop shell motif (classically Irish) as its centerpiece. The legs end in the MOST AMAZING BALL & CLAW FEET.

Each of the Front Legs has a hand-carved letter “C” underneath the scallop shell………………….THIS IS FASCINATING AND INTRIGUING TO SAY THE LEAST…………Dare we suggest that the “C” may stand for “Chippendale” ????? Is it an ‘homage’ to Chippendale seeing that it is a contemporaneous piece???

What is also highly unusual and intriguing is the fact that the central and right legs clearly have the letter “C” facing the correct way….but the left leg has the letter “C” inverted….facing away.

The piece has a GLORIOUS NATURAL PATINA throughout in the flamed mahogany.

This piece is TRULY HISTORICAL AND EXTREMELY RARE !!

IT IS ONE OF THE FINEST PIECES OF IRISH GEORGIAN FURNITURE I HAVE EVER SEEN !!!

During the ‘Celtic Tiger’ Economy in Ireland in the Late 1990’s and Early 2000’s……….this piece would EASILY have fetched a sum in the Six Figures at Auction.

Provenance: From the Private Collection of a High-End Collector whose Collection has been amassed over 30 years.

Condition: Some minor repairs to the seat base over the years but nothing significant. Re-upholstered in the last 20 years.

Category: B & I Furniture - General, B & I Sofas and Chairs, Bric a Brac, British & Irish