Curled top which we are of the opinion was for holding a pencil to write alms/prayer requestes.

Has marks but we cannot identify them but this piece is most definitely of the style and quality of Faberge.

We believe this to be an alms or prayer dish. One would write prayers on a small piece of paper, probably using a pencil that would be in the top loop, and one would leave the folded written prayer request with a financial offering to the church.

THIS IS AN EXCEPTIONAL QUALITY AND EXTREMELY RARE PIECE !!

The Russian Orthodox Church (ROC; Russian: Ру́сская правосла́вная це́рковь, tr. Rússkaya pravoslávnaya tsérkov), alternatively legally known as the Moscow Patriarchate (Russian: Моско́вский патриарха́т, tr. Moskóvskiy patriarkhát),[12] is one of the autocephalous Eastern Orthodox Christian churches. The primate of the ROC is the Patriarch of Moscow and all Rus’. The ROC, as well as its primate, officially ranks fifth in the Orthodox order of precedence, immediately below the four ancient patriarchates of the Greek Orthodox Church: Constantinople, Alexandria, Antioch, and Jerusalem.[13] As of 15 October 2018, the ROC suspended communion with the Ecumenical Patriarch of Constantinople, having unilaterally severed ties in reaction to the establishment of the Orthodox Church of Ukraine, which was finalised by the Ecumenical Patriarchate on 5 January 2019.

The Christianization of Kievan Rus’, widely seen as the birth of the ROC, is believed to have occurred in 988 through the baptism of the Rus’ prince Vladimir and his people by the clergy of the Ecumenical Patriarchate, whose constituent part the ROC remained for the next six centuries, while the Metropolitan of Kiev and all Rus’ remained in the jurisdiction of the Ecumenical Patriarchate until 1686.

The ROC currently claims exclusive jurisdiction over the Orthodox Christians, irrespective of their ethnic background, who reside in the former member republics of the Soviet Union, excluding Georgia and Armenia. Such countries as Estonia, Moldova, and Ukraine dispute this claim and have established parallel canonical Orthodox jurisdictions: the Estonian Apostolic Orthodox Church, the Metropolis of Bessarabia, and the Orthodox Church of Ukraine, respectively. The ROC also exercises ecclesiastical jurisdiction over the autonomous Church of Japan and the Orthodox Christians resident in the People’s Republic of China. The ROC branches in Belarus, Estonia, Latvia, Moldova and Ukraine since the fall of the Soviet Union in the 1990s enjoy various degrees of self-government, albeit short of the status of formal ecclesiastical autonomy.

The ROC should not be confused with the Orthodox Church in America (OCA). It has been an autocephalous Orthodox church since 1970, but it is not universally recognised in this status. The Ecumenical Patriarchate views it as a branch of the ROC. It traces its history in North America to the late 18th century, when Russian missionaries in Alaska (then part of the Russian Empire) first established churches among the Alaska Natives and other indigenous peoples.

The House of Fabergé (French pronunciation: ​[fabɛʁʒe]; Russian: Дом Фаберже) is a jewellery firm founded in 1842 in Saint Petersburg, Russia, by Gustav Faberge, using the accented name Fabergé.[1] Gustav’s sons, Peter Carl and Agathon, and grandsons followed him in running the business until it was nationalised by the Bolsheviks in 1918. The firm was famous for designing elaborate jewel-encrusted Fabergé eggs for the Russian Tsars, and for a range of other work of high quality and intricate detail. In 1924, Peter Carl’s sons Alexander and Eugène Fabergé opened Fabergé & Cie in Paris, making similar jewellery items and adding the name of the city to their rival firm’s trademark, styling it FABERGÉ, PARIS.

In 1937, the rights to the Fabergé brand name were sold to Samuel Rubin for the marketing of perfume. The brand name was then resold in 1964 to cosmetics company Rayette Inc., which changed its name to Rayette-Fabergé Inc. As the name was resold more times, Fabergé companies (such as Fabergé Inc.) launched clothing lines, the cologne Brut (which became the best-selling cologne at the time), the perfume Babe, hair products, and also undertook film production. The brand changed hands a few more times, and jewellery was eventually added back to the product lines. Next to branded Fabergé products, the world market has been continuously supplied with imitation “Fauxbergé” items and “Fabergé-style” products. Today, the brand is solely used for jewellery items and gem stones. 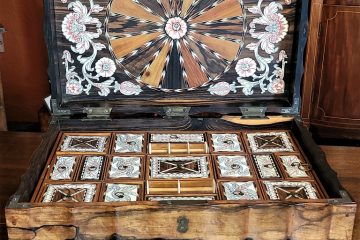 PRESENTING AN ABSOLUTELY STUNNING 19C Anglo Ceylonese Sewing Box of Museum Quality. Made in Ceylon (now Sri Lanka) circa 1860, this is one of the FINEST sewing boxes of it’s kind that we have EVER Read more… 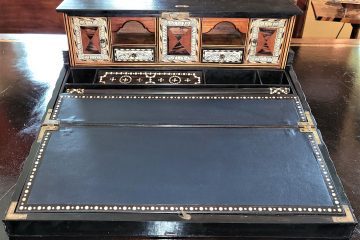 PRESENTING AN ABSOLUTELY FANTASTIC 19C Anglo Ceylonese Lap Desk of Museum Quality. We can safely say that this is one of the FINEST lap desks we have ever seen ! The Lap desk box is Read more… 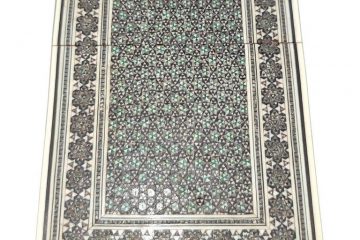 PRESENTING A SUPERB 19C Anglo Indian Sadeli Mosaic Greeting Card Case. Made in or around Bombay, India circa 1880. This is a Greeting Card Case used for holding your greeting cards or business cards of Read more…