PRESENTING a STUNNING and VERY RARE French Porcelain Tea and Chocolate Service from circa 1820.

This Set or Service consists of a complete 11 place service of white and gold porcelain by Vieux Paris or more commonly known as Old Paris Porcelain.

What TRULY ELEVATES this service is the various hand-painted scenes on each piece.

The Set consists of: 11 cups and saucers, A Lidded Sugar Urn, A Lidded Tea Pot, A Lidded Hot Chocolate Pot, A Creamer Jug.

The artist is unknown.

French porcelain has a history spanning a period from the 17th century to the present.

France finally discovered the Chinese technique of hard-paste porcelain through the efforts of the Jesuit Father François Xavier d’Entrecolles between 1712 and 1722.[10] The letters sent to Father Orry in Paris were first published by Jean-Baptiste Du Halde in 1735, with English editions appearing in 1736 or 1738.[11] The letters were later again published by Abbé Jean-Baptiste Grosier in his General Description of China.[12] D’Entrecolles also sent material specimens to Europe, which were analysed by Réaumur, and led to the establishment of the Sèvres Manufactory once equivalent materials were found in Europe.[12] 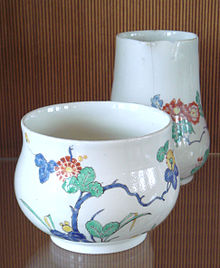 After 1730, polychrome porcelain also came to be produced, often in imitation of Chinese polychrome styles of porcelain, such as the “Famille rose” types. The Japanese Kakiemon style of Arita porcelain, Japan, known as “Fleurs indiennes” (“Flowers of the Indies”) was also used as an inspiration, especially in Saint-Cloud porcelain and Chantilly porcelain. A patent granted to the Chantilly factory in 1735 by Louis XV specifically describes the right to make porcelain façon de Japon (“in imitation of the porcelain of Japan”).[13]

PROVENANCE: This piece is part of a Dallas Private Collection.

Condition: Overall in VERY GOOD condition for it’s age. Some loss of gilding especially on the saucers….but cups, pots, etc in SUPER condition.One minor chip to the rim of the sugar pot.