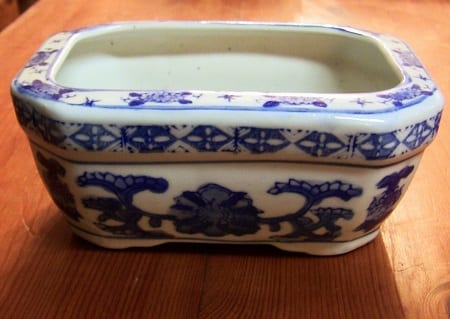 This is a Chinese pottery blue and white open box or mini planter. CHINESE CERAMICS: Chinese ceramic ware shows a continuous development since imperial times and is one of the most significant forms of Chinese art and ceramics. The first types of ceramics were made during the Palaeolithic era. Chinese ceramics range from construction materials such as bricks and tiles, to hand-built pottery vessels fired in bonfires or kilns, to the sophisticated Chinese porcelain wares made for the imperial court. Porcelain is so identified with China that it is still called “china” in everyday English usage.

Most later Chinese ceramics, even of the finest quality, were made on an industrial scale, thus few names of individual potters were recorded. Many of the most renowned workshops were owned by or reserved for the Emperor, and large quantities of ceramics were exported as diplomatic gifts or for trade from an early date.

Following in the tradition of earlier qingbai porcelains, blue and white wares are glazed using a transparent porcelain glaze. The blue decoration is painted onto the body of the porcelain before glazing, using very finely ground cobalt oxide mixed with water. After the decoration has been applied the pieces are glazed and fired.

It is believed that underglaze blue and white porcelain was first made in the Tang dynasty. Only three complete pieces of Tang blue and white porcelain are known to exist (in Singapore from the Indonesian Belitung shipwreck), but shards dating to the 8th or 9th century have been unearthed at Yangzhou in Jiangsu Province. It has been suggested that the shards originated from a kiln in the province of Henan. In 1957, excavations at the site of a pagoda in the province Zhejiang uncovered a Northern Song bowl decorated with underglaze blue and further fragments have since been discovered at the same site. In 1970, a small fragment of a blue and white bowl, again dated to the 11th century, was also excavated in the province of Zhejiang.

Starting early in the 14th century, blue and white porcelain rapidly became the main product of Jingdezhen, reaching the height of its technical excellence during the later years of the reign of the Kangxi Emperor[44] and continuing in present times to be an important product of the city.

The tea caddy illustrated shows many of the characteristics of blue and white porcelain produced during the Kangxi period. The translucent body showing through the clear glaze is of great whiteness and the cobalt decoration, applied in many layers, has a fine blue hue. The decoration, a sage in a landscape of lakes and mountains with blazed rocks is typical of the period. The piece would have been fired in a saggar (a lidded ceramic box intended to protect the piece from kiln debris, smoke and cinders during firing) in a reducing atmosphere in a wood-burning egg-shaped kiln, at a temperature approaching 1,350 °C (2,460 °F).

Distinctive blue-and-white porcelain was exported to Japan where it is known as Tenkei blue-and-white ware or ko sometsukei. This ware is thought to have been especially ordered by tea masters for Japanese ceremony.