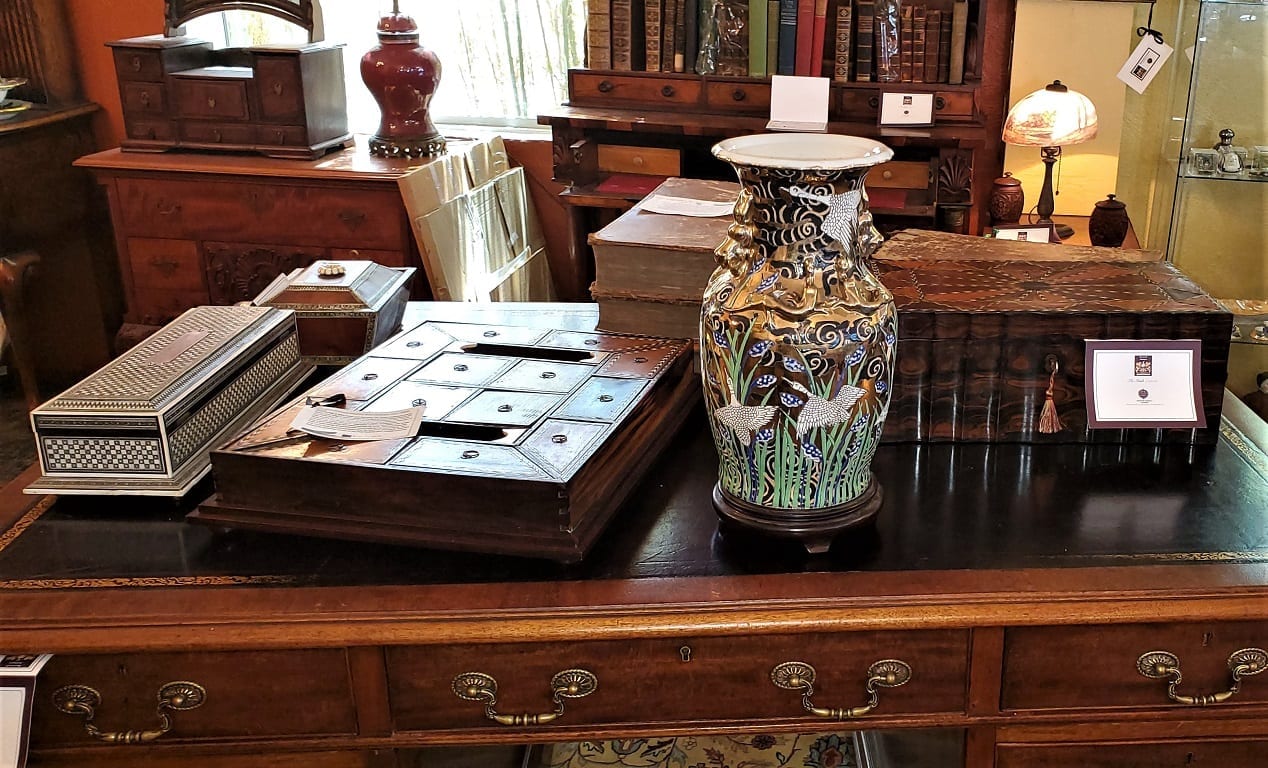 Has a sticker on the base to indicate it was made in Macao.

In the Qianglong Style with marks.

The vase is in near mint condition. It is white porcelain which has been entirely gilted on the exterior and has stylized enameled and hand painted circular black and white ‘squiggles’, white cranes in flight and foliage with blue orchids.

Gilt Beaver handles on either side and gilt lizards on front and back .

It sits on a wooden stand but we do not think it is original to the piece.

It is a very PRETTY and DECORATIVE piece !

Macau comprises a small, narrow peninsula projecting from the mainland province of Guangdong and the two islands of Taipa and Coloane. Extending up a hillside is the city of Macau, which occupies almost the entire peninsula. The name Macau, or Macau (Pinyin: Aomen; Wade-Giles: Ao-men), is derived from the Chinese Ama-gao or ‘Bay of Ama’, the patron goddess of sailors.

The first Europeans to arrive at the coast of China was the Portuguese. The first ship anchored in the Pearl River estuary in 1513, and further Portuguese visits followed regularly. Trade with China commenced in 1553. Four years later Portuguese paying tribute to China settled in Macau, which became the official and principal entrepôt for all international trade with China and Japan and an intermediary port for ships traveling from Lisbon to Nagasaki (at the time, Japan’s only outport for trade).

Missionaries arriving on Portuguese ships turned Macau into an East Asian center of Christianity. Even though China’s trade with the outside world was gradually centralized in Guangzhou (Canton) toward the end of the 18th century, merchants were allowed into Guangzhou only during the trading season – from November to May – and the international merchant community established itself at Macau.

By the mid-19th century the British colony of Hong Kong had surpassed Macau in trade, and within a few years the merchants had largely deserted the Portuguese possession, which never again was a major entrepôt.

In the 1930s and ’40s Macau, declared a neutral territory during the Sino-Japanese War and World War II, became a refuge for both Chinese and Europeans.

The Chinese population in the territory continued to grow when the communist government assumed power in China in 1949.

In April 1987 Portugal and China reached an agreement to return Macau to Chinese rule in 1999. On Dec. 20, 1999, Macau became a special administrative region under Chinese sovereignty.

There are few natural resources, an exception being fish in the Pearl River estuary, which are used for local needs. Much of Macau’s imports consist of raw materials or semifinished goods for manufacturing purposes. One of these goods were whole or partially undecorated porcelain blanks onto which local companies added enamel decorations. These porcelain blanks appears to have been manufactured at various locations in mainland China, of which Jingdezhen in Jiangxi province can have been one however, the porcelain wares often seems to look different than the typical Jingdezhen wares. The polychrome porcelain industry once ranked fifth among Macau’s industrial exports.

The first polychrome porcelain production in Macau started in 1950. With no substantial increase of the porcelain export during the 1960s, in 1970s the porcelain export started to grow 45% annually, from about 5 million MOP$ (Patacas) per year until it reached about 26 million MOP$ (Patacas) in 1979. One important reason for this was the increase in property value in nearby Hong Kong that gradually pushed out the labor intensive porcelain workshops to less expensive land, which was found in Macau, that was also politically stable still under Portuguese rule.

During 1980 to 1986 the porcelain export continued to grow but slower, by 23,5 percent annually. In 1987 Macau Ceramic exports topped the one hundred million Yuan mark until in reached its highest point in 1988 after that the export had increased a further 18.7% over 1987.

In 1981 Macau had more than 40 polychrome porcelain factories, employing a total of nearly 2,000 people. The last few decades had seen many small factories closing shop or becoming absorbed by other firms so that by the mid-1980s, fewer factories than before produced more decorated porcelain than ever. output.

Provenance: From a Private Dallas Estate.