This Volume is Volume II which contains Shakespeare’s Tragedies………the most sought after.

The Book is bound in burgundy Moroccan Leather with gilded decoration, and gilded edges.

This is the Imperial Edition of the ‘Works of Shakespere’ …. edited by Charles Knight with a large number of Engravings on Steel, contained in the Book.

The Engravings are by:

This particular version is EXTREMELY RARE.

You will note the deliberate misspelling of the surname “Shakespere” (instead of “Shakespeare”). This was done on purpose as in the mid-19th Century it had become common to spell the name that way. It was also a ‘whimsical’ move by the publishers.

William Shakespeare (/ˈʃeɪkspɪər/;[1] 26 April 1564 (baptised) – 23 April 1616)[nb 1] was an English poet, playwright, and actor, widely regarded as the greatest writer in the English language and the world’s pre-eminent dramatist.[2] He is often called England’s national poet, and the “Bard of Avon”.[3][nb 2] His extant works, including collaborations, consist of approximately 38 plays,[nb 3] 154 sonnets, two long narrative poems, and a few other verses, some of uncertain authorship. His plays have been translated into every major living language and are performed more often than those of any other playwright.[4]

Shakespeare was born and brought up in Stratford-upon-Avon, Warwickshire. At the age of 18, he married Anne Hathaway, with whom he had three children: Susanna, and twins Hamnet and Judith. Sometime between 1585 and 1592, he began a successful career in London as an actor, writer, and part-owner of a playing company called the Lord Chamberlain’s Men, later known as the King’s Men. He appears to have retired to Stratford around 1613, at age 49, where he died three years later. Few records of Shakespeare’s private life survive, which has stimulated considerable speculation about such matters as his physical appearance, sexuality, and religious beliefs and whether the works attributed to him were written by others.[5]

Shakespeare produced most of his known work between 1589 and 1613.[6][nb 4] His early plays were primarily comedies and histories, and these are regarded as some of the best work ever produced in these genres. He then wrote mainly tragedies until about 1608, including Hamlet, Othello, King Lear, and Macbeth, considered some of the finest works in the English language.[2] In his last phase, he wrote tragicomedies, also known as romances, and collaborated with other playwrights.

Many of his plays were published in editions of varying quality and accuracy during his lifetime. In 1623, however, John Heminges and Henry Condell, two friends and fellow actors of Shakespeare, published a more definitive text known as the First Folio, a posthumous collected edition of his dramatic works that included all but two of the plays now recognised as Shakespeare’s.[7] It was prefaced with a poem by Ben Jonson, in which Shakespeare is hailed, presciently, as “not of an age, but for all time”.[7]

In the 20th and 21st centuries, his works have been repeatedly adapted and rediscovered by new movements in scholarship and performance. His plays remain highly popular, and are constantly studied, performed, and reinterpreted in diverse cultural and political contexts throughout the world.

Most playwrights of the period typically collaborated with others at some point, and critics agree that Shakespeare did the same, mostly early and late in his career.[85] Some attributions, such as Titus Andronicus and the early history plays, remain controversial, while The Two Noble Kinsmen and the lost Cardenio have well-attested contemporary documentation. Textual evidence also supports the view that several of the plays were revised by other writers after their original composition.

The first recorded works of Shakespeare are Richard III and the three parts of Henry VI, written in the early 1590s during a vogue for historical drama. Shakespeare’s plays are difficult to date, however,[86] and studies of the texts suggest that Titus Andronicus, The Comedy of Errors, The Taming of the Shrew and The Two Gentlemen of Verona may also belong to Shakespeare’s earliest period.[87] His first histories, which draw heavily on the 1587 edition of Raphael Holinshed’s Chronicles of England, Scotland, and Ireland,[88] dramatise the destructive results of weak or corrupt rule and have been interpreted as a justification for the origins of the Tudor dynasty.[89] The early plays were influenced by the works of other Elizabethan dramatists, especially Thomas Kyd and Christopher Marlowe, by the traditions of medieval drama, and by the plays of Seneca.[90] The Comedy of Errors was also based on classical models, but no source for The Taming of the Shrew has been found, though it is related to a separate play of the same name and may have derived from a folk story.[91] Like The Two Gentlemen of Verona, in which two friends appear to approve of rape,[92] the Shrew’s story of the taming of a woman’s independent spirit by a man sometimes troubles modern critics and directors.[93] 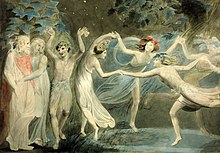 Shakespeare’s early classical and Italianate comedies, containing tight double plots and precise comic sequences, give way in the mid-1590s to the romantic atmosphere of his most acclaimed comedies.[94] A Midsummer Night’s Dream is a witty mixture of romance, fairy magic, and comic lowlife scenes.[95] Shakespeare’s next comedy, the equally romantic Merchant of Venice, contains a portrayal of the vengeful Jewish moneylender Shylock, which reflects Elizabethan views but may appear derogatory to modern audiences.[96] The wit and wordplay of Much Ado About Nothing,[97] the charming rural setting of As You Like It, and the lively merrymaking of Twelfth Night complete Shakespeare’s sequence of great comedies.[98] After the lyrical Richard II, written almost entirely in verse, Shakespeare introduced prose comedy into the histories of the late 1590s, Henry IV, parts 1 and 2, and Henry V. His characters become more complex and tender as he switches deftly between comic and serious scenes, prose and poetry, and achieves the narrative variety of his mature work.[99] This period begins and ends with two tragedies: Romeo and Juliet, the famous romantic tragedy of sexually charged adolescence, love, and death;[100] and Julius Caesar—based on Sir Thomas North‘s 1579 translation of Plutarch‘s Parallel Lives—which introduced a new kind of drama.[101] According to Shakespearean scholar James Shapiro, in Julius Caesar “the various strands of politics, character, inwardness, contemporary events, even Shakespeare’s own reflections on the act of writing, began to infuse each other”.[102] 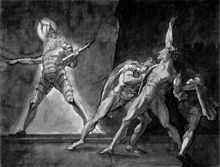 In the early 17th century, Shakespeare wrote the so-called “problem plays” Measure for Measure, Troilus and Cressida, and All’s Well That Ends Well and a number of his best-known tragedies.[103] Many critics believe that Shakespeare’s greatest tragedies represent the peak of his art. The titular hero of one of Shakespeare’s most famous tragedies, Hamlet, has probably been discussed more than any other Shakespearean character, especially for his famous soliloquy which begins “To be or not to be; that is the question“.[104] Unlike the introverted Hamlet, whose fatal flaw is hesitation, the heroes of the tragedies that followed, Othello and King Lear, are undone by hasty errors of judgement.[105] The plots of Shakespeare’s tragedies often hinge on such fatal errors or flaws, which overturn order and destroy the hero and those he loves.[106] In Othello, the villain Iago stokes Othello’s sexual jealousy to the point where he murders the innocent wife who loves him.[107] In King Lear, the old king commits the tragic error of giving up his powers, initiating the events which lead to the torture and blinding of the Earl of Gloucester and the murder of Lear’s youngest daughter Cordelia. According to the critic Frank Kermode, “the play offers neither its good characters nor its audience any relief from its cruelty”.[108] In Macbeth, the shortest and most compressed of Shakespeare’s tragedies,[109] uncontrollable ambition incites Macbeth and his wife, Lady Macbeth, to murder the rightful king and usurp the throne until their own guilt destroys them in turn.[110] In this play, Shakespeare adds a supernatural element to the tragic structure. His last major tragedies, Antony and Cleopatra and Coriolanus, contain some of Shakespeare’s finest poetry and were considered his most successful tragedies by the poet and critic T. S. Eliot.[111]

In his final period, Shakespeare turned to romance or tragicomedy and completed three more major plays: Cymbeline, The Winter’s Tale and The Tempest, as well as the collaboration, Pericles, Prince of Tyre. Less bleak than the tragedies, these four plays are graver in tone than the comedies of the 1590s, but they end with reconciliation and the forgiveness of potentially tragic errors.[112] Some commentators have seen this change in mood as evidence of a more serene view of life on Shakespeare’s part, but it may merely reflect the theatrical fashion of the day.[113] Shakespeare collaborated on two further surviving plays, Henry VIII and The Two Noble Kinsmen, probably with John Fletcher

Provenance: Bought Privately from a Collector in the UK 25 years ago.

Condition: Some scuffing and fraying to the edges of the book binding. The front cover is loose from the central spine. Minor foxing on some pages, but not bad.

Overall in pretty good condition for its age.