19C Pair of French Gilt Metal Photo Frames by Beatrice from circa 1890.

Hinged stand to the rear. Beautifully cast in floral designs with large flower on the top and clam shaped petal to the center base. 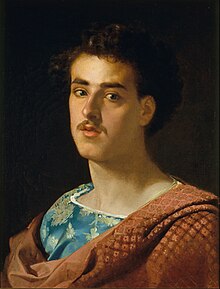 Mariano Fortuny, The Choice of a Model, 1874. Oil on canvas

According to a publication by Caroline Ingra,[10] Italian artists came to Paris during the Second Empire in search for artistic opportunities. Rome remained the center for young artists wanting to study classical tradition but not for artists who wanted to study contemporary art. They adapted the fashionable revival of eighteenth-century rococo genre painting. The fame and recognition of these Italian artists of Spanish origin and based primarily on the work of Mariano Fortuny.

Paris represented the latest in modern artistic development and attracted many artists. Fortuny attracted an audience in Paris upon first appearance in 1860. His work had a resemblance to 18th century paintings by Antoine Watteau and Jean-Honoré Fragonard. The late Second Empire patrons were most interested in Fortuny’s revival of 18th century genre painting.[11]

Fortuny’s rococo-revival imagery was especially appealing to the French audience during the last years of the Second Empire.[12] During this period, a major revival interest was seen in 18th century Paris and genre painting that was practiced by academic artists. For the increasing bourgeois audience, the rococo-revival paintings presented an optimistic outlook on life and were appropriate to the new Parisian ‘nobility’ of the late Second Empire.

Ingra notes that, “The vogue for rococo imagery [during the Second Empire] however, represented more than a shift in patronage and, consequently, taste. The interest in prerevolutionary art was part of the efforts of Second Empire officialdom to establish legitimacy for itself by connecting with a period when royalty was as yet unchallenged.” [13] She continues by asserting, “Reviving this early regime was a means of flattering themselves and emphasizing their own imperialist claims, in hope of achieving the awe and respect of the populace supposedly enjoyed by the former regime.” [14]

The Second Empire was interested in reviving rococo art as a means to regenerate the ideals and values of the old regime. It was a means to emphasize pride, power, and respect in hopes of achieving admiration and devotion enjoyed by the former regime. However, some contemporary figures were appalled and considered that the exploitation of rococo revival by Italian artists was an inferior body of work. Critics saw this new manner of painting as vapid and without style.

The French State sought to promote patrimony following its defeat in Franco-Prussian War. Late 19th-century France heavily invested in rococo style as a means to regenerate national pride and heritage.

Art Nouveau (French pronunciation: [aʁ nuvo], Anglicised to /ˈɑːrt nuːˈvoʊ/; Austria. Sezession or Secessionsstil, Catalan Modernisme, Czech Secese, English Modern Style, Germany Jugendstil or Reformstil, Italian also Stile Floreale or Liberty, Slovak Secesia, Russian Модерн [Modern]) or Jugendstil is an international philosophy[1] and style of art, architecture and applied art – especially the decorative arts – that was most popular during 1890–1910.[2] English uses the French name Art Nouveau (“new art”), but the style has many different names in other countries. A reaction to academic art of the 19th century, it was inspired by natural forms and structures, not only in flowers and plants, but also in curved lines. Architects tried to harmonize with the natural environment.[3]

Art Nouveau is considered a “total” art style, embracing architecture, graphic art, interior design, and most of the decorative arts including jewellery, furniture, textiles, household silver and other utensils and lighting, as well as the fine arts. According to the philosophy of the style, art should be a way of life. For many well-off Europeans, it was possible to live in an art nouveau-inspired house with art nouveau furniture, silverware, fabrics, ceramics including tableware, jewellery, cigarette cases, etc. Artists desired to combine the fine arts and applied arts, even for utilitarian objects.[3]

Although Art Nouveau was replaced by 20th-century Modernist styles,[4] it is now considered as an important transition between the eclectic historic revival styles of the 19th century and Modernism.