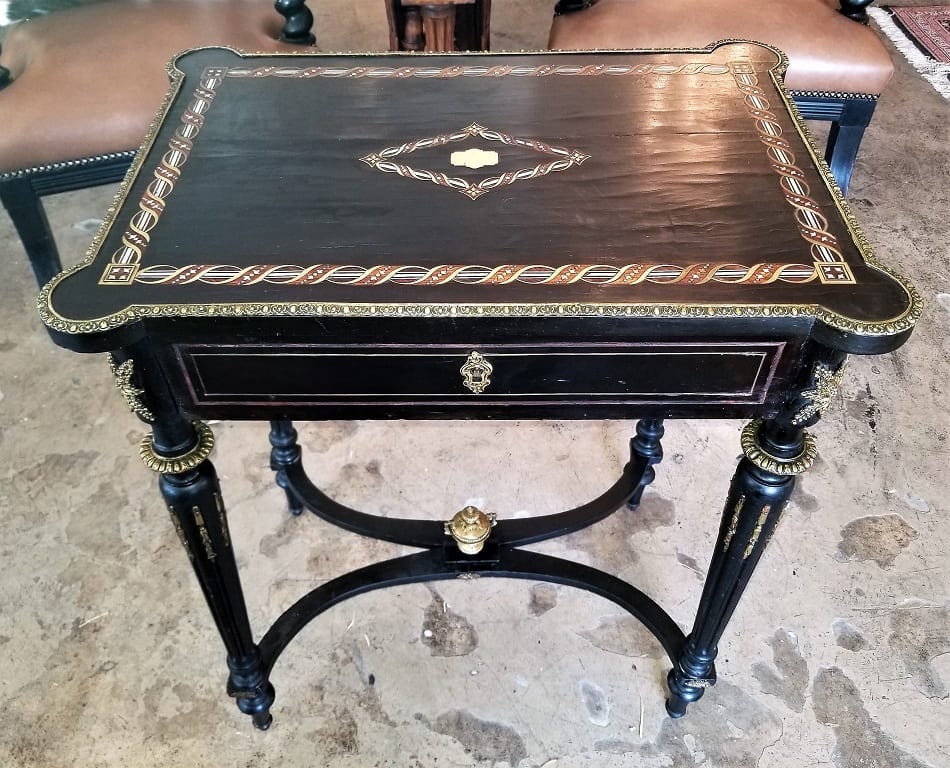 Not many of these EXCEPTIONAL Tables have survived and even fewer with the QUALITY of this one !

Made circa 1860 during the Reign of Emperor Napoleon III.

Made of Ebony, with inlaid brass, ormolu mounts, light walnut inlay, abalone and mother of pearl.

The top is simply GORGEOUS !

It has a barley twist design on the border, consisting of inlaid brass, light walnut, abalone and mother of pearl.

The central medallion is similarly inlaid and has an un-engraved brass armorial plaque.

The edge of the top is ormolu brass with indented decoration and it has curved corners.

The top lifts to reveal a mirror on the rear side of the lid (the original mirror encased in ormolu frame).

The interior is walnut. The lock, clasp and hinges are of the highest quality with floral engraving.

The front drawer pulls forward and has a re-moveable walnut tray for make-up accessories.

The top of each leg has a star shaped ormolu mount and the turned legs extend downwards to an ormolu disc on the top, wreath swags inserted ion all sides of the fluted legs.

The legs are supported by a double ‘U’ shaped central support that meetes in the middle with a cast brass ormolu lidded urn as it’s center piece.

The piece has some minor condition issues due to it;s age and delicacy. The top has evidence of ‘cracking’ to the ebony veneer but no losses. There are some minor losses of the brass inlay but nothing significant. Some of the brass stringing on the front drawer and sides has been replaced by stained wood. The piece is slightly unsteady when opened due to the weight of the mirror and lid (especially with no weight of items in the drawer). This is probably the reason why so few of these have survived. They would fall over if not counterbalanced by weight inside the table/drawer.

Napoleon III (born Charles-Louis Napoléon Bonaparte; 20 April 1808 – 9 January 1873), the nephew of Napoleon I, was the first elected President of France from 1848 to 1852. When he could not constitutionally be re-elected, he seized power in 1851 and became the Emperor of the French from 1852 to 1870. He founded the Second French Empire and was its only emperor until the defeat of the French army and his capture by Prussia and its allies in the Franco-Prussian War in 1870. He worked to modernize the French economy, rebuilt the center of Paris, expanded the overseas empire, and engaged in the Crimean War and the Second Italian War of Independence.

Napoleon III commissioned the grand reconstruction of Paris, carried out by his prefect of the Seine, Baron Haussmann. He launched similar public works projects in Marseille, Lyon and other French cities. Napoleon III modernized the French banking system, greatly expanded and consolidated the French railway system and made the French merchant marine the second largest in the world. He promoted the building of the Suez Canal and established modern agriculture, which ended famines in France and made France an agricultural exporter. Napoleon III negotiated the 1860 Cobden–Chevalier free trade agreement with Britain and similar agreements with France’s other European trading partners. Social reforms included giving French workers the right to strike and the right to organize. The first women students were admitted at the Sorbonne, and women’s education greatly expanded as did the list of required subjects in public schools.

In foreign policy, Napoleon III aimed to reassert French influence in Europe and around the world. He was a supporter of popular sovereignty and of nationalism. In Europe, he allied with Britain and defeated Russia in the Crimean War (1853–56). His regime assisted Italian unification by defeating the Austrian Empire in the Franco-Austrian War, and as its deferred reward later annexed Savoy and the County of Nice. At the same time, his forces defended the Papal States against annexation by Italy. Napoleon III doubled the area of the French overseas empire in Asia, the Pacific and Africa, however his army’s intervention in Mexico, which aimed to create a Second Mexican Empire under French protection, ended in total failure.

From 1866, Napoleon had to face the mounting power of Prussia as its Chancellor Otto von Bismarck sought German unification under Prussian leadership. In July 1870, Napoleon entered the Franco-Prussian War without allies and with inferior military forces. The French army was rapidly defeated and Napoleon III was captured at the Battle of Sedan. The Third Republic was proclaimed in Paris and Napoleon went into exile in England, where he died in 1873.