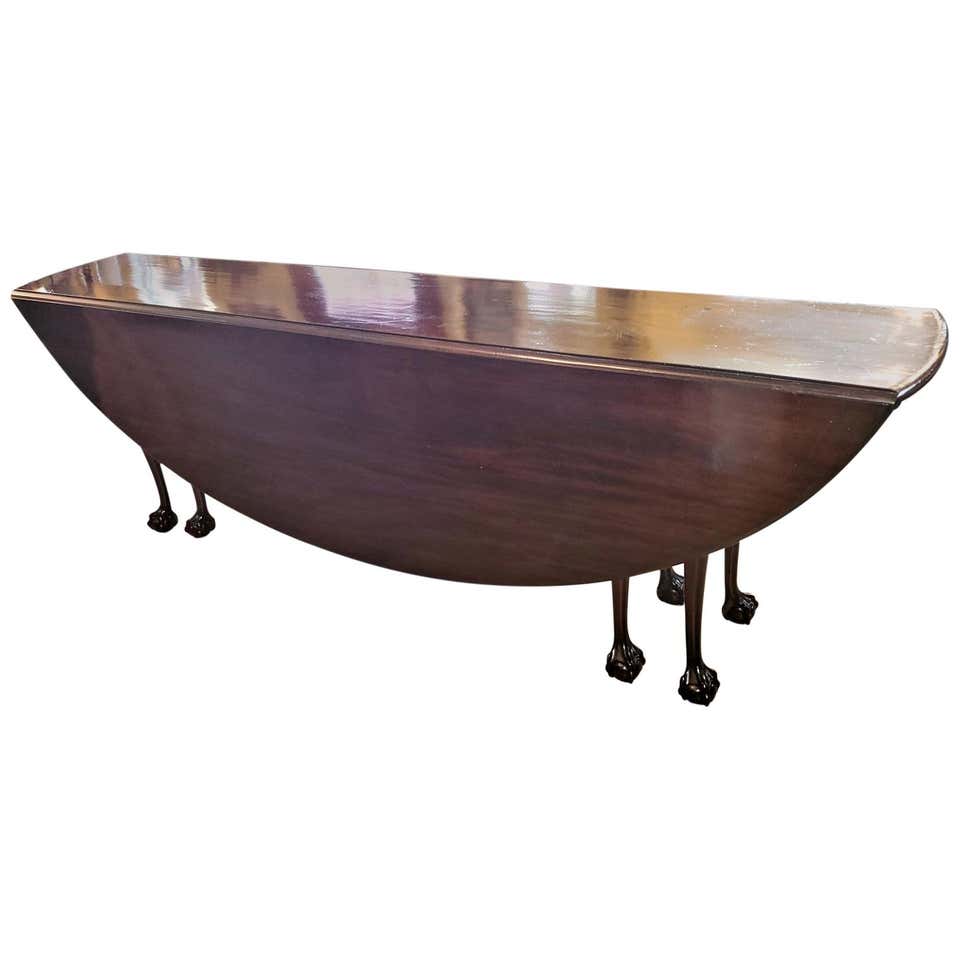 This table was made in the late 18th or very early 19th Century circa 1790-1800 (George III/Regency Era), and is made of solid mahogany and sits on 8 legs with EXCEPTIONALLY CARVED ball and claw feet.

Oval in shape …. it would comfortably seat 8 people.

This is a ‘Hunt’ Table and not to be confused with an Irish ‘Wake’ Table.

This table is obviously a ‘hunt’ table because: (1) It is made of mahogany (2) the central section is not wide enough to safely hold at coffin at rest (3) the ball and claw feet are rarely found on wake tables as they would be too ornate for the poor Irish folk.

We are of the opinion that this table would have belonged to a ‘noble household’…..a Lord or Earl or Duke …. a Manor Home or Estate, as the quality of the carving of the ball and claw feet is of the absolute highest quality. It is a BEAUTIFUL EXAMPLE of it’s kind and it is very RARE to find one of this QUALITY !

Fox hunting is an activity involving the tracking, chase and, if caught, the killing of a fox, traditionally a red fox, by trained foxhounds or other scent hounds, and a group of unarmed followers led by a “master of foxhounds” (“master of hounds”), who follow the hounds on foot or on horseback.[1]

Fox hunting with hounds, as a formalised activity, originated in England in the sixteenth century, in a form very similar to that practised until February 2005, when a law banning the activity in England and Wales came into force.

Many Greek- and Roman- influenced countries have long traditions of hunting with hounds. Hunting with Agassaei hounds was popular in Celtic Britain, even before the Romans arrived, introducing the Castorian and Fulpine hound breeds which they used to hunt.[10] Norman hunting traditions were brought to Britain when William the Conqueror arrived, along with the Gascon and Talbot hounds.

Foxes were referred to as beasts of the chase by medieval times, along with the red deer (hart & hind), martens, and roes,[11] but the earliest known attempt to hunt a fox with hounds was in Norfolk, England, in 1534, where farmers began chasing foxes down with their dogs for the purpose of pest control.[10] The last wolf in England was killed in the early 16th century during the reign of Henry VII, leaving the English fox with no threat from larger predators. The first use of packs specifically trained to hunt foxes was in the late 1600s, with the oldest fox hunt being, probably, the Bilsdale in Yorkshire.[12]

By the end of the seventeenth century, deer hunting was in decline. The Inclosure Acts brought fences to separate formerly open land into many smaller fields, deer forests were being cut down, and arable land was increasing.[13] With the onset of the Industrial Revolution, people began to move out of the country and into towns and cities to find work. Roads, railway lines, and canals all split hunting countries,[14] but at the same time they made hunting accessible to more people. Shotguns were improved during the nineteenth century and the shooting of gamebirds became more popular.[13] Fox hunting developed further in the eighteenth century when Hugo Meynell developed breeds of hound and horse to address the new geography of rural England.[13]

In Germany, hunting with hounds (which tended to be deer or boar hunting) was first banned on the initiative of Hermann Göring on July 3, 1934.[15] In 1939, the ban was extended to cover Austria after Germany’s annexation of the country. Bernd Ergert, the director of Germany’s hunting museum in Munich, said of the ban, “The aristocrats were understandably furious, but they could do nothing about the ban given the totalitarian nature of the regime.”

Condition: Overall in VERY GOOD condition for its age. One or two minor cracks on the top, at end of the central section and a couple of water rings. The legs are good but slightly loose. Original condition with no evidence of any major recent restoration work (save the hinge screws which look like replacements).