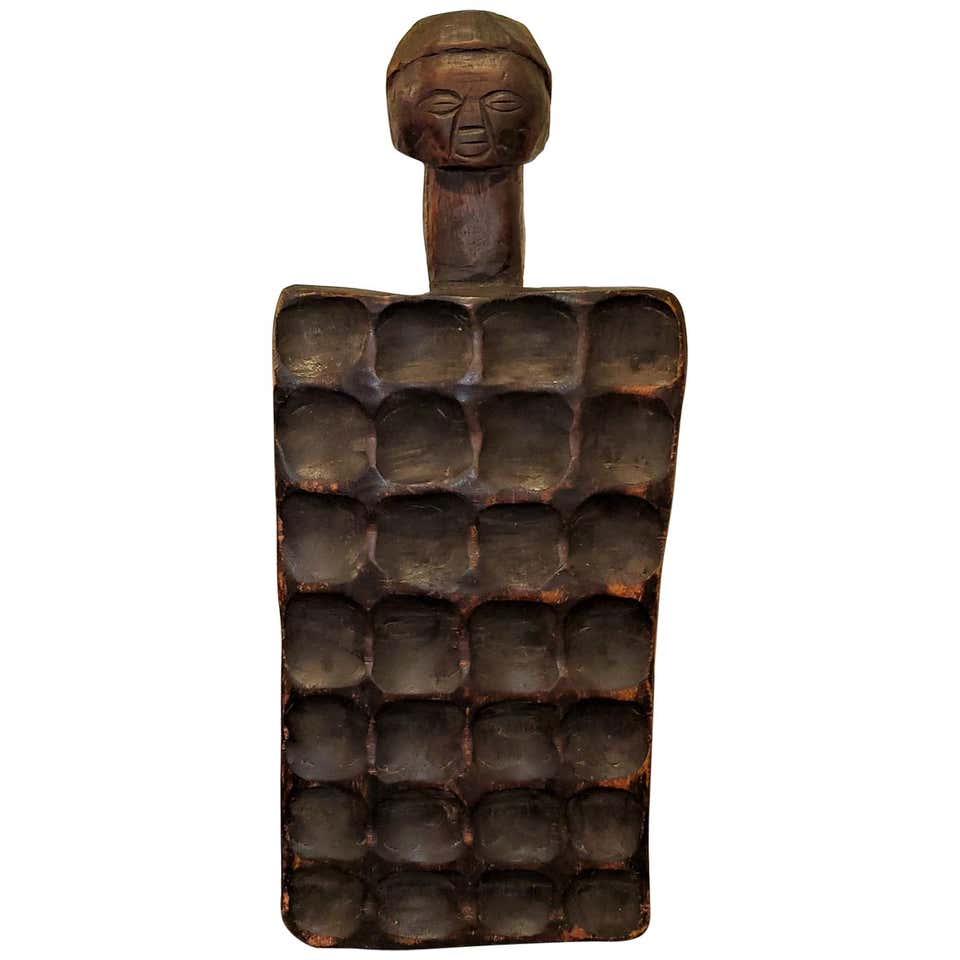 Made in the Congo in the early 20th Century.

It features a carved warriors head on the handle and the main body has a number (28) of half circle bowls for the purpose of playing a traditional Congolese board game….. Bao (see below).

Acquired by a Private Dallas Collector whilst on safari to the Congo and West Africa in the 1970’s.

Bao is a traditional mancala board game played in most of East Africa including Kenya, Tanzania, Comoros, Malawi, as well as some areas of DR Congo and Burundi. It is most popular among the Swahili people of Tanzania and Kenya; the name itself “Bao” is the Swahili word for “board” or “board game”. In Tanzania, and especially Zanzibar, a “bao master” (called bingwa, “master”; but also fundi, “artist”) is held in high respect. In Malawi, a close variant of the game is known as Bawo, which is the Yao equivalent of the Swahili name.

Bao is well known to be a prominent mancala in terms of complexity and strategical depth, and it has raised interest in scholars of several disciplines, including game theory, complexity theory, and psychology. Official tournaments are held in Tanzania, Zanzibar, Lamu (Kenya), and Malawi, and both mainland Tanzania and Zanzibar have their Bao societies, such as the Chama cha Bao founded in 1966.

In Zanzibar and Tanzania there are two versions of Bao. The main version, which is also the most complex and most appreciated, is called Bao la kiswahili (“Bao of the Swahili people”). The simplified version is called Bao la kujifunza (“Bao for beginners”). There are a variety of other mancalas across East Africa (and part of the Middle East) that are related to Bao. One of them is the Hawalis game of Oman; it is also known in Zanzibar, where it goes by the name “Bao la kiarabu” (“Bao of the Arabs”). Another major relative of Bao is Omweso (played in Uganda), which employs an equipment similar to Bao, and has some similar rules.

As with most traditional mancalas, precise historical information on the origins and diffusion of Bao is missing. Early accounts and archaeological findings are arguable as there are many games that are similar to Bao in both equipment and rules. For example, a 1658 account by French governor Étienne de Flacourt about a game played by the Sakalava people in northwestern Madagascar is sometimes quoted as the earliest reference to Bao, but scholars are more cautious about identifying Flacourt’s game with Bao proper.[4] The study of archaeological findings of boards usually relies on the assumption that boards having a square hole in a certain position (that of the nyumba, see below) are associated to Bao, as it is the only known mancala to have such feature. Nevertheless, as traditional boards are made of wood, ancient evidence of the game of Bao is unlikely to be found. As of today, the oldest Bao board is supposed to be one from Malawi, exposed at the British Museum, and dating back to no earlier than 1896. One of the first written accounts of Bao as played in the Swahili world is due to British orientalist Thomas Hyde, who saw it played in 1658 in Anjouan (Comoros).

Due to its strong relationship with Swahili culture, and despite the lack of historical evidences, it is reasonable to assume that Bao originally spread from the Swahili coast (i.e., the coast Tanzania and Kenya, and their islands). It is also notable that “Bao la kiswahili” means “swahili board game” as opposed to, for example, “Bao la kiarabu” (the related “arab board game”, also known as Hawalis). In the 1820s, Swahili poet Muyaka bin Haji from Mombasa celebrated the game in his poem Bao Naligwa.