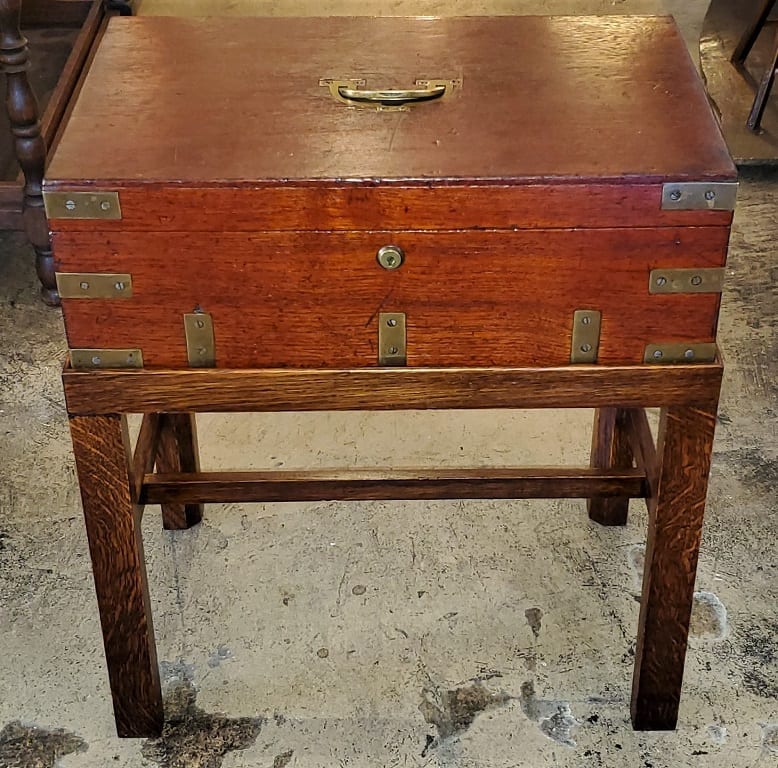 Perfect as a side table for a sofa or just for use as a side cabinet for storage.

The box sits on to the stand and lifts off. The stand is of more recent (later) construction and is made of tiger oak but it has a very nice patina and is very nicely made. It probably was made at the beginning of the 20th Century, circa 1910-20 for the specific purpose of displaying this gorgeous and rare campaign box.

Classic Campaign style box with its brass bands on all sides and recessed carry handle on the top to protect it from damage whilst on campaign.

The lid opens on original brass hinges, to reveal a simple storage area. There is one separated shelf of secondary storage area on the right that would have been used for holding candles. The main storage area of the box would most likely be for the storage and transport of candelabras.

It sits on 4 cross banded and supported legs that make up the stand.

The original brass front lock is marked for “J. Bramah – Patent” with the Royal Crown symbol in 3 places. Unfortunately, we do not have the key.

Made of exotic mahogany with GORGEOUS patina and grain.

This box was made by Joseph Bramah and is EXCEPTIONALLY RARE and DESIRABLE !

Joseph Bramah (13 April 1748[1] – 9 December 1814), born Stainborough Lane Farm, Stainborough, BarnsleyYorkshire, was an English inventor and locksmith. He is best known for having invented the hydraulic press. Along with William George Armstrong, he can be considered one of the two fathers of hydraulic engineering

He was the second son in the family of Joseph Bramma (note the different spelling of the surname), a farmer, and his wife, Mary Denton.[2] He was educated at the local school in Silkstone and on leaving school he was apprenticed to a local carpenter. On completing his apprenticeship he moved to London, where he started work as a cabinet-maker. In 1783 he married Mary Lawton of Mapplewell, near Barnsley, and the couple set up home in London. They subsequently had a daughter and four sons. The couple lived first at 124 Piccadilly, but later moved to Eaton Street, Pimlico.

After attending some lectures on technical aspects of locks, Bramah designed a lock of his own, receiving a patent for it in 1784. In the same year he started the Bramah Locks company at 124 Piccadilly, which is today based in Fitzrovia, London and Romford, Essex.[4]

The locks produced by his company were famed for their resistance to lock picking and tampering, and the company famously had a “Challenge Lock” displayed in the window of their London shop from 1790 mounted on a board containing the inscription:

The artist who can make an instrument that will pick or open this lock shall receive 200 guineas the moment it is produced.

The challenge stood for over 67 years until, at the Great Exhibition of 1851, the American locksmith Alfred Charles Hobbs was able to open the lock and, following some argument about the circumstances under which he had opened it, was awarded the prize. Hobbs’ attempt required some 51 hours, spread over 16 days.

The Challenge Lock is in the Science Museum in London. An examination of the lock shows that it has been rebuilt since Hobbs picked it. Originally it had 18 iron slides and 1 central spring; it now has 13 steel slides, each with its own spring.

Bramah received a second patent for a lock design in 1798.

Bramah was a prolific inventor, and obtained 18 patents for his designs between 1778 and 1812

The complete Bramah lock can be disassembled into the following parts:

Joseph Bramah also made boxes and we believe that this is most certainly one of his.

Campaign furniture is a type of furniture made for travel. Historically, much of it was made for military campaigns.

Any furniture specifically made to break down or fold for ease of travel can be described as campaign furniture. It was designed to be packed up and carried on the march. It has been used by traveling armies since at least the time of Julius Caesar but it is commonly associated with British Army officers, many of whom had purchased their commissions. With the rise and expansion of the British Empire in the 19th and 20th centuries the demand by the military, administrators and colonists increased. British officers of high social position in the Georgian and Victorianperiods (1714–1901) often carried high-quality portable furniture.

The most common item of campaign furniture is the chest of drawers, often referred to as a military chest or campaign chest. Campaign chests’ primary wood was often mahogany, teak, or camphor, although cedar, pine and other woods were also used. The dominant type breaks down into two sections, and has removable feet. The brass corners and strapwork offer some protection and typify the distinctive “campaign look”.

A similar type of furniture was made for naval service, and even for merchant ships, which allowed furnishings to be used in port or peacetime, but stowed out of harm’s way in action, or during rough weather. Naval furniture is often extremely small, reflecting the cramped quarters available on ship. (Some sea-going pieces were also made for frequent travelers, or intended for permanent use after the journey.) Seagoing furniture sometimes has fiddle rails to prevent items from sliding off top surfaces; the fiddles were often themselves removable, with brass mounting sockets for the fiddle pins.

Some items of campaign furniture are instantly recognizable as made to dismantle or fold. Brass caps to the tops of legs, hinges in unusual places, protruding bolts or X-frame legs all give clues to the functionality of the piece. However, some pieces were designed to be up to date and fashionable. In such cases, as much of it looked like domestic furniture, it is harder to see how it dismantles. Ross and Co. of Dublin were innovators of campaign furniture design and much of their work is obviously Victorian in period. It only becomes apparent that their balloon back chairs dismantle when they are turned upside down and two locking bolts can be seen.

Condition: Very good. One very small crack to the right rear corner of the box.