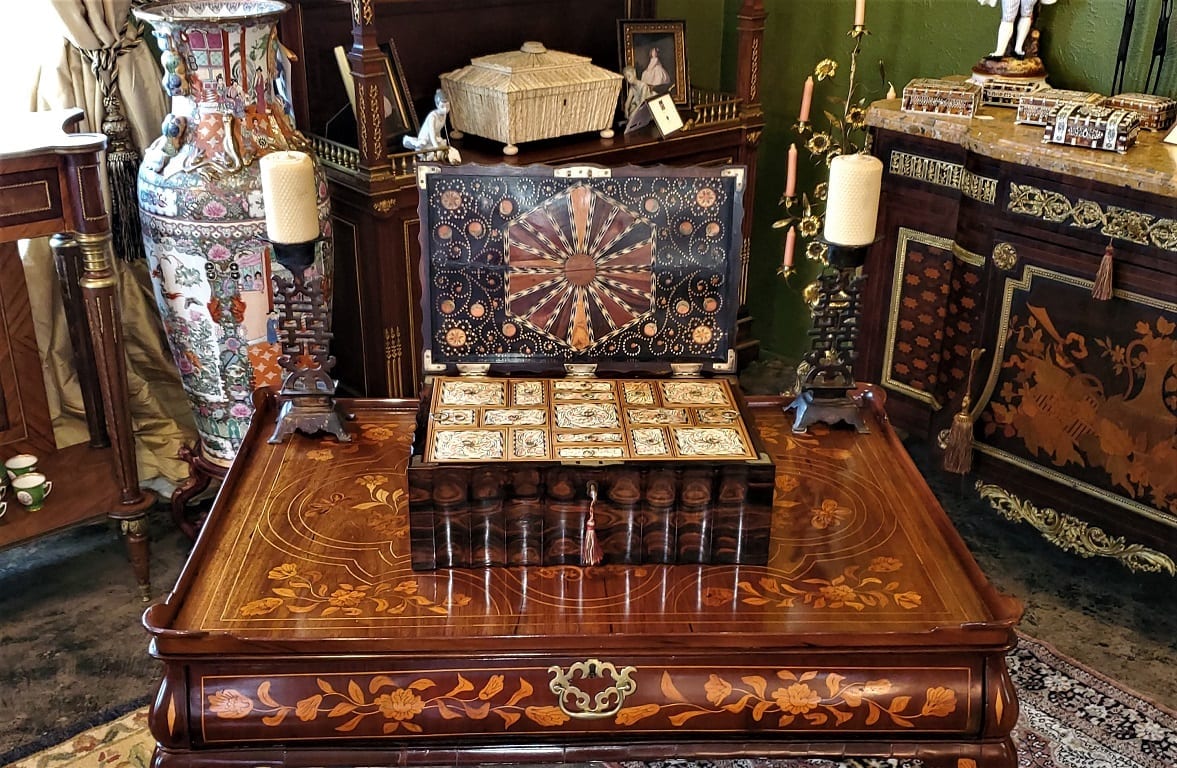 Made of rare and expensive Coromandel wood and inlaid on top with specimen exotic Asian woods, pewter, silver and bone.

The interior of the lid is likewise profusely inlaid with specimen woods in a hexagonal pattern, bone, ebony and pewter chevrons, over an ebony background with bone floral designs surrounding in the Galle style.

Box opens to reveal 2 trays on the interior….one on top of the other.

The top tray is highly ornate with bone overlay which has been hand-painted using red and black lac (indelible) inks.

The second tray is more plain (for obvious reasons) and made from sandalwood.

It has its working key and all the brass fittings are of the highest quality and original.

It has a crack on the lid but this does not detract from its beauty or importance !!

Made circa 1880 in Ceylon (modern day Sri Lanka) in the time of the Raj…….for export and sale to wealthy British visitors, Diplomats and Army officers.

This would have been a HIGHLY EXPENSIVE piece even when made.

Check out the matching Stationary Tray in this Section.

(1) Most of the best and highest quality Anglo-Indian boxes in the 18th and 19th Centuries were made in Vizigapatam, India………renowned for its exquisite craftsmanship in using ivory and tortoiseshell and lac decoration. These are referred to as ‘Vizigapatam Boxes’.

(3) Many boxes of exquisite quality and craftsmanship were made in Ceylon (modern day Sri Lanka) in the 19th Century. Ceylon was part of the British Indian Colony and was not a seperate Country at that time, hence, the boxes that were made in Ceylon are often categorized as Anglo-Indian. Many of the Anglo-Ceylonese pieces were made in the Goa Region using Porcupine Quill, Coromandel or Salamander wood, ivory, ebony and lac decoration. The Ceylonese lac work was often more colorful than the Vizigapatam classic use of black lac ink.(Lac ink was an indelible ink made from crushing Lac Beetles). Ceylonese boxes and furniture also became famous, due to the use of various exotic specimen woods in the decoration of their boxes and furniture. These specimen wood pieces are HIGHLY PRIZED AND HIGHLY DESIRABLE !!

CHECK OUT THE MATCHING ANGLO-CEYLONESE SPECIMEN WOOD STATIONERY TRAY ALSO IN THIS SECTION !

Provenance: Bought at Auction in the UK from one of the best known UK Auction Houses.

Condition: Crack on the interior and matching crack on the exterior of the lid. Not uncommon for coromandel wood due to shrinkage. The crack has been filled,…But in EXCEPTIONAL condition otherwise. 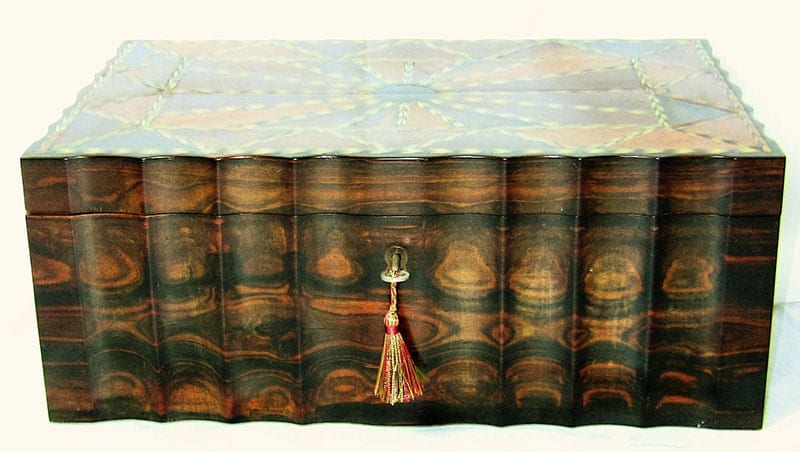 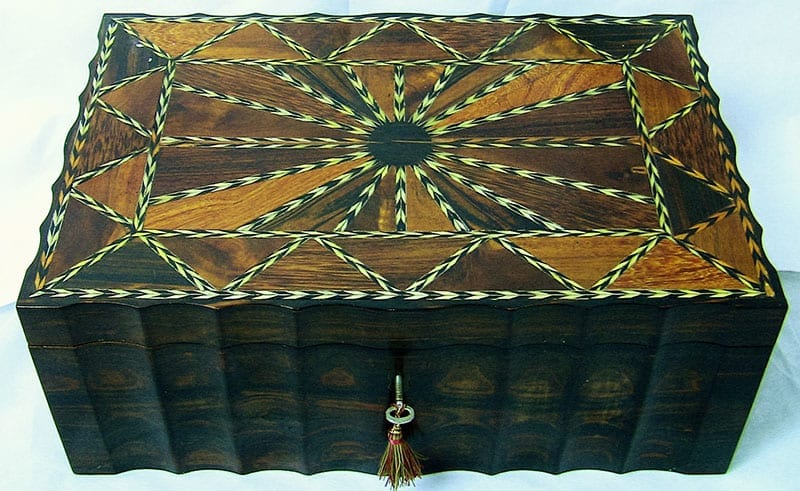 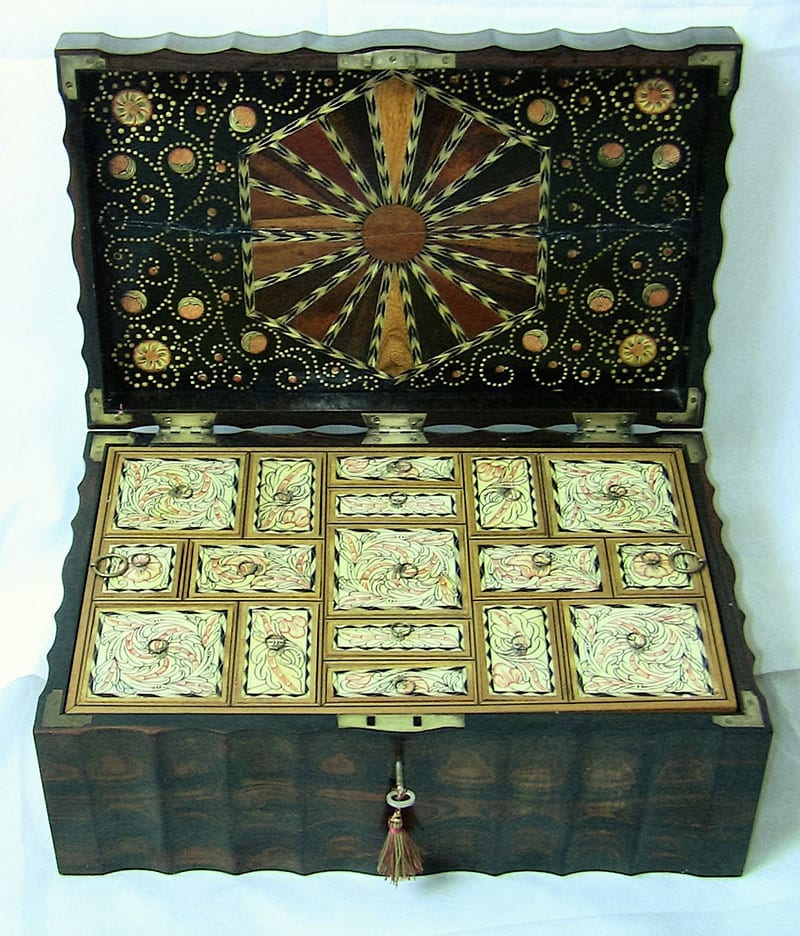 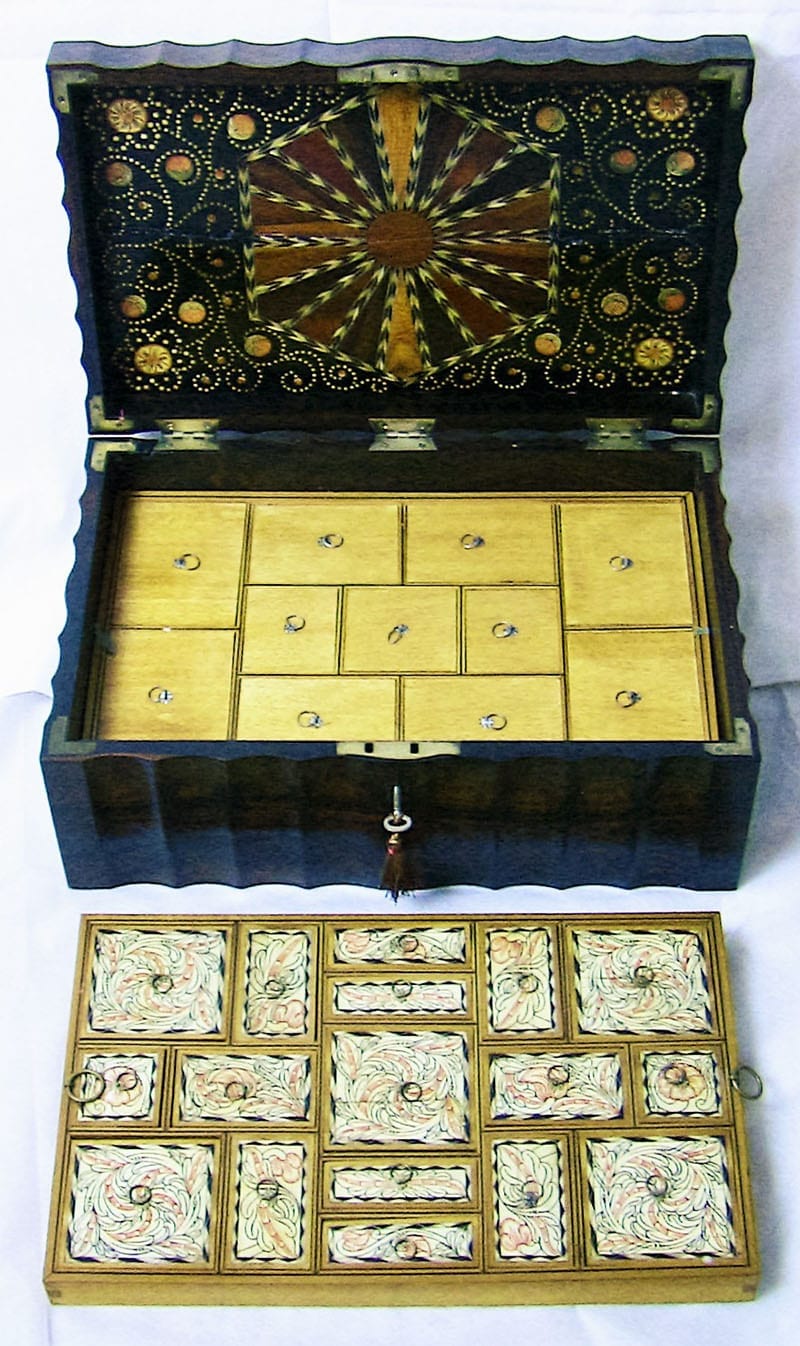 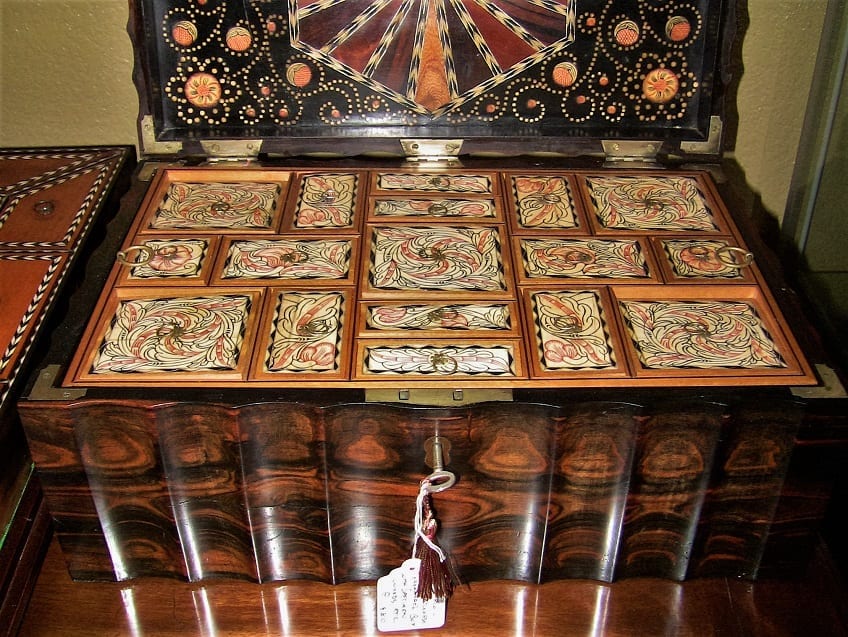 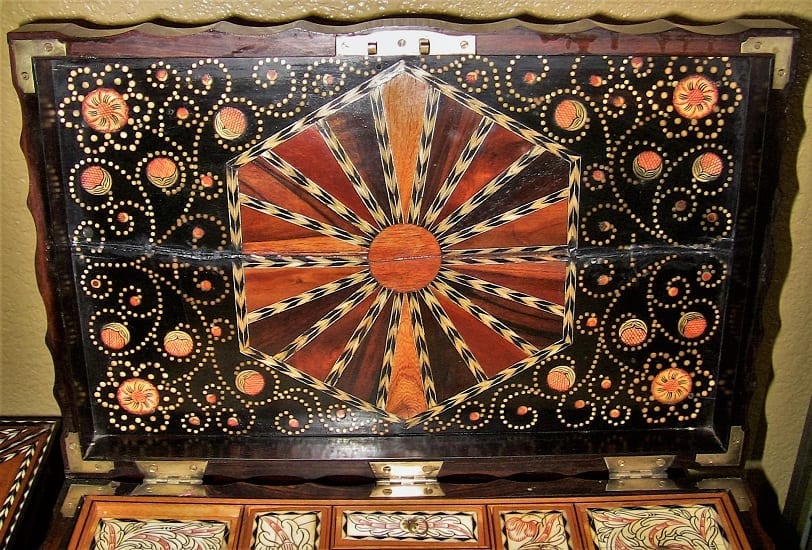 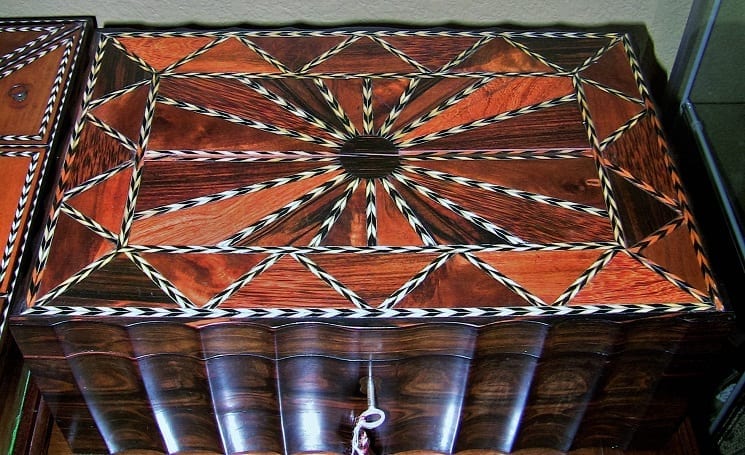 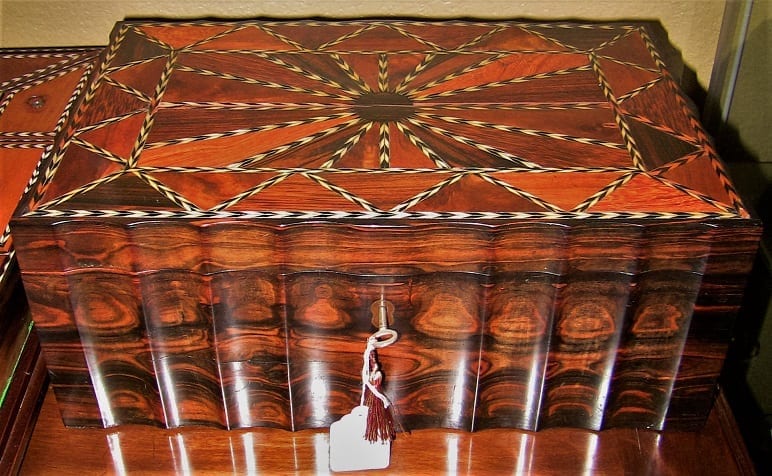 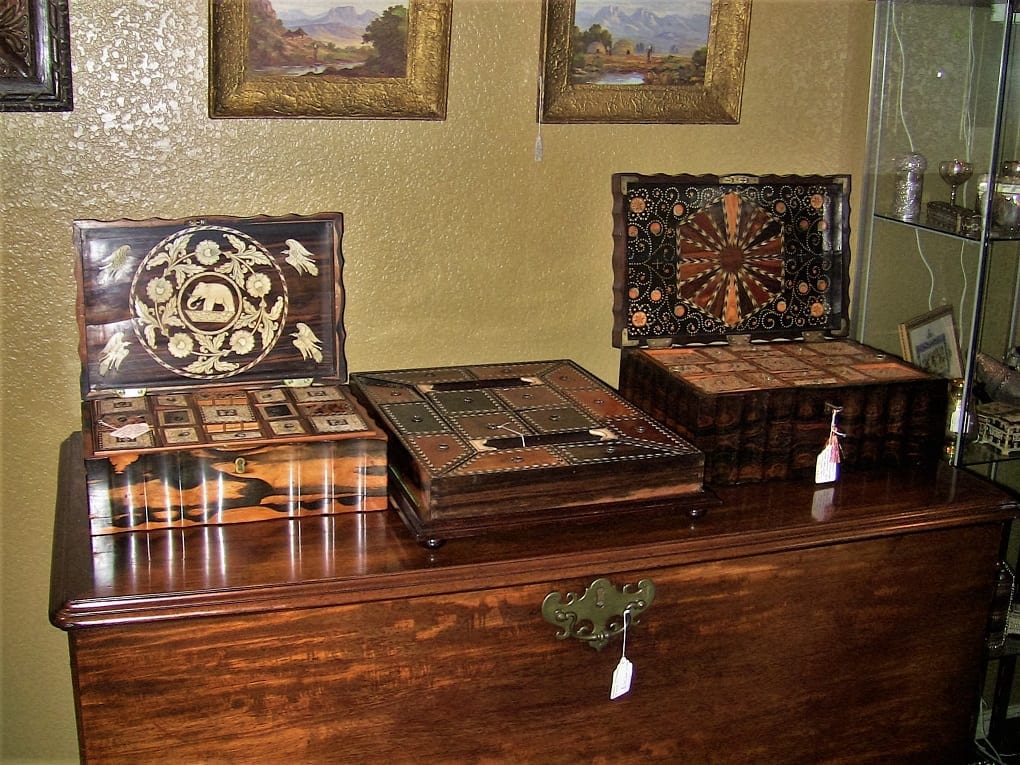