BBurago is a diecast metal brand of toy model cars. Originally the company was based in Burago di Molgora, Italy, where all products were made from 1976 to 2005. At its most popular, Bburago’s main competition were Politoys and Maisto, the latter of which was to become dominant in the 1:18 market segment around 2000. Bburago has been a brand under the Maisto umbrella since 2007.

Called Martoys from 1974 to 1976, the company was founded by Mario, Ugo, and Martino Besana, who had previously started Mebetoys, which they sold to Mattel (Force 1992, 124). While Mebetoys had been 1:43 scale, Martoys, however, focused on larger toys in 1:24 and 1:18 scales. Martoys was renamed BBurago in 1976. BBurago (with two “B’s”) is the correct spelling, ostensibly standing for both the town name as well as the name of the Besana family. It is an easy detail to miss, even a book presented by the revered auction house Christie’s misspells the name (Richardson 1999, p. 173).

Originally, the 1/18 scale range was aimed more at collectors, and BBurago was the link between European niche marketing in 1/43 scale and the 1/18 scale surge that occurred during the 1990s. BBurago was the first manufacturer to make this scale the main offering of the company, after Schuco, Gama, and Polistil pioneered larger offerings, but who by the late 1970s were going out of business. BBurago was also a contemporary of the mail order offerings of Franklin Mint Precision Models which were pricier, but sometimes of spotty quality. 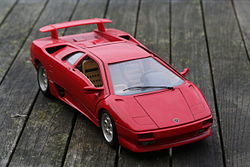 BBurago did not, however, stick strictly to 1/18, with smaller cars like the Renault Alpine A110 and the Fiat 500 presented in 1/16 and larger vehicles like the Ford F-150 pickup in 1/21. 1/24 was also a regular size. The Ford pickup, however, is an exception as European marques were a main focus of the Italian company. At first, offerings consisted mostly of 1930s cars, but later, more 1950s and 1960s models were introduced, like the Jaguar XK-E roadster. Finally, many contemporary high performance automobiles, like the Lamborghini Diablo, appeared and some of these were the company’s most popular sellers.

For cost savings, models were often duplicated from one scale to another. The “Diamond”, “Super”, and “Gold” ranges were the main lines in 1/18 scale with over 30 different models. Each vehicle would be offered in two or three colors and often in a roadster and coupe version (BBurago 1996). Differences in the ranges are hard to discern, but the Super line was more aligned to classic cars, while the “Gold” series had more deluxe packaging.

There were also several lines in 1/24 scale. These included the Grand Prix, Bijoux, VIP, and Super lines. The Super series included many normal coupes, sedans, and micro cars in rally and police liveries, with 45 different models (BBurago 1996). The Grand Prix line consisted of ten Formula One and Indy Cars.

The larger models usually had all apertures opening, had detailed engines, spare tires in trunks, working steering, windshield wipers and detailed instrument panels. A number of models also feature active suspension and removable wheels. Early on was there was a use of plastics for door and bonnet openings. These parts sometimes hindered fit and finish, and, after extended play, would stretch or bend, causing hoods and doors to not close properly.

BBurago’s 1/43 scale “Pocket” series consisted of about 36 offerings in about 60 separate liveries. These had simple ‘Hot Wheels’ inspired chrome on hard plastic tires, and no opening features, but were good value for the money (Rixon 2005, p. 76). Though oriented more to children in price (often selling for only a couple of dollars), 1/43 model detail was excellent and the presentation, like the early Saab 900 or the long-lived MCA / Méga Monte Carlo model (one version with Russian MIG sponsorship), were quite attractive (BBurago 2000).

By the late 1990s, BBurago no longer had a main corner on the 1/18 collector market as many competitors of both high end and low were now producing models. Some of these were Exoto, Maisto, Yatming, Ertl, Mira, Revell, Jouef, Chrono, Anson, and also Mattel, to name a few. Maisto became the main diecast brand in larger scales and began to eclipse most other manufacturers.

Many of these companies had an edge as their products could be produced with far cheaper labor in Thailand and China, while BBurago continued more expensive production in Italy. In October of 2005, BBurago declared bankruptcy, and the receivers were called in. Many companies expressed interest in the tooling. Fortunately, the venerable toy name of BBurago was not left to die, but was finally purchased by Mae Cheong (Maisto) from the bankruptcy court in early 2006. This essentially marked the end of Italian mass produced (and also one of the last European manufactured) affordable diecast vehicles.

Prior to its closure, the company was also hard-hit by an exclusive promotional contract granted to Mattel for the production of model Ferraris. As much money had been invested in the tooling to produce these models, the company was adversely affected. This contract has now changed and other diecast manufacturers (including BBurago) are again making miniatures of the prancing horse, but at the time this stretched BBurago’s finances.

1:18 scale is a traditional scale (ratio) for models and miniatures, in which 18 units (such as inches or centimeters) on the original is represented by one unit on the model. Depending on application, the scale is also called two third inch scale since 1 foot is represented by 2/3 of an inch.The scale is used for 1:18 scale diecast automobile models, military vehicles, armor, and aircraft. 1:18 scale is also commonly used for dollhouses intended for children to play with. The G.I. Joe: A Real American Hero line of figures are in 1:18 scale, although the figures are often more compatible with 1:16 & 1:18 military vehicles rather than 1:18 cars.Attractions of the 1:18 scale include its size and its corresponding level of detail. Many 1:18 scale automobiles are over 11 inches long, while 1:18 aircraft may reach over 3 feet in length. 1:18 models often include many intricate details and moving parts not commonly found on models in smaller scales. 1:18 model cars are available as kits, where the enthusiast builds the model from start to finish. Other 1:18 subjects are sold in completed or near-completed state, requiring only minor assembly.