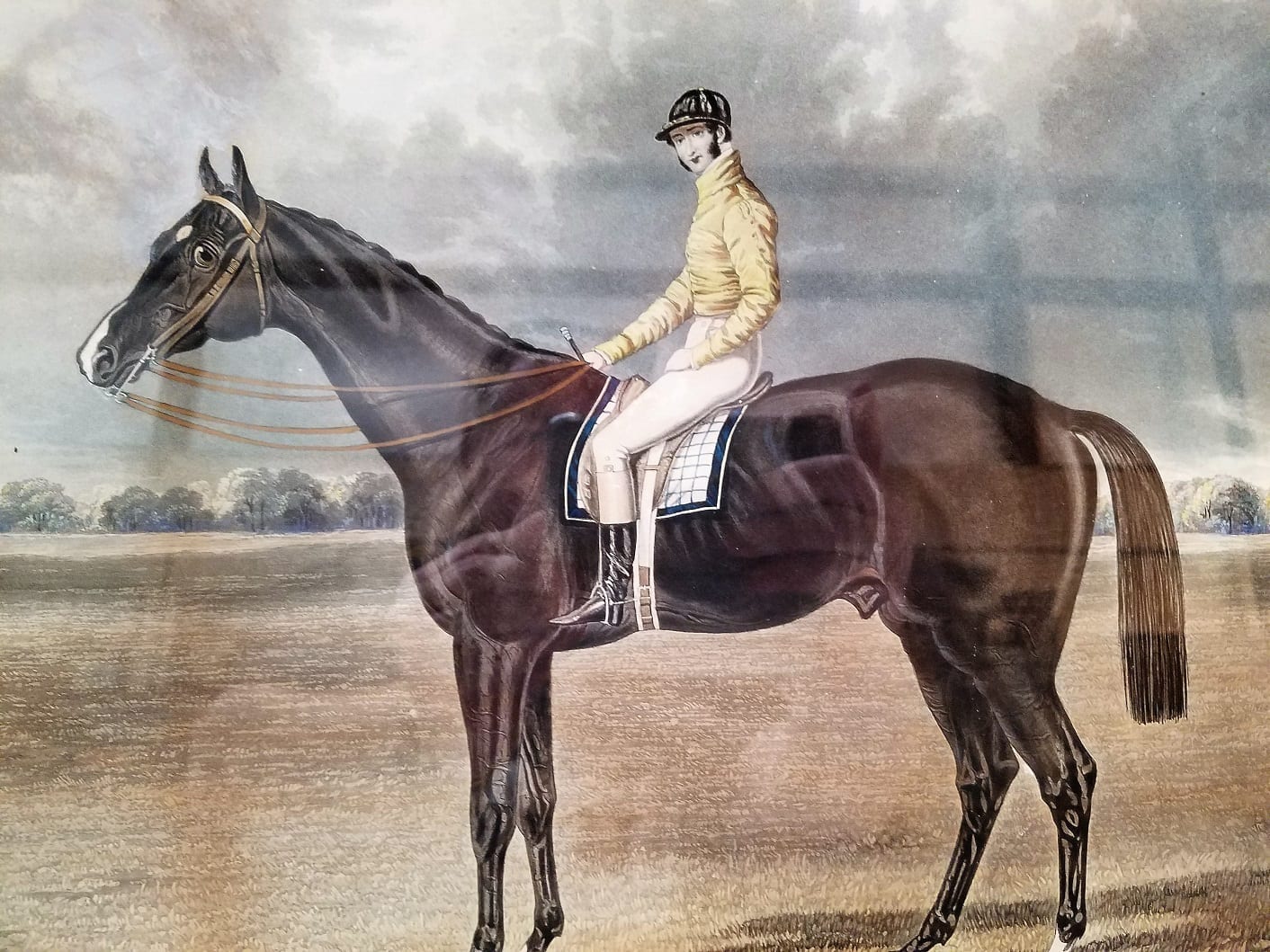 This original engraving is of “Launcelot” ….”The Winner of the Great St. Leger Stakes at Doncaster, 1840” shown with his victorious rider/jockey…Bill Scott.

The engraving reports that of the 1840 St. Leger…there were 112 Subscribers of which 11 started.

Launcelot’s breeding is recorded on the print as being “Launcelot is own Brother to Touchstone, who won the Great St. Leger Stakes in 1834, and the Gold Cup at Doncaster in 1835 – 6, was bred by the Marquis of Westminster, Got by Camel out of Banter/ bred by his Lordship  in 1826 by Master Henry out of Boadicca, sister to Bucephalus.”.

The Owner of Launcelot is recorded as ” The Property of The Most Noble The Marquis of Westminster.”.

“To Whom this Print by permission is most respectfully dedicated by the Publishers…. S & J Fuller”.

The engraving is also stamped with the words “Proof”.

This Aquantint beautifully captures the Winning Horse and Jockey that were victorious in the 1840 running of the St. Leger Stakes at Newmarket by John Frederick Herring, Sr.., one of Great Britain’s most renown sporting artists who did commissioned work for the Duchess of Kent and Queen Victoria. Herring’s Original aquatint, hand-colored prints are EXTREMELY POPULAR and HIGHLY SOUGHT AFTER. The engraving is  presented under glass in its original oak frame with gilt fillets.

This ORIGINAL Chromolithograph or hand colored aquatint of Launcelot is by the VERY FAMOUS and HIGHLY DESIRABLE and SOUGHT AFTER British Artist John Frederick Herring Senior.

The engraving is HUGELY IMPRESSIVE, EXCEEDINGLY RARE and in SUPERB CONDITION for its age !

The use of the words “Proof” on the engraving lead us to believe that this is possibly the first ever print of Launcelot by Herring. It is common practice for engravers when the have made the original engraving plate to run off a “Proof” of the plate for the Artist’s approval. If the Artist was happy with the ‘proof’ he would proceed to hand color it and send it back to the engraver and publisher with his seal of approval. THEREFORE, the use of the words “proof” on this engraving are VERY IMPORTANT and SIGNIFICANTLY ADD TO the Print’s Value and Rarity.

Launcelot (1837–1861) was a British Thoroughbred racehorse and sire best known for winning the classic St Leger Stakes in 1840. In a racing career which lasted from September 1839 until July 1841 he won four of his seven races although two of his victories came by way of walkover. As a two-year-old he proved himself to be one of the leading colts of his generation by winning the Champagne Stakes at Doncaster. In 1840 he started favourite for the Epsom Derby but was beaten by a 50/1 outsider Little Wonder. Later that year he recorded his most important victory when he defeated his stable companion Maroon in the St Leger. He was injured on his only appearance as a four-year-old and was retired to stud where he had little success as a sire of winners.

Launcelot was a brown colt with a white star and snip and two white feet bred by his owner Robert Grosvenor, 1st Marquess of Westminster. He was the seventh of seventeen foals produced by his owner’s broodmare Banter (1826–1849). Her first foal had been Launcelot’s full-brother, the outstanding racehorse Touchstone.[1] Banter also produced Sarcasm, the dam of the 1841 St Leger winner Satirist.[2]

Launcelot was sired by Camel, a horse who won the Port Stakes at Newmarket Racecourse before becoming a successful breeding stallion. Apart from Launcelot and Touchstone he sired the Ascot Gold Cup winner Caravan.[3]

Lord Westminster sent the colt into training with John Scott who trained the winners of forty classic races at his base at Whitewall stables, Malton, North Yorkshire.

Launcelot was scheduled to make his first appearance in the Hornby Stakes at York Racecourse on 21 August. All but one of the other horses entered were withdrawn, and when Launcelot’s only remaining opponent failed to appear, Lord Westminster received a forfeit of 50 sovereigns.[4] On 16 September the colt had his first competitive race in the Champagne Stakes at Doncaster’s St Leger meeting in which he was ridden by his trainer’s brother Bill Scott and started 5/4 favourite. He started poorly, but took the lead after a furlong and held off the late challenge of Lord Kelburne‘s unnamed chestnut colt to win by a neck.[5] On the following day he walked over for a Produce Stakes over the same course and distance.[6] Launcelot ran for the third time at the meeting when he contested a sweepstakes two days later. He started 5/2 favourite but finished second of the ten runners, a neck[7] behind the Duke of Cleveland‘s brother to Euclid (later named Theon).[8]

On 3 June 1840, Launcelot made his debut as a three-year-old in the Derby Stakes at Epsom Downs Racecourse. Ridden by Bill Scott he was made 9/4 favourite in a field of seventeen runners, with Assassin and Mr Etwall’s unnamed Melody colt joint second-favourites on 7/2. Launcelot was among the leaders from the start and got the better of a sustained struggle with the Melody colt in the straight,[9] but was overtaken in the final furlong by the 50/1 outsider Little Wonder and finished second by a length.[10] Bill Scott reportedly shouted an offer of £1,000 to Little Wonder’s jockey to “pull” his horse in the closing stages, but was rejected.[11] Launcelot recorded his first “win” of the season in his next race, when he was allowed to walk over for a Produce Sweepstakes at Liverpool in July.[12] At York in August Lord Westminster was able to claim another prize without having to run his colt when Launcelot’s opponents were withdrawn from a two-miile sweepstakes.[13]

On 15 September Launcelot was one of eleven three-year-olds to contest the sixtieth running of the St Leger Stakes at Doncaster. He started the 7/4 favourite ahead of Gibraltar and Maroon, another colt owned by Lord Westminster. Ridden as usual by Bill Scott, Launcelot took the lead early and set a steady pace. The favourite broke down in the straight but held on to win a “strange”[14] race from Maroon, with Gibraltar a neck behind in third.[15] There were suspicions that Maroon had been deliberately held back to allow his stable companion to win.[14] A day after his win in the St Leger, Launcelot was scheduled to run in the Foal Stakes over one and a half miles against Mr Bowes‘ colt Black Beck. After the other runners were withdrawn, Black Beck was allowed to walk over the course, with Bowes and Lord Westminster dividing the forfeits.[16]

STUD: Launcelot was retired from racing to become a breeding stallion, but appears to have had little success. In 1848 he was recorded as standing at Bangor in Ireland at a fee of eight shillings.[18] Launcelot died in 1861 at the age of twenty-four.

Charles Hunt (1803 – 1877) was one of the Victorian Era’s finest engravers. He worked closely with John Frederick Herring Snr and Jnr and S & J Fuller Publishers.

S. & J. Fuller were renowned London based publishers from 1809 to 1862. They had their premises at 34 Rathbone Place, London.

SIMILAR HERRING PRINTS HAVE BEEN SOLD BY CHRISTIES AND OTHER WELL KNOWN AUCTION HOUSES FOR THOUSANDS IN THE PAST !!

The engraving has some very minor discolorations in the original paper. However, this is consistent with it’s age and not serious.

We would not recommend any restoration to this print.

We are of the opinion that this is an ORIGINAL ENGRAVING and is just beautiful the way it is. It is historical…..looks historical and exudes it’s age and quality !

Provenance: Bought from a Collector in Dallas 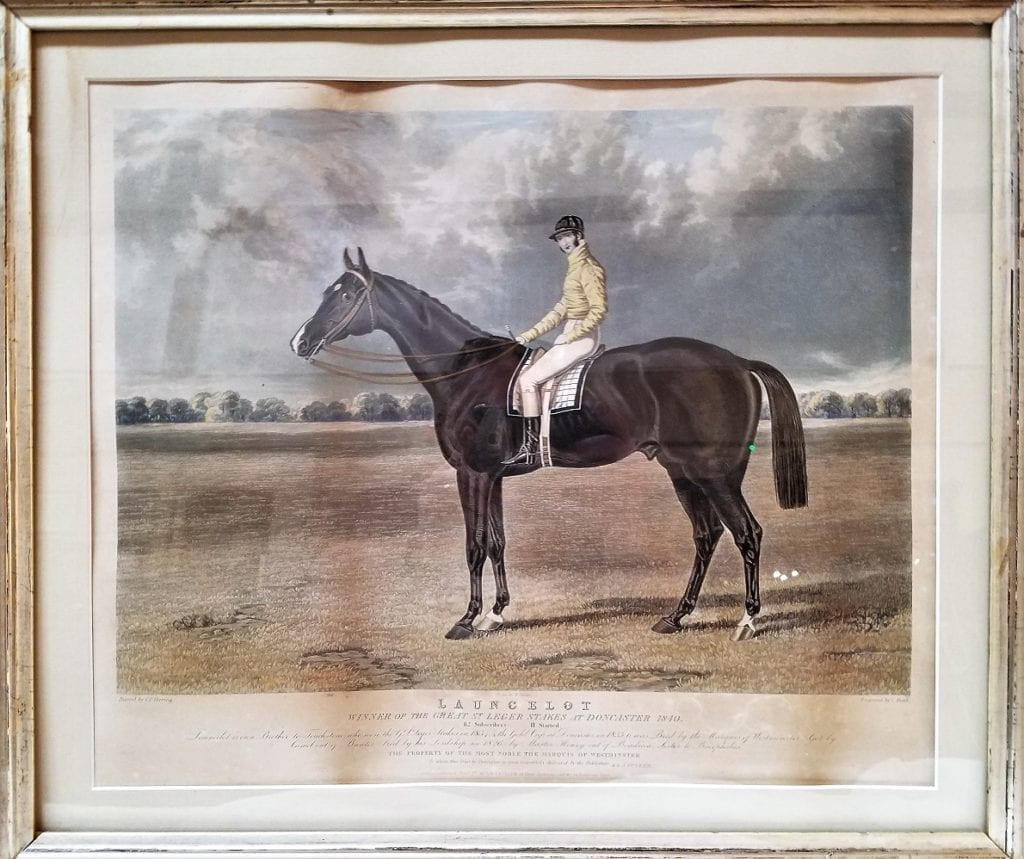 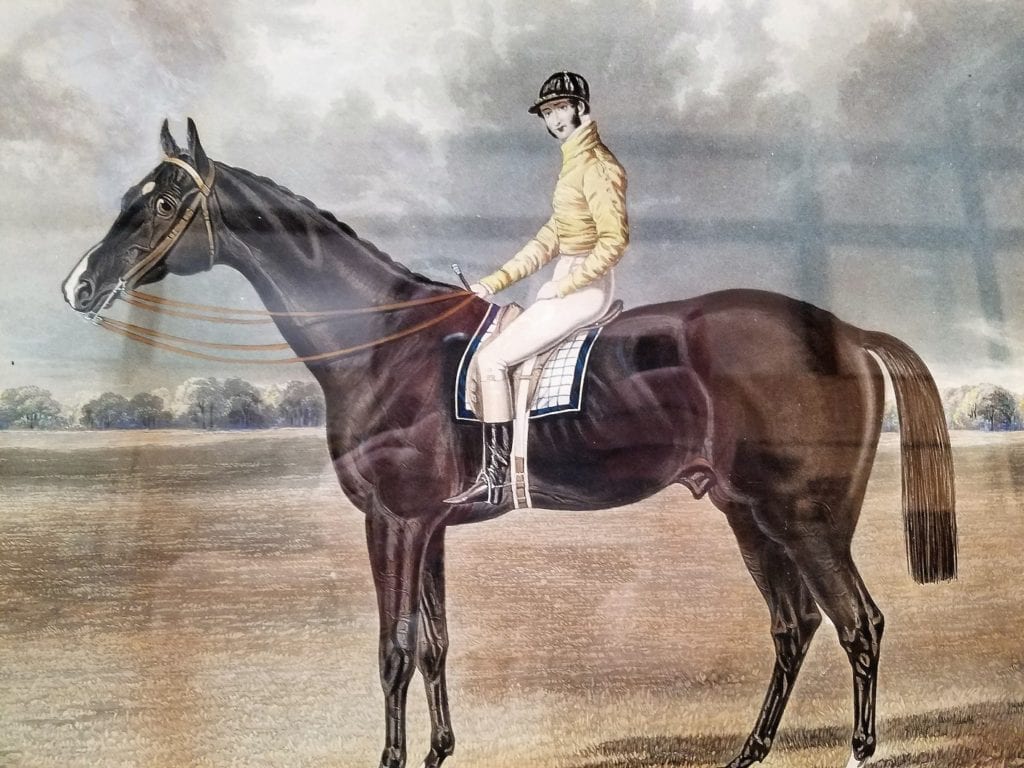 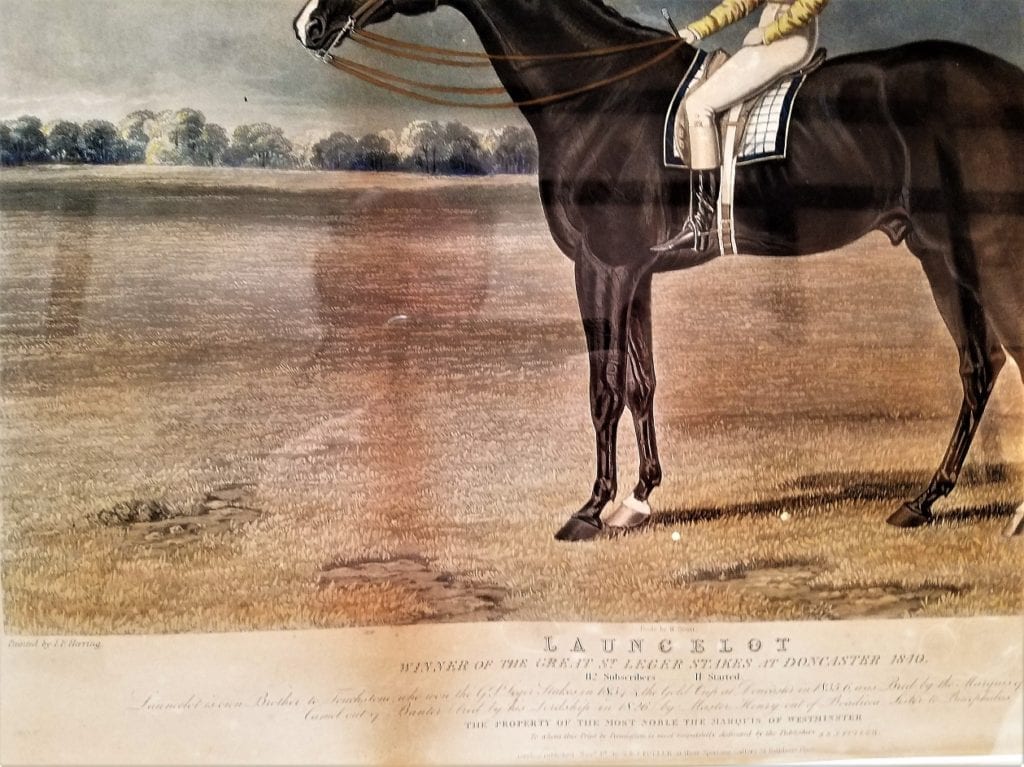 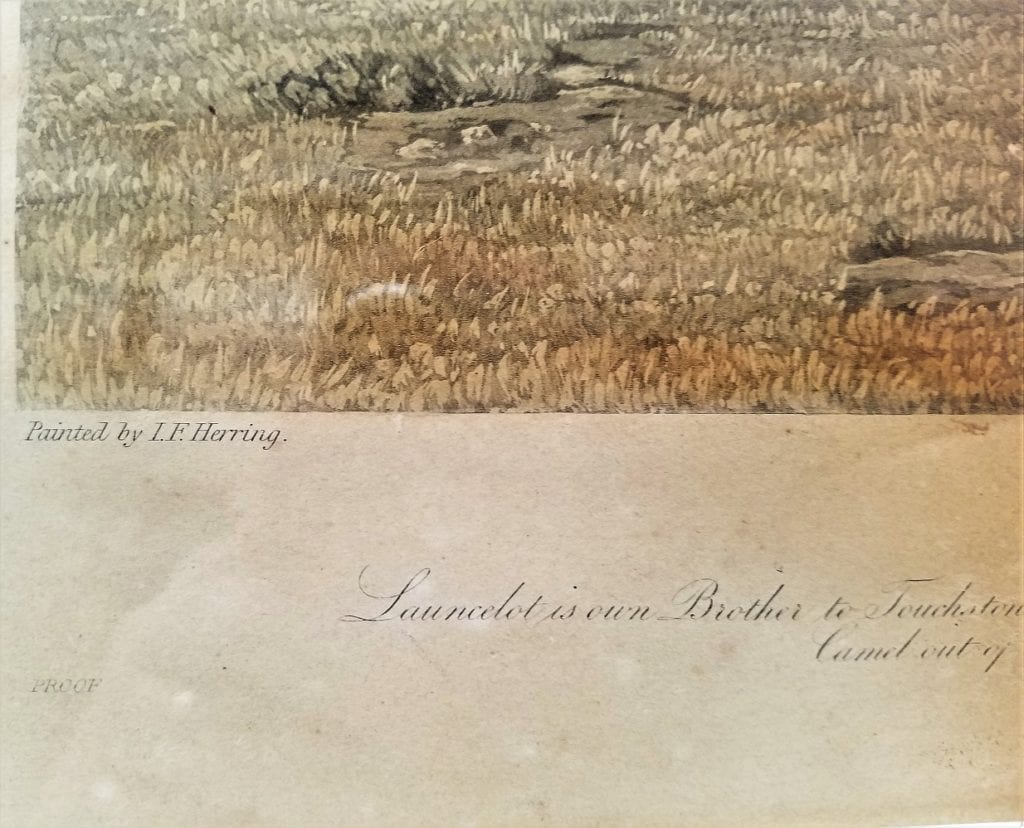 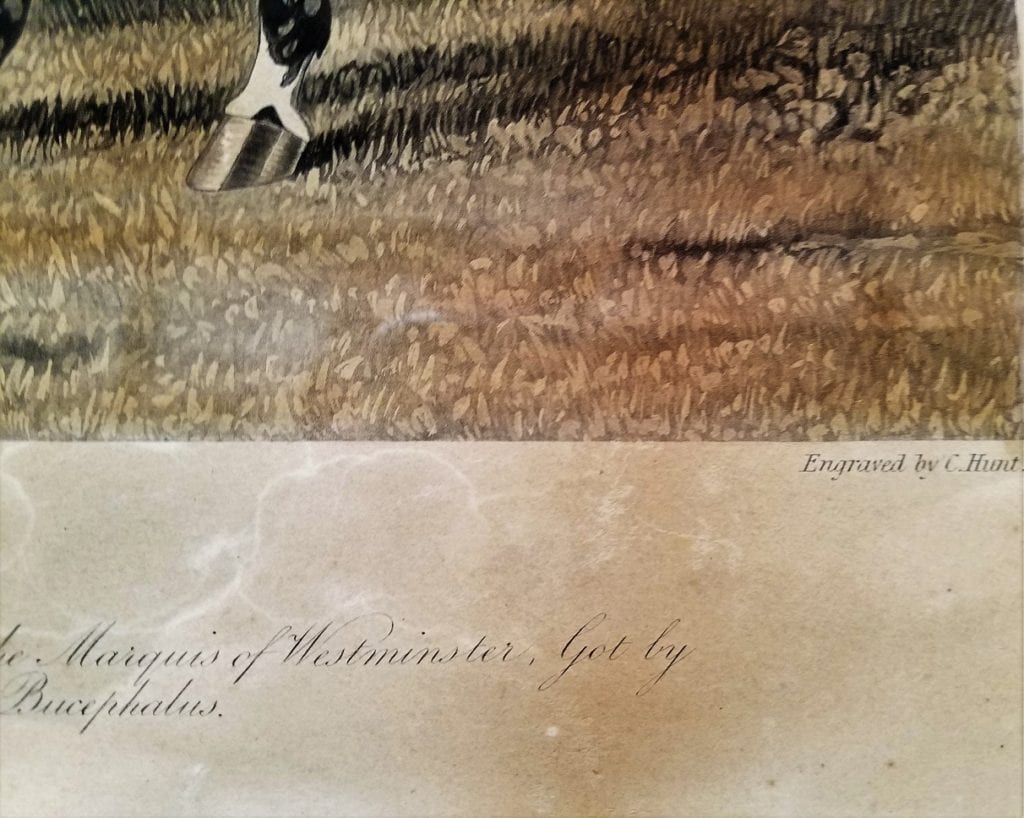 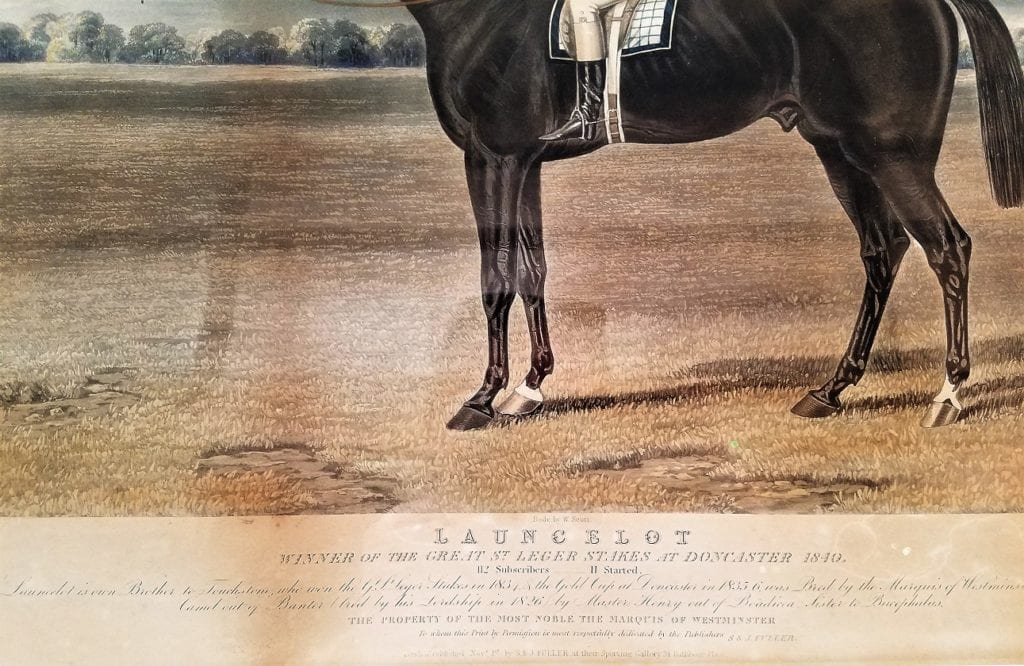 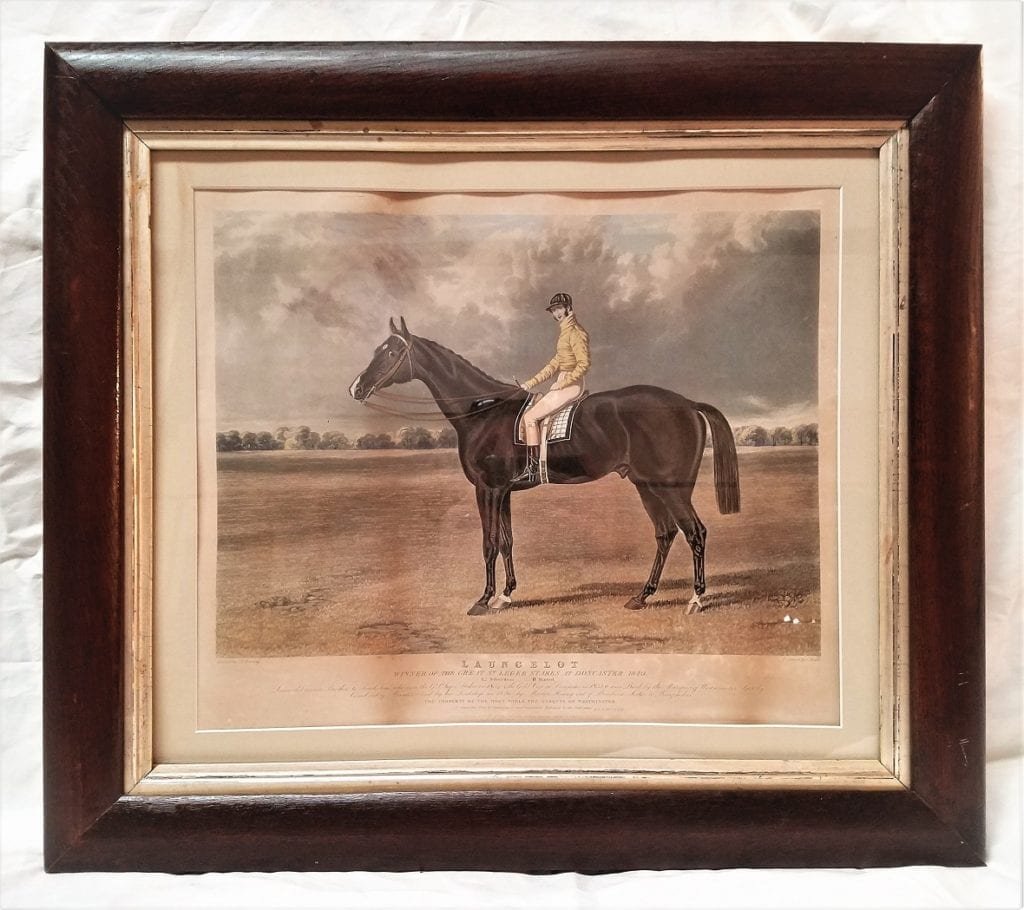