One for the Collector of Pocket Watches, Waltham, American Collectibles and Horology.

This Waltham Pocket Watch was made in 1893 and was sold at the World Fair in Chicago that year.

Waltham exhibited at the World’s Fair and sold these watches and personalized them for the buyer. The buyers name was inscribed on the face dial(but it has been ‘rubbed’ by wear and tear over the years so that we cannot make out the name of the original owner.The smaller dial or second hand dial was then inscribed with the Chicago World’s Fair, to record that it was sold there.

Made by P.S. Bartlett.

Silveroid Case made by Keystone. In 1885 the company name changed to the American Waltham Watch Company (AWWCo).

Every watch movement that the company produced was engraved with an individual serial number. That number can be used to estimate the date of production. Volunteers have created a database of Waltham serial numbers,[1] models and grades,[2] and descriptions of observed watches.

The World’s Columbian Exposition (the official shortened name for the World’s Fair: Columbian Exposition,[1] also known as the Chicago World’s Fair and Chicago Columbian Exposition) was a world’s fair held in Chicago in 1893 to celebrate the 400th anniversary of Christopher Columbus‘s arrival in the New World in 1492.[2] The centerpiece of the Fair, the large water pool, represented the long voyage Columbus took to the New World. Chicago bested New York City; Washington, D.C.; and St. Louis for the honor of hosting the fair. The Exposition was an influential social and cultural event and had a profound effect on architecture, sanitation, the arts, Chicago’s self-image, and American industrial optimism.

The layout of the Chicago Columbian Exposition was, in large part, designed by John Wellborn Root, Daniel Burnham, Frederick Law Olmsted and Charles B. Atwood.[3][4] It was the prototype of what Burnham and his colleagues thought a city should be. It was designed to follow Beaux Arts principles of design, namely French neoclassical architecture principles based on symmetry, balance, and splendor. The color of the material generally used to cover the buildings facades gave the fairgrounds its nickname, the White City. Many prominent architects designed its 14 “great buildings”. Artists and musicians were featured in exhibits and many also made depictions and works of art inspired by the exposition.

The exposition covered more than 600 acres (2.4 km2), featuring nearly 200 new (but purposely temporary) buildings of predominantly neoclassical architecture, canals and lagoons, and people and cultures from 46 countries.[2] More than 27 million people attended the exposition during its six-month run. Its scale and grandeur far exceeded the other world’s fairs, and it became a symbol of the emerging American Exceptionalism, much in the same way that the Great Exhibition became a symbol of the Victorian era United Kingdom.

Dedication ceremonies for the fair were held on October 21, 1892, but the fairgrounds were not actually opened to the public until May 1, 1893. The fair continued until October 30, 1893. In addition to recognizing the 400th anniversary of the discovery of the New World by Europeans, the fair also served to show the world that Chicago had risen from the ashes of the Great Chicago Fire, which had destroyed much of the city in 1871.[2]

On October 9, 1893, the day designated as Chicago Day, the fair set a world record for outdoor event attendance, drawing 751,026 people. The debt for the fair was soon paid off with a check for $1.5 million (equivalent to $40 million in 2016).[5] Chicago has commemorated the fair with one of the stars on its municipal flag.

Almost all of the fair’s structures were designed to be temporary; of the more than 200 buildings erected for the fair, the only two which still stand in place are the Palace of Fine Arts and the World’s Congress Auxiliary Building. From the time the fair closed until 1920, the Palace of Fine Arts housed the Field Columbian Museum (now the Field Museum of Natural History, since relocated); in 1933 (having been completely rebuilt in permanent materials), the Palace building re-opened as the Museum of Science and Industry.[45] The second building, the World’s Congress Building, was one of the few buildings not built in Jackson Park, instead it was built downtown in Grant Park. The cost of construction of the World’s Congress Building was shared with the Art Institute of Chicago, which, as planned, moved into the building (the museum’s current home) after the close of the fair.

Three other significant buildings survived the fair. The first is the Norway pavilion, a recreation of a traditional wooden stave church which is now preserved at a museum called Little Norway in Blue Mounds, Wisconsin. The second is the Maine State Building, designed by Charles Sumner Frost, which was purchased by the Ricker family of Poland Spring, Maine. They moved the building to their resort to serve as a library and art gallery. The Poland Spring Preservation Society now owns the building, which was listed on the National Register of Historic Places in 1974. The third is the Dutch House, which was moved to Brookline, Massachusetts. 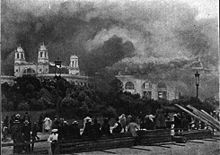 The 1893 Viking ship that was sailed to the Exposition from Norway by Captain Magnus Andersen, is located in Geneva, Illinois. The ship is open to visitors on scheduled days April through October.[46]

The main altar at St. John Cantius in Chicago, as well as its matching two side altars, are reputed to be from the Columbian Exposition.

Since many of the other buildings at the fair were intended to be temporary, they were removed after the fair. The White City so impressed visitors (at least before air pollution began to darken the façades) that plans were considered to refinish the exteriors in marble or some other material. These plans were abandoned in July 1894, when much of the fair grounds was destroyed in a fire.

Condition: In silveroid case which is of the same date or time period. It was not that unusual for Waltham Watches to be sold with these cases. Some ‘rubbing’on the face dial.